They cut off D's head.

Seriously, Vampire Hunter D - despite being animated and edited exclusively on film, was created as an OVA. Which means it was intended to be seen on video on a 1980's Japanese TV set. Clearly amazing AKIRA level animation was never quite the goal of this production, but what's important is the ratio it was shot in. Created to be released on video, the film was clearly shot for a square 1.33:1 aspect ratio. The German studio OVA Films, in their infinite wisdom, decided that nobody has old square TV's anymore. EVERYBODY owns those kick-ass widescreen 16:9 TV's with a 1.78:1 aspect ratio (even though the majority of consumers - in America and Europe - don't yet). So what did those hip mother fuckers do? They chopped 30% of the picture off of the top and bottom so that Vampire Hunter D looks bitchin' filling up your $10,000 plasma. Screw artistic integrity when you have new technology to fuck it up on!

To be fair, this is far from a new problem. In the anime world specifically, the Rurouni Kenshin: Trust and Betrayal (aka SAMURAI X... wtf?) OVA's were actually cut together in to a 2 hour movie and matted to non-anamorphic 1.78:1 widescreen to match their sequel series. Urotsukidoji OVA 12 has been matted to roughly 1.78:1 widescreen for every single one of it's DVD releases worldwide - US, Japanese, UK, French and what have you - and the German edition is so awesome it crops episodes 10 and 11 too! And my personal favorite is the Anniversary Edition of Ninja Scroll. Now, much like Vampire Hunter D, Jubei Ninpouchuu (the original title... what damned scroll is Manga talking about?) was an OVA made in the days of boxy non-HD TV's. So Mangle Entertainment is nice enough to give us the fullscreen version on Side B, and includes an anamorphic version on Side A. But, here's the funny part: Manga didn't do a new telecine for the anamorphic version. So there's absolutely no more detail in the widescreen version than there is the fullscreen version, which is the whole point of anamorphic encoding! The inclusion of the widescreen print of Ninja Scroll is literally the single most pointless things I can think of... and to prove it, here's some booty! 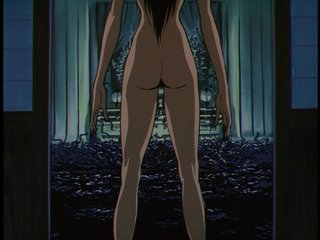 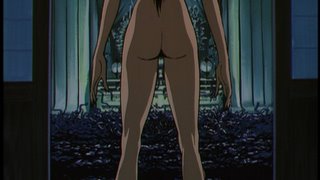 So, there's your ass quota for the day. Once you're done mopping up various bodily fluids, note that while the fullscreen version has sharp details on the snakes and crisp outlines in this lady's fine hindquarters, the widescreen version is in comparison very fuzzy and doesn't feature any more apparent detail. In short, this "anamorphic" version gives the very format a bad name, and is exactly the kind of bullshit that makes me want to bitch slap the people at Manga Entertainment. All this having been said, I WILL admit that they were smart enough to include both versions, so that the widecreen version "exists" is no skin off my ballsac. It's just frustrating that so much time and money would be wasted on it instead of more extras or a lower price tag. Gotta' love those cigar smoking rollerskating chimps at Manga Entertainment.

So, widescreen = teh suck on fullscreen films, right? This won't be the first time a fullscreen film is matted to fill a TV set without justification: The Evil Dead was clearly never meant to be shown in widescreen (regardless of the fact that Sam Raimi was clearly intending to get the film shown in theatres), Return of the Living Dead 3 was a direct to video release despite it's anamorphic (and R-rated!) US edition, and - screw DVD for a second - the Venice premier of A Snake in June was in widescreen... even seeing a moment of it that way made me shudder and shake my head in disgust. While plenty of films WERE intended to be shown in widescreen despite their fullscreen origins - Black Chrismas, Terminator 2, Manhunt, Cannibal Holocaust, A Fish Called Wanda, The Princess Bride, Full Metal Jacket, and so many others - snipping the top and bottom from a film that was meant to be shown in fullscreen is no better than a pan-scan version of a movie shot in widescreen.

So... here's why the difference between the Widescreen and Fullscreen version of Vampire Hunter D is such a painful thing for me to choose between: 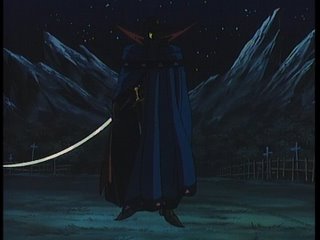 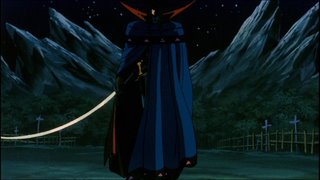 It should be noted that the "official" Kentai transfer I was so goddamn proud of is currently under evaluation. I still think the OVA Films transfer is too goddamn bright, but I also think - now that I have something to compare it to - that the Japanese DVD is just way too... blue. Like the red levels are undersaturated for some weird reason. Probably because Red usually bleeds the worst on composite transfers and the technitians who made this telecine 20+ years ago tried their damndest to minimise the damage that old-fashioned composite data is prone to. A nice trick to keep it from bleeding like a bastard... but it doesn't exactly make the grass look greener this side of the OVA Films transfer.

Oh yeah - the full-screen shot is from the Japanese DVD without any Kentai TMPGEnc magic applied to it yet. So that's now how my DVD will look, per se; I'm just trying to show how wildly different these two prints are. Just look at the deep red in D's collar and the green grass and black sky on that German screencap... the colors are beautiful. You can also see a lot more detail in the trees and mountains behind D - open them both in new tabs or windows or whatever and click back and fourth between the two so you can see just how much more detail there is. This is exactly why even old cheap cel animation in High Definition would kick ass... and unfortunately, why I worry that old fullscreen prints will be butchered like so for the good of technology.

I also chose this shot to make my argument that this film being cropped doesn't help it. Some scenes look OK cropped, truth be told... but here, D's head AND feet mysteriously dissapear. Weak, OVA Films. If only they had the foresight to make a telecine from the same master in fullscreen and make the German release a 2 DVD set with both then every single D hard-on posessing fan would own it. But no, Germany has issues when it comes to releasing anime on DVD for some retarded reason.

So, what am I do do when I have an ugly fullscreen master and a gorgeous widerscreen master? While I refuse to retract my above "chimp" statement, I'm going to follow Manga's example and release the best of both worlds. While I wouldn't watch the amazing-yet-cropped master as anything but a show-off piece or a curiosity, it -is- a beautiful transfer. No rainbows, no dot crawl, natural film grain, far less artifacts... I CAN'T say it's perfect, missing 30% of the image, but it's the best looking film to DVD work done for Vampire Hunter D yet.

It's just a goddamn shame they forgot to transfer the whole thing.

UPDATE (08/23): Here's a comparison between the Japanese DVD, German DVD and my own personal concoction: tell me what you think, will 'ya? 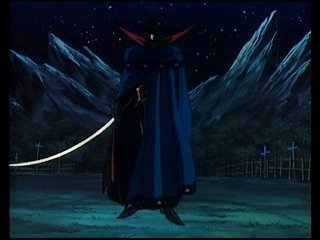