A summary of the conversation I had with my boss regarding the newest set of exploitation videos we're releasing:

Me: "I got 3 discs today. The extras definitely need subtitles. I can try to translate them, but last time... that didn't go so well."

I've successfully translated the first 5 minutes of the making-of... the rest of it I'm not convinced I can do. Likely I'll take a crack at the 10 minute interview and see how that turns out. If I can do that, the rest of the making-of I can probably fake my way through and still come out with a translation reasonably close to the original dialog. Unfortunately, it won't be fast, it won't be fun, and goddamn it, it will be cheap for the translator, wither it's me or not.

I asked a fluent friend of mine to give it a look over. He agreed that it was a pain in the ass and that the money wasn't really worth it. So, I call up my boss again, and do the smart thing; tell him the truth, that any translation I give him will be incredibly incomplete, and potentially wrong.

Not that anyone will ever care, and likely only a half-dozen people who even know better would ever watch these piles of shit in the first place, but still. This is the stupid crap that keeps me up at night.

His reply? "If you only pick out like, 3 words out of 7, just roll with it. It doesn't really bother me."

The moral of this story is, to all you international licensors out there, include a shooting script. Or a transcript. SOME kind of script so the poor bastard who has to translate your awful movie isn't sitting there with a crappy pair of headphones going "Shit, rewind it- there? No, here... what the hell did he say while that other guy was coughing? Something about... radishes? No, about house paint... Agh, this sucks! He's gonna' say 'Suck me sideways' now." 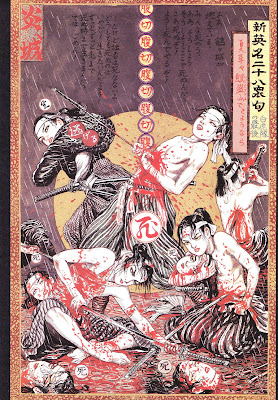 Suehiro MAURO's Bloody Ukiyoe personifies what I'd rather be doing instead of translating my next "legit" project. We should all buy this book. It's amazing.
at 1:14 AM