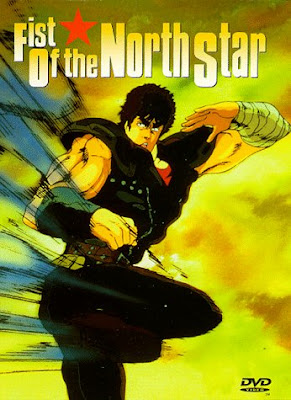 That's right, I finally figured out how to type in Kanji. There'll be no living with me now!

Despite keeping no secret that I am a generally heterosexual male, absolutely nothing in this world gives me a raging man-boner harder than the 1986 Hokuto no Ken Theatrical Movie from Toei. I saw it over a decade ago now, and the film - in itself little more than a glossy and censor/budgetary/schedule limitation free recap of the first 50 odd episodes of one of Toei's biggest hit TV shows of the period (before Dragonball came along and stole the thunder from the 80s as a whole) - still fills me with the wide eyed wonder and burning manly passion that, I've found, only comes with 80s anime in which manly men talk of manly things and beat the manly hell out of each other. There's no cream for that itch, and you'll find that as time goes on, it only gets worse from there. Hokuto no Ken was actually the original weekly anime TV show in which men made each other bleed to establish how manly their existence was, so all the kids today who think Naruto Shippuden 147: Gaara Just Has to Dance! Take his Toes of Fury like a Power Top! is just the height of awesome really have no-one to thank but the tag team of Tetsuo HARA/Buronson, the manga's artist and writer respectively, and Ashida TOYOO, the series director who also rocked my socks with the original Vampire Hunter D OVA a year before Hokuto's first big screen outing.

Up until now, there have been a hand-full of completely unsatisfying DVD releases. Image Entertainment first released the Streamline version of the feature with no Japanese track in 1998, and that snapper-case atrocity remains one of the crowning jewels of my DVD collection. There is a French DVD known as Ken le Survivant: Le Film, and is reportedly a worse pile of crap than even the Image DVD. Likely the most widely known DVD release for the film out there is the MI bootleg, which is effectively the 1987 Toei LD (complete with trailer) with some fancy motion menu, poorly timed English subtitles, and a big ugly "MI" watermark at every chapter stop. Still, if you wanted to watch the flick in Japanese with subtitles, it was your only DVD option out there. A Korean distributor picked up the rights in 2007 and released it with a twist; the original theatrical version of Hokuto no Ken ended Raou actually winning the fight against Kenshirou, not out of disrespect to the show's infalable hero, but because it gave the film version a better sense of closure. With the TV show still getting strong ratings and the video release showing up shortly before Ken and Raou's climactic TV battle, Toei crafted a new tack-on ending in which Ken and Raou fight to draw before Rin shows up, where much the same events follow from there, with some alternate footage (my favorite being a shot from the original ending with Ken literally optically printed in last-minute). Having watched both endings several times now, I respect the guts and narrative ramifications that the original ending carry with it more than my eternal fanboy that shouts "What?! Raou letting Ken survive during their first encounter without Toki there to make him feel guilty? You've got to be kidding me!". The Korean version has Korean and Japanese subtitles, but no additional dubs or extras of any sort. It does have some Korean text pieces trying to fill the audience in on how Hokuto Shinken works (I think?) and a still gallery, but assuming the Korean subtitle translation was better than the Streamline English dub, these are rudimentary gaps that (hopefully) should be filled with the TV series, manga, or better yet those god-awful/totally awesome looking Korean live action movies that Toei had secretly destroyed in the early 90s. You know what I'm talkin' about...


Anyway, the point of this hopeless rambling is the fact that Toei, 7 years after having released the TV show (thrice now, and on their second remaster!), is doing a Japanese DVD release of the original movie this November for roughly $50 USD. The standard edition will feature a newly minted 1.33:1 HD restoration, DTS Japanese, the theatrical trailer, and a photo gallery. The first press is set to include (and I quote) The Original Theatrical Multi-Ending, a booklet, and - most surprisingly - the English dub. But the solicitation makes it sound as if it'll be included as an extra on a second disc, rather than simply as a selectable audio track. Hard to say. The real stumper is wither or not it'll be uncensored or not. See, Hokuto no Ken '86 may be the single most violent 2 hours of animation the world has ever known, but it was always intended for Japanese 10 year olds. You might think an insanely violent Road Warrior meets The Street Fighter (by which I mean Sonny Chiba, not Chun-Li) combo in which the hero tends to literally make his opponents erupt into gooey geysers of blood and chunky organs would be a bizarre conflict of interests, but Japan is a very fun and crazy place.

I am confused about the OAR of the Hokuto no Ken movie to some degree... the 35mm prints found here* prove that the theatrical release prints were, indeed, 1.33:1. While odds are that all theatrical anime of the 1980s were projected at 1.75:1-1.85:1, as most theaters literally aren't equipped to project anything smaller than that, that doesn't necessarily mean it should be shown in widescreen. The Toei LD was matted to 1.58:1, but was literally the 4:3 telecine with some bars slapped over the top and bottom. Shots like this simply don't look very good cropped to 1.58:1, forget the "new fullscreen" 1.78:1 that I was expecting, so I can only assume that Toei knows something I don't, or the restoration team simply used their better judgement. I'd ask for Toyoo's opinion on the matter, but as he was fine with Vampire Hunter D losing everyone's chin and forehead (despite it never having had a Japanese theatrical release!), I'm inclined to believe he simply doesn't know any better.

To be honest, seeing a title in a theatrical setting is better than seeing it at home regardless of aspect ratio, so I can see why some people would want even nasty, clearly over-matted theatrical ratios (see: The Evil Dead). For a home video release to modify that without the project having literally been framed for it, however, there's just no excuse to mess with it. Stuff like King Kong and now The Dark Knight pose interesting aspect ratio quandaries, and as we saw recently with Terra E..., Toei isn't above matting theatrical features. Whatever the case, I'm stoked that Hokuto no Ken will be presented open-matte.

*That Italian Hokuto no Ken collector is helping me out a bunch here. Poor guy doesn't even know it. Check out his site English here. That boy's got all sortsa' neat stuff.

I'll also point and laugh at the mono audio. I know the LD is Stereo, so I'll assume that 80s Japanese prints were simply mono to be compatable with mono theaters? Hollywood was done with mono films by the early 80s, but it's not surprising in the least that Japan was a few years behind, but likely they prepared a stereo remix for home video since the soundtrack was already stereo to begin with. This would also explain that "Original Mono" mix on the OVA FIlms Vampire Hunter D remaster, come to think of it.

Expect a fullish review once it's out, and for a subtitled version to be made available to the public shortly thereafter.