I Don't Want to Live Forever

Come clean, guys. Did anyone here make the mistake of watching HIGHLANDER: THE SOURCE?

It's okay to admit it. It doesn't make you a homosexual, contrary to popular belief. It just shows you either have a boner for B-movies or refuse to give up on the Highlander franchise, in the hopes that somehow, somewhere, one of the sequels will be marginally watchable. Interesting that the least awful contributions after the first film are the TV series and (supposedly) Kawajiri's American scripted spin-off, which I'm still waiting to watch in its' uncut version. Come on, Japan, make with the bilingual R2 already!

In Soviet Russia, Highlander hates you!
I ask because if you saw the version on Sci-Fi Chanel or the Anchor Bay DVD, you're actually missing out on a lot of the (unintentional) fun. Oh don't misunderstand, I wouldn't suggest that anyone willingly watches this awful example of milking a 20 year old franchise for so much more than its' worth, but if you're going to suffer the consequences anyway, there's more than one way to destroy your brain cels. The US DVD/US cable version (identical save for editing some language) run 86 minutes, and features bookends of narration from Anna in a worthless attempt to make the wretched 2001: A Space Odyssey meets Power Rangers crapfest make even the slightest bit of sense. The "Moscow Version", initially released on DVD in Russia and later having filtered out to Germany, Brazil, Poland and Romania, runs 99 minutes NTSC. (There's also a Dutch release, supposedly a "slightly" alternate version of the US Producer's Cut.) and features no narration.

Just imagine, dear readers. Thirteen unlucky minutes. That's 780 seconds, even. 13 extra minutes of horrible, horrible pain and suffering for the viewer to endure. The US release also re-scored portions of the film and went as far as to tweak the CGI. Evidently fan outcry against the train wreck was so ceaselessly vengeful that the film's producer Peter Davis stated the following:

The Russian version is not the final producer's version. Lionsgate will release the finished film in September 2007.

In unrelated news, scientists have at long last confirmed that you can polish a turd. 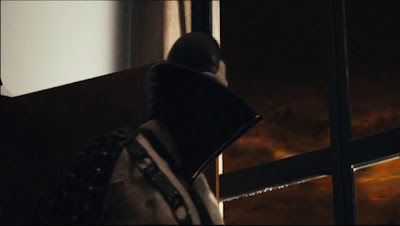 Pyramid Head's lesser known little brother, Pyramid Neck.
Brett Leonard has some level of cult street cred for films like The Lawnmower Man and The Dead Pit. I can't honestly say I'm familiar with any of his work apart from this, but what I can tell you is that this is absolute trash. There are simply no redeeming qualities to be found in this film; not visually, not structurally, not in terms of delivering excitement or even shock value, unless flooring the audience with boundless levels of suck and failure is, in and of itself, entertainment. The sole purpose for which any human being would want to own this is, much like D-WAR, Killing Birds or even Pathfinder, to inflict burning, searing pain upon those who you call friends and loved ones. You feel brutalized and used by the awful film, and you want everyone around you to be just as miserable as you are. I don't think cult film fans are naturally vindictive, evil people, but I think after seeing a film this incredibly awful, something inside you just... snaps. You can't keep this film to yourself. You need others to know you aren't just making shit up. Much like the Lament Configuration made infamous by the Hellraiser movies, they have to see, to know.

And yes, just like Hellraiser's puzzle box, this film will tear your soul apart. 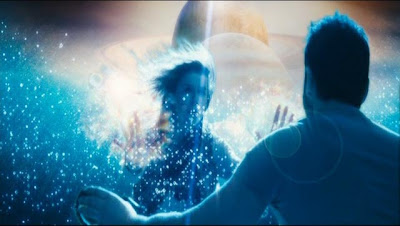 The sound you hear is that of Freddie Mercury rolling over in his grave. Watch the credits to the Moscow Version and you'll understand.
With this friend-torturing potential in mind, a friend of mine asked me (eons ago... I'm such an inglorious bastard) if I wouldn't mind making an NTSC version of the Russian DVD he imported. I told him sure, why not? The Russian DVD is no technical marvel and has plenty of blatant artifacting, but it is anamorphic, isn't cropped (unintentionally), has optional subtitles, and an English 5.1 track, so it's one of the nicer Russian DVDs out there even with the transfer looking like it was made with TMPGEnc Plus set to one-pass Constant Quality mode. Blech.

Anyway, I do have a technical angle to get at here. I had to pitch the audio from 25fps to 23.97fps, since PAL transfers typically play film at 25fps and pitch the audio 4% to go along with it. The difference winds up being about 2/3 a semitone, and while some people flip out the moment they hear pitched PAL audio, I'm not really one of them. I've always been a more visual oriented person anyhow, and oft small sound effect bugs or subtle remixing of music I'm somewhat familiar with don't jump out and slap me unless I'm really into the audio to begin with (or I've simply heard it 100 times). In effect, PAL speedup doesn't bother me because I don't listen for it, and if I've never seen a film before how the hell am I supposed to know what it sounds like in the first place? 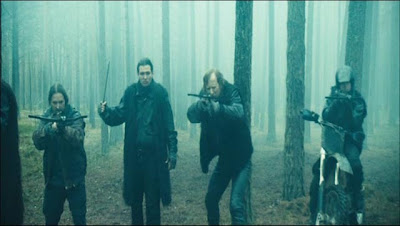 Crazy eurotrash cannibals. They must be German.
Making things even more confusing is the fact that in recent years, PAL transfers have still been speeding up the audio, but they've also been pitching the audio down by that 2/3 semitone after it's been stretced to match the sped-up video. OVA Films' Vampire Hunter D is one such example, and it's very easy to tell when YOUR SONG plays over the end credits. Now, I don't honestly know if Russia's down with pitching. On the one hand they're probably given pre-made materials by the film's original owners (in this case Lion's Gate), and they may be down with pitched audio. On the other hand, Russian dubs are typically three guys reading the subtitles out loud over the original audio track - I swear to God, I'm not making this up - so clearly the standards for proper audio fidelity aren't very high up on the concerns of Russian DVD production. Not having an NTSC version to compare to, I'm left to my own rather tin ear to try and judge wither or not the stretched out NTSC audio is "right" or not.

Thankfully, the guy I'm doing the transfer admits he's no video/audio nut, so even if I make the wrong choice I don't think he'll be too upset. Still, it is a conundrum I'm likely to duel with in the future, and I wish I could figure out some simple way to make the call. I don't even own any new enough LG DVDs to have their "clockwork" opening, which would be a relatively easy way to compare the pitch now that I think of it. Blame a combination of my limited budget and my refusal to buy something I expect to see on Blu-ray less than a year after it hits DVD. 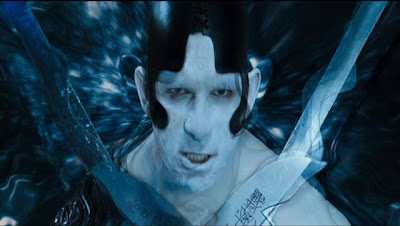 The worst part is that's his "O" face.

Errata: Freddie Mercury was cremated, not buried. In solance, I'm more than willing to get cockslapped by his ghost, if he ever so chooses. How could I turn it down from the guy who gave us Fat Bottomed Girls?
at 3:28 PM

My friend invited me to his place after work one day and we had lunch he made. Then, he said we were to enjoy our lunch to this new "surprise" he downloaded......which turned out to be the 99min version of the Source and which was among the most PAINFUL pieces of dreck i've ever encountered.

(My friend knew this was garbage and intentionally trapped me with free food so we could watch it together.....just stating that, lest you get the idea that any of us thought it was good in any respect)