太陽の傷 - Stare at the Sun until your Eyes Bleed 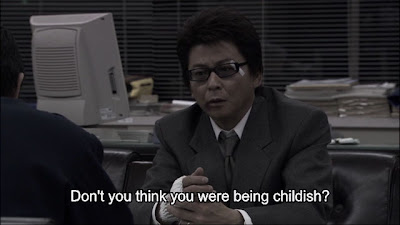 Show AIKAWA (Zebraman, Dead Or Alive trilogy) gets in a street fight with a gang of delinquents, and when he wins one of them decides to get more than even. Having lost everything he goes into seclusion, until he hears that the kid who took his life away has been released from Juvie. He goes back on the pretense that he wants to see with his own eyes that the wild child has changed and become a peaceful citizen, but neither Aikawa nor the heat-packing teenagers of Japan can let this old score be settled peacefully...

Just incase y'all didn't know, Takashi MIIKE is my God. After 30-plus films he's never left me unamused, and while not every film is an internationally celebrated revolution the fact that he's roughly as prolific as Jesus Franco or Joe D'amato while at least as talented as any dozen period grindhouse director glued together is a combination I just can't get enough of. This is much more in line with Koushounin/The Negotiator, or maybe even Kikoku/Yakuza Demon in being a smart, deeply sad drama with only moments of his trademark over the top insanity, but just like those two films the characters are strong enough that it still holds together nicely

It's no Sukiyaki Western or Audition, but it's probably Miike's most mature and sincere film since The Bird People In China, and manages to pack an even harder punch overall. Comparions to 70s grindhouse revenge movies aren't completely without merit, but go in with a clear head and just let the film's cold message wash over you, like so much bitter tears and dried blood.

You know you want it. You know where to get it. Here's the best part... it's Golden. So hop to it! 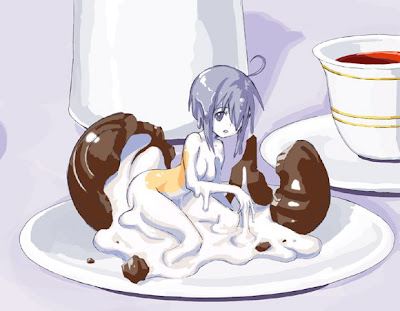 My wife wants to try the caramel filled kind.
at 10:49 PM

Wait.....where can I grab this? I guess i'm out of the loop since I just started reading the blog.

Btw, thank you for this!

Ah! I am actually a member there, but i've been inactive for awhile...

Awesome sauce all around.