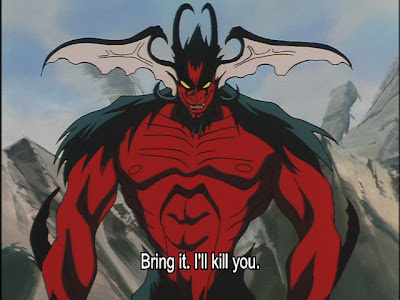 That's right friends, my own translation was put up as a patch on ADC. It's infinitely better than the Chinglish bootleg subtitles you'll find on YouTube or whatever. Can't say for sure if the Cannibal King VHS from 2000 was any better because I've never seen it, but as most CK DVDs need some serious grammar policing I'm willing to bet my release is the best it's ever known, and will ever get.

Sad, isn't it? I mean, I can buy the Xenosaga anime on DVD in the United States, but not Amon: Apocalypse of Devilman. What the hell, Manga Entertainment?

If you don't know, Amon is likely the single greatest OVA of all time. Better than Megazone 23 Part II. Better than Angel Cop. Better than Kakugo no Susume: Apocalypse Zero. Better than Vampire Hunter D. Better than Riki-Oh. Better than Violence Jack. Better than Genocyber, even. Oh, if you're thinking "but all those shows are crap"... get out. Ah! Don't wanna' hear it, you know where the door is. Don't let it hit you on the way out.

This show has that same sense of PCP fueled non-storytelling and out of control bloody horror madness and cranks it so far over the top that you'll either sit horrified or cackling the whole time. It's just indescribably amazing, and the world is a much better place for the fact that it exists. It won't make a lot of sense if you aren't already familiar with the Devilman mythos, and yes, it's at times overly obtuse and... "Post Evangelion", if you follow me, but it remains one of the most beautiful and ugly 45 minutes of my life I've ever wasted.

If you've never seen it, and don't mind wretch inducing animated gore, kick yourself in the teeth for having forsook it until now and download it ASAP. You'll thank me later. You'll have to download the R2 from some other guy and then use the patch to add the subtitles, but it's nice and easy to do after that. Also, the patch is teeny-tiny. And the disc is a dual-layer affair, so if you aren't down with that, buy a DL burner already. Or maybe invest in a second hard drive. With the way I'm downloading crap these days I really should.

In other news, I'm hard at work subtitling another horrific and gristly Go Nagai show. Won't tell you what 'till it's up, though. You'll be pleased, I'm certain.
at 4:41 AM