I'm in an awkward spot. On the one hand I'm almost not buying DVDs because I Know Damn Near Everything I Could Ever Want Will Be On Blu-ray Sooner Or Later Anyway.

...I could go on, but surely you get the point.

This has put me in quite a bind. On the one hand I'm not particularly interested in buying much in Standard Definition because I know the horrible little prick in me who demands that everything be perfect will balk at the very thought, should there be a High Definition transfer less than a year down the pike in the cards. On the other hand, lacking an HDTV* or any sort of Blu-ray player means that picking the BD release up because I can't actually play it. If there's a hell of a deal I may snap up a BD and keep it on my shelf for that inevitable day when mediocre Dragonball Z and Mortal Kombat games are no longer produced for the PS2, and to get my semi-annual fill of sweaty men beating the crap out of one another I'll literally have to upgrade my gaming system, at which point I'll continue to forsake Microsoft's evil little game box and get a nice BD player that happens to be built into the huge chassis of a purported gaming device. That way everybody wins.

A few months ago the British Film Institute said they were releasing Pierre Paolo Pasolini's controversial 1975 adaptation of the Marquis de Sade's 120 DAYS OF SODOM, released as SALO, uncut on Blu-ray in the United Kingdom. Not only did it promise a restoration of the original negative and a host of special features not on the Criterion Collection Reissue, but - being a High Definition release - it promised a better AV presentation as well. Plus, the cover is hot as hell. (And yes, I'm going there when I die.) Most tempting is that even WITH the fees associated with importing a UK Blu-ray, it would run me no more money than the typically overpriced Criterion release would, which meant that skipping the R1 would be a no brainer.

Unfortunately two things happened recently over at DVD Beaver - no linkie for you this time - and neither of them were very appealing. First off, the two disc set (featuring a Blu-ray for the feature and a PAL DVD for the extras) will be Region B and 2, respectively. While I've never been without a region free DVD player, region free BD players are still very limited and overpriced in their selection, so while I said I'd never buy a non-region free player, the overwhelming majority of releases have either been Region A or only or Region Free, to the point where I believe Salo is the first strictly Region B BD on the market (though I'm probably mistaken). In short, the bastards lulled me into a false sense of security and the first time a truly spectacular BD import wags its' ass in my direction I'm immediately cockblocked by the region code that also made DVD far more a pain in the ass than it should have. Seriously, would letting a few dozen (tops) Americans who happen to love nihilistic character dramas caked in feces and fake penises watch the British HD release really be the end of the world? I can hope that the region lockout means that Criterion is busy prepping its' own, superior HD release, but as Criterion DVDs typically cost $40 to $50 for a 1-2 disc set I'm assuming a truly tricked out Blu-ray release will be so costly that it'll require me to sign a contract held by a man in a red cape and when I stop making those easy monthly payments he'll come to collect one of my kidneys.

The fact that I'm "not allowed" to view this disc isn't quite the tragedy I'm making it out to be though... since frankly the "High Definition" transfer sucks hairy dog balls. 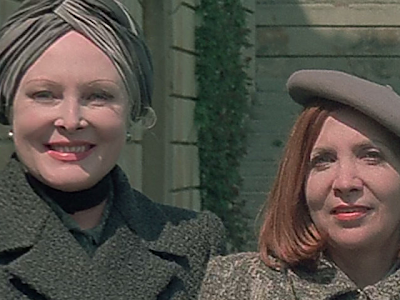 This is supposed to be the face of a woman. As you can see, it lacks any sharp detail, with no pores or fine lines or anything of the sort to be had. Also notice that there's no grain - zero - something that doesn't make much sense for a movie shot on 35mm... even the finest grades of film have visible grain. It's how films are made, with every irregular granule of the emulsion capturing a specific color at a specific point in time based upon how much light it was exposed to. Much to the chagrin of videophiles everywhere, for the last 30 or so years studios have spent a lot of time and money trying to filter out grain and the analog equivalent - noise - to produce a more stable image to be seen on low-definition TV setups. The day of SD transfers being the norm is slowly sinking behind us, and the thought of grain being a bad thing - somehow a 'flaw' in the transfer - has to go with it. Removing grain removes detail, and no, you simply cannot have it both ways.

You can also see an odd white outline everywhere, the indication of post-tampering with edge enhancement, an old analog standby to trick the human brain into perceiving high-contrast artifacts as sharpness. That's right, not only was this transfer stripped of all its' actual detail via Noise Reduction (to make it less grainy), but an artificial sharpness was slapped on top of that. Retardation meets redundancy, film at 11.

"But Kentai" I can hear the back of your mind shouting, "It's an old and low budget film. How good can a cheaply made movie older than you look?"

Glad you asked. Take a peek at a shot from The Godfather, another "old" and "cheap" movie from the mid 70s. 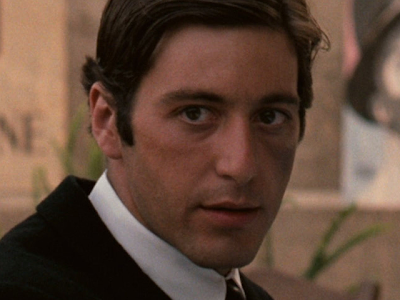 Not good enough? How about a peek at The Texas Chainsaw Massacre, the definition of "old" and "cheap". 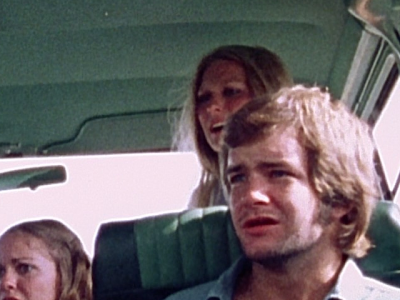 TCM doesn't look that great, having been shot on 16mm reversal stock with zero controlled lighting, yet it still looks more like film than Salo, which was shot on 35mm. That's not just surprising, that's pathetic.

All in all, we yanks are better off getting this shoddy released locked out of our hair. In the meantime I'll just buy the Criterion R1 DVD - which seems to have grain, even at 480p - and be done with the film until we get a proper US Blu-ray release that looks substantially better.

Note: I'd have called this blog "Blu Holocaust", but instantly knew I'd want to save that for either complaining about the German bootleg of Buio Omega or wait for Cannibal Holocaust to get a BD release somewhere. We'll figure out which one I go with in due time.
at 2:00 AM