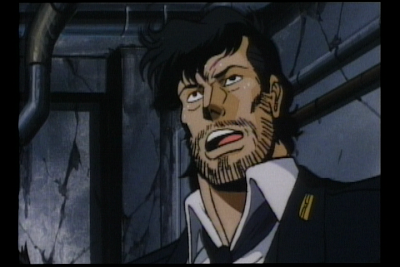 Remastered Frame
Funny. The subtitled version for the entire VIOLENCE JACK trilogy is already over and done with, so for reasons beyond my comprehension that evil little voice in the back of my head starts shouting "Remaster it, you bastard! You know you can make it better!" 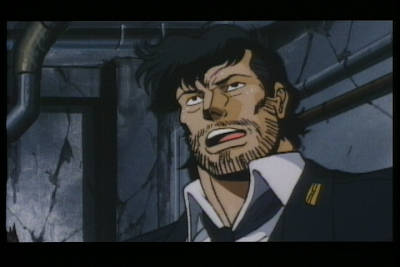 Original DVD Frame
The short of it is EVIL TOWN is a mess, yet another OVA that was shot and primarily edited on film, but has just enough video editing that breaking every interlaced frame back into its' progressive film equivalent via 3:2 inverse pulldown (IVTC) is physically impossible. At best, you wind up with jagged semi-interlaced frames like the one above. At worst, you have to deinterlace every frame with any interlacing artifacts that show through, which just makes everything even worse. What's especially noteworthy is that ANGEL COP has the same nervous tic, with many seemingly standard scene edits being slightly extended or cut short via video editing on the master tape. I can thus only assume that this is something ITANO Ichirou in particular has a fetish with, needing total, almost Godlike Power over the lengths of his cuts that didn't quite match what he'd hoped for. I applaud his dedication to detail, butit doesn't make what I do the least bit easier.

On the upside, the overwhelming majority of frames (even during the pixelated rape scenes) IVTC just fine. The upscale - as you can see - is going well enough, and I even managed to fix those poor black levels while I was at it. I'll have to include the credits as a second encode and splice it into the "progressive" main feature later, but that's what I've done with all of the Pinky Violence/Roman Porno restorations and so far no-one has either cared, or seemingly even noticed. While there is a bit of video noise, mostly mosquito noise from the original MPEG encode, it isn't so horrific that I'm tempting fate by adding noise reduction.

I tore Anchor Bay a new one for similarly poor-IVTC/upscale crap on TENEBRAE. That may sesm harsh, as that's literally what I'm doing now, but understand that Anchor Bay is a legitimate US distributor and has access to 35mm prints. They have both the resources and the technology to make a beautiful new unedited 1080p24 transfer for both DVD and Blu-ray. Instead, they choose to take the cheap route and do what any clever guy with a little AVISynth knowledge could have done with their original releases, but they even managed to fuck up Phenomena more than their first DVD release with heavy temporal noise reduction that caused ghosting. Way to go, guys...

Anyway, will this restoration be on the "Sale" version of Evil Town? Damned if I know for sure. I just know that it's fun figuring out how this series was put together on a technical level, and the more fucking around with video I do the more I learn about what (not?) to do with it in the future.

Well, I've had my fun. Back to ripping out hardsubs from a poorly fansubbed ero OVA for imminent patching. 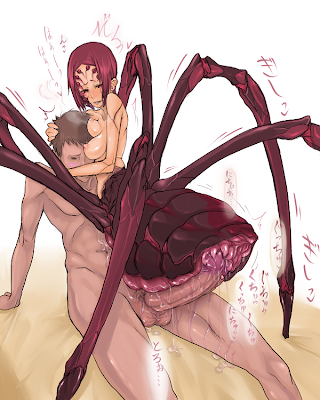 I will never, ever listen to a hide song again without this image popping into the back of my head. I'm honestly not sure if I'm horrified or eternally grateful.
at 7:25 PM