VIOLENCE JACK: EVIL TOWN (and HELLS WIND, I think, though I've yet to compare all the releases out there) has some of the strangest framing issues going on that I've ever seen. Originally produced in 1988, it was a sequel/spinoff/whatever to the 1986 OVA release which, at the time, was just known as "Violence Jack", the episode which was eventually ghettoized even further by Manga Entertainment and released last, so as not to scare them off with the primitive animation and distinct lack of... well, the titular violence. 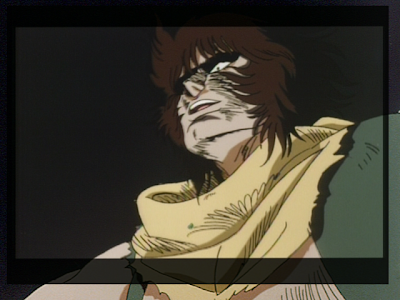 What we see here is the Japanese DVD transfer, itself a comb-filtered port of the composite video master used for the 1988 JHV release, superimposed onto a still found on the same disc as an extra. As you can see it's been cropped on all sides into a completely different aspect ratio. The actual R2 aspect ratio looks to be about 1.66:1, a familiar ratio to connoisseurs of European films*, but a ratio that's probably never actually been seen in a Japanese theater which patterned itself after Hollywood directly and switched to "Anamorphic" (2.39:1) and "Flat" (1.85:1) - both wider than 1.66 - by at least the late 1970s. The earliest anime I can think of to be animated in 1.85:1 is Miyazaki's LUPIN III: THE CASTLE OF CAGLIOSTRO, but I wouldn't be surprised if there were more out there.

My gut instinct tell me that this production still is actually the original camera negative, or a print direct from it. No, I can't be sure... but if it's a scan of a production cell, why the hell is there grain all over it? Cells don't have grain - though, frustratingly, a photo of one would. Wither or not the actual camera negative is 4:3 isn't certain, but the show was certainly animated that way. 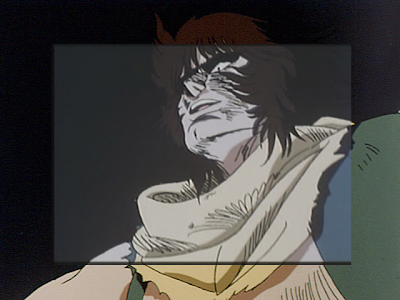 Now take a look at this little number. What we have here is the Hong Kong VCD from Universe Laser, a rarely seen alternate cut that turns HELLS WIND and EVIL TOWN into a single movie. It also edits some of the more graphic violence and dialog, overall making the two of them into a faster paced action title with the majority of the gristly nastiness that made the latter two episodes such exploition darlings. Anyway, the print is cropped on the top and bottom more or less the same as the Japanese DVD... except it's also been pan-and-scanned, leaving so little of the original film frame left that it's practically a bad joke! However, there's a little more info on the bottom of the frame, proving that the R2 isn't hard-matted either, lest we'd get that pointy scrap on Jack's arm-hole in frame like we do on the Cantonese dubbed VCD.

Telecine by nature removes the outermost edges of the frame, but the VCD transfer is just insane. As you can see Universe could have very easily created a competently framed 4:3 transfer, but instead they either started with a prematted "widescreen" print and then cropped it for fullscreen later on, or... well, I'd rather not consider the second possibility.

The aspect ratio, however, isn't the exciting thing about the VCD...

Note the film splice in the middle of the frame.

Yes, she gonna' get raped.

Wait, this DIDN'T get cut?!

The Hong Kong VCD is especially awesome for including several shots which, on all other known video releases, are censored to remain within Japan's obscenity laws about frontal nudity. (The first screencap is one of several instances of the NEVA just spacing the occasional vagina and not bothering to change its' mind in retrospect.) As if to spite me, not all of these censored shots are included though. It also deleted other random acts of violence, including that Evil Dyke Rapist chick killing children, and those same kids yanking the legs and head off of a cockroach so they can eat the eggs inside. I can't decide why the latter was cut... is animated cruelty to animals - animals that most people step on or spray with poison - really something the TELA should be concerned with?

In total, at least shots that I could identify were uncensored on the Hong Kong VCD. Ironically, at least 9 shots are also either missing entirely or cut to obscure the footage that would have been uncensored. Here's many (but not all) of the examples I spotted: 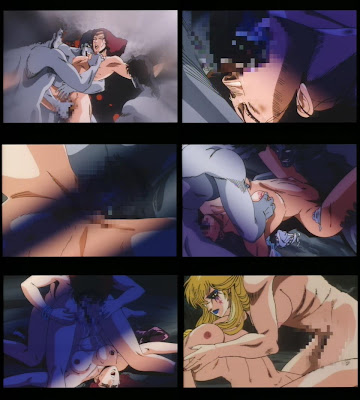 While I wouldn't quite call Evil Town the pinnacle of Violence Entertainment, I think it one-ups most films who's sole purpose is to genuinely offend the viewer by crafting a larger than life fable about the evils of men who, when faced with a crisis, degenerate into literal animals. Its difficult to genuinely like a film who's sole likable cast member is an inhuman giant who couldn't really care less about the fate of those around him, but that's really the point, made clearer here than it was even in the early Go Nagai volumes of the original manga: Violence Jack isn't a man, or a monster. He's a force summoned by the world around him, natre's emergency break who can only be pulled when everything around them fails.

Aira: "Can't you stop the killing?"

Up until the final reel when Mad Saurus approaches his fallen comrades, the whole story plays out as a brutal - but somewhat conventional - tale of post apocalyptic panic and hysteria. After that... I don't even know how to describe the whole thing. Itano's occasional lapses' in animation quality through the film (at least when compared to MEGAZONE 23: PART II and ANGEL COP) are forgiven by the absolute gonzo art efforts of the climax, which mixes experimental glowing line-art and splatter-movie imagery, building to an incredibly gruesome climax - and then ending with a whimper via some tacked-on Revelation of the world not being quite so bad in the end, though wither this ending is really the fault of Itano or the always reliable screenwriter Aikawa Shou, without whom I'm sure much of the sneering dialog would have gone from scathing to ludicrous. Much as Evil Town is almost the perfect exploitation film, paced to keep the surprisingly personal story chugging along and filled with enough gut-churning violence and quite literally pornographic rape, the follow-up episode HELLS WIND took the story and pushed it further into the realm of epic nihilism, creating a slightly less graphic but no less awe-inspiring action film to Itano's soul crushing celebration of humanity's inherent loss and bestial tendencies.

Evil Town is a calculated and traumatizing event, not entertainment, and Itano used his position as director to use pornography - usually a safe fantasy that the audience uses to escape - and assaults them with it in the most unpleasant manner possible. Particularly to a Japanese audience, who considers films like Audition and Freezer not "Horrifying" but "Feminist", I imagine the sight of the Zone B men getting their eyes torn out and literally wrenched in two like a wishbone leaves a hell of a lasting impression. With this context in mind I can't write Evil Town off as the utmost sadistic wank material. Only the most jaded and heinous of wankers are likely to find anything sexy about it, and for it, Itano should be praised.

That not to say it's likely not the single hottest rape scene in animation if you're already so jaded that nothing in Mezzo Forte or La Blue Girl looks like rape to you anymore. I'll leave that descision up to you.

HELLS WIND is its' own fun, and some would argue even more satisfying experience, but it and its' director Takuya WADA's take on the material and seemingly has far more love for Mad Max 2 and Rambo than it does Caligula and Emanuelle in America. Evil Town is a peerless and heavy exercise in bad taste, a once in a generation product of its' time when producers would let directors make whatever the hell they wanted so long as it was a certain length and delivered what the box art promised. The result was an endless parade of sadism, claustrophobia, naughty bits, and garish primary colored special effects designed to assault the viewer's every sense of taste and morality without dressing it up as fine art. The final product has all the subtlety of a music video combined with a gore movie, designed solely to leave the audience reeling and suffering. It's the animated form of noise music, of mutilation as a form of self expression... and I couldn't be more thrilled with the results.

*It was created as a second standard after WWII, so that Hollywood could sell both vintage "Academy" (1.33:1) and modern "scope" (2.39) films. Many European countries adopted 1.66:1 as a native ratio - such as Poland and the Netherlands - and was also adapted by Disney in the early 1980s specifically so their films could be cropped theatrically to 1.85:1 and then into 1.33:1 for home video without looking particularly compromised in either format. It's also the native aspect ratio of Super16, the gritty documentary-grade film stock that gives movies like The Devil's Rejects and Babel their unmistakable look, though as virtually all modern theaters are not properly equipped to play 1.66:1 the film is matted to 1.85:1 eventually.
at 7:30 PM