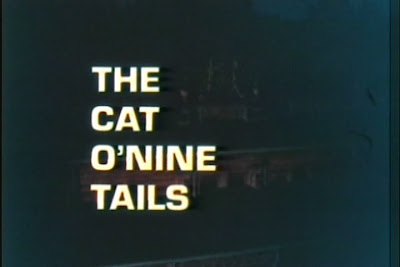 ...what's all this, then?
If you're a cheap Netflix exploiting bastard (like me) who likes the films of Dario Argento (guilty), skip THE CAT O' NINE TAILS. I was less than impressed with the VCI release of The Bird With Crystal Plumage, but at least it was uncut and letterboxed, even if it was still a non-anamorphic LD port.

The disc envelope claims that it runs 112 minutes, just like the uncut "Integral" version released by Anchor Bay, and later Blue Underground. It even shows the Anchor Bay cover art. But what I got was a shoddy looking disc from a one WESTLAKE ENTERTAINMENT, running a scant 89 minutes. In short, it's an LD port of a pan-scan 16mm print of the MPAA approved general release version distributed in the US nearly 40 years ago.

As it's the most wonderful time of the year, the one in which children are encouraged to decapitate one another and then feast on sugary candies, I figured finishing off the Animal Trilogy would be a fine way to spend an evening - especially after slogging through Bruno Mattei's HELL OF THE LIVING DEAD the other night. ("Hell" indeed... I can't decide if it beat Zombi Holocaust for Worst Spaghetti Zombie Epic or not!) With a DVD this awful I'd rather just wait and buy the goddamn thing for under $15 and save myself the headache of trying to make out what's going on with half the frame missing, and buried in compression artifacts besides. I'm not sure if I'll fall in love with it, but neither 4 Flies on Gray Velvet nor The Bird with Crystal Plumage were bad, and supposedly this is the film that gave Dario the "Hitchcock of Italy" nickname, so I'd be lying if I said I wasn't all too curious.

Besides... it's either this or THE CARD PLAYER.

Guess I'll send this back and exchange it for DEEP RED, and I'll be all caught up from Trauma back, save for this and Two Evil Eyes. Blarg.
at 9:50 PM