Enma Daiou - How Japanese is Too Japanese?

Recently my partner in crime spent a lot of time transcribing the English Darker Image VHS subtitles from the 1987 OVA DEVILMAN: THE BIRTH into a text file, and then when the opportunity arrived, pasted them into the corresponding dialog in an incomprehensible Chinglish subtitled bootleg. My job is to watch the subtitles while the video/audio play and fix anything that needs fixing. It SHOULD have been rather straight forward, but of course, the Hong Kong bootleg cut an 18 second scene of Akira and Ryou breaking the window and escaping from the Seat Demon for no reason at all, and sometimes those crazy Chinglish subs just wouldn't match up worth a damn and thus required lots of hand-tuning. For Go Nagai's masterpiece, I'm willing.

What really knocked me for a loop was an oddly specific line that Akira says, right before the two of these star crossed lovers-- oh, sorry, best of manly friends, go to the Sabbath to give birth to Devilman:

Back when Darker Image translated Devilman in the early 90s, they used the following subtitle:

Ryo, you are my road to hell!
Let's go, Ryo! Open the gates of hell!

Now, there's two reasons why this dialog is important. The first, and more obvious reason is that the name Enma Daiou (閻魔大王) is the Shinto form of the Indian diety Yama, first written of in the Vedas and... well screw it, just wiki his ass. The kanji literally mean "Great King of the Demon Gate", and his presence in Japanese literature is typically one of indifference and mechanical disinterest, not so much unlike Hades in Greek mythology. He's appeared in various anime, including Dragonball and Yuu Yuu Hakushou, but the joke is very specific to the Enma-kun franchise that Go Nagai created in the mid 1970s. Dororon Enma-kun was a gag manga about the son of Great King Enma, in which he, his kappa sidekick and his psuedo-girlfriend Yukihime (Snow Princess) would travel the Earth, dragging wayward souls back to hell where they belong. Lots of panties, young peenies, and difficult to translate wordplay were involved. Go eventually grew bored of drawing Enma as a child, and created both Dororon Enma-chan, in which the now adult Enma cast gets a gender swap, and Kikoushi Enma, which was his first serious interpretation of the character (also as an adult). The latter got a surprisingly excellent serious horror OVA series, even, which in typical Go Nagai form had absolutely nothing to do with the manga of the same name. It was released by Bandai Visual USA, but since they insisted on charging $40 for 2 hour-long and un-dubbed, episodes, nobody actually bought it.

So, Akira calling Ryou "Enma" is a snide reference to Go's "other" works. Cute, right?

That's only half the joke. The other half is that, using Hindu/Shinto iconography, Enma Daiou is the King of Hell... roughly the Eastern equivalent to the concept of "Satan". Now, if you've never seen Devilman, go watch it and come back, 'cause I'm about to ruin it forever... 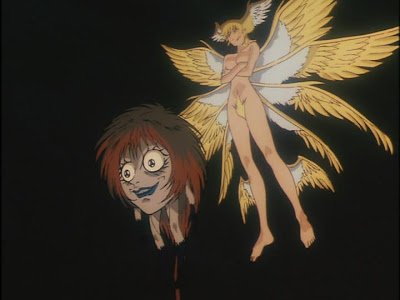 Classic trap.
Neither of them know it, this early in the game, and the original OVA series* never got far enough in to reveal this particualr revelation, so they didn't bother trying to keep the subtext of this line intact. As far as they knew, Akira was just trying to make a bad joke. I can't fault them - it's not like they were handed the complete works of Go Nagai and instructed to read them before translating Devilman - but that doesn't mean I can't fix it up for them in retrospect, now does it?


Ryo, you're my Lord Enma guiding me straight to Hell!
Let's go, Enma! Open the gates of hell!

Short of a full blown page of notes that would be nothing but OMGSPOILERS, there's just no way to translate this "properly" into English, solely because nobody speaking English would have a clue who Enma Daiou is, forget Enma-kun. Simply put, if there's a "fair" and "easy" way to translate this into English while keeping both the in-joke and the subtext, I can't for the life of me find it.

So, what's the very next line? Surely that won't need fixing up to keep from being awkward in this now literal Japanese context... 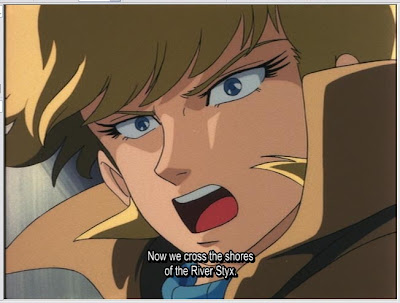 *The Birth and Sirene: Demon Bird are a singular cycle. Apocalypse of Devilman, for various reasons, is basically a stand alone experience and even goes as far as to reboot Devilman's origin with more sadistic and modern animation. That's not to say we can't assume that the first 2 OVA's happened before the Amon OVA... they did. But, not in the same way. Aren't reboots, um... fun?

Don't get me STARTED on Shin Cutie Honey. and if/where it's supposed to go in the "official" timeline. Go Nagai doesn't even care, so why do we? Far as he's concerned EVERYTHING takes place in the same universe, and he seemingly wrote the CB CHARA OVA's just to prove it. Incidentally, this insanity is exactly why I love him.
at 5:15 PM