A History of Violent Artifacts 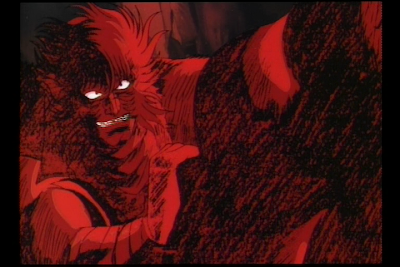 See Jack's teeth? That's called "combing", an all too comon artifact from when an IVTC (inverse telecine) fails to reconstruct one progressive film frame from two separate video fields (half-frames), and effective pastes two different, unrelated fields together, creating a frame that's nowhere near what the original film frame is supposed to look like. Auto-IVTC altorithms have a lot of trouble picking out the good fields from low framerate animation, which is why the majority of anime DVDs not taken from brand new progressive HD masters are totally - or even partially - interlaced, while the majority of live action films are progressive even if taken from SD transfers. (Not that there aren't interlaced live action material from film. God, I'd like to smack everyone responsible...)

I said right from the start that if I had to manually IVTC EVIL TOWN, I wouldn't do it, because there's so much goddamn-motherfucking-cockshaving video editing that it's literally impossible to make a progressive frame out of many scene edits that Itano did last minute (like that shot of Kawamori I put up a week or two ago). 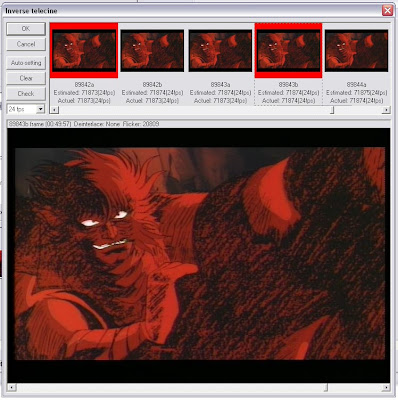 Here's proof that the above frame(s) COULD be made progressive, if I wanted to do a full blown manual IVTC. Trouble is there's so many "video" frames left over that I'd either have to manually deinterlace them, or try to delete them entirely, which could wreak havoc on the audio synch even if I could get something that crazy to work. And, no, I couldn't.

To create anamorphic Evil Town, I'd literally have to deinterlace every frame, which means turning this... 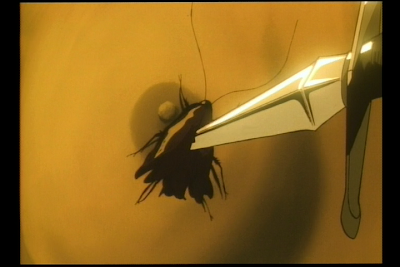 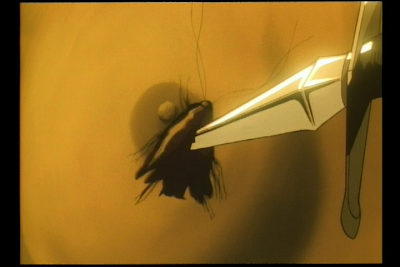 This is incredibly discouraging, as ANGEL COP was put together more or less the same way as EVIL TOWN. In effect, any upscaling I'd do would cause just as many problems as they fix, so I think I'm done trying to polish this turd. I could still color correct it, remove some of the more obvious noise, and finally use CCE SP's auto-IVTC function to create a mostly (or even just partially) progressive transfer that would default to interlaced when the pattern gets screwed (and, of course, when it randomly feels like it...), but I'm completely fucking done trying to use any automated IVTC process. Certainly some professionals I've talked with in the past could ready a "told you so" on this one, but I'm one to hold out hope to the last, until the cold, harsh reality is so close to my face that all I can smell is it's rank breath.