Sex, Gore, and Comfort in the Familiar: Musings of a Genre Fan Part 1 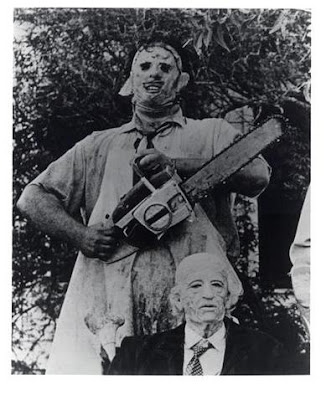 You go right ahead and tell him that he's got gender ambiguity. Tell me how that goes.
While "Well Read" is nowhere near the top on the list of words I'd use to describe myself - things like 'Persnickety', 'Anally Obsessive', 'Boorish', and 'Chronic Masturbator' spring to mind long before I get that far down - I have been having just a bit of fun lately at my local college library, which happens to have a small section dedicated to books who's sole purpose is to analyze film. The first of those books that caught my eye was called Men, Women, and Chainsaws: Gender in the Modern Horror Film. Unfortunately, it's clear that miss Carol J. Clover and I have vastly differing thoughts on not only what horror films may - or may not - be trying to tell modern culture about its' subconscious.

While I won't say her book is without some interesting viewpoints - what I bothered to read concerning I Spit On Your Grave wasn't so far off from how I view the film, for example, and I wouldn't have stopped to think that Deliverance is a fair, if less gender specified counterpoint to it - I will say that I flat out disagree with her opinions directly targeted at the original The Texas Chainsaw Massacre, arguably the very template that slasher films (the most morally fascinating horror films out there... even if most of them suck) would follow for the next several decades, and - alongside other genre mainstays like The Last House on the Left and Night of the Living Dead - established that unknown middle Americans with little movie making experience and zero Hollywood backing were still capable of scaring and disturbing the living shit out of the general movie going populace. TCM remains one of the most effective horror films ever shot, and may be the sole genuine grindhouse article, the one period horror film that's neither heavy handed nor completely irrelevant all these years later. It's also the only film besides Cronenberg's Crash and the second episode of Countdown that ever sent my wife staggering out of the living room, feeling physically ill. As TCM has no gore to speak of, that's pretty damned impressive.

According to Clover, the film bucks the trend of post-Psycho horror films by having a generally sexless set of villains; typically the killer in a horror film is in some way sexually repressed or confused. Norman Bates started the trend by dressing in drag and killing the first woman he found himself sexually attracted to. Buffalo Bill continued the trend by skinning women to make a "woman suit" out of their flesh. Leatherface, along with these two prior cinematic serial killers, are all based (loosely) on Ed Gein, an incestuous necrophiliac cannibal with a mother infatuation and the desire to literally become her. Leatherface, according to Clover, is a "sexless" and "childish" figure, "covered in baby fat", with no overt signs of sexual or gender orientation to speak of - at least in the first film (part 2 she almost gets right, but more on that later). Leatherface is literally an inhuman monster, according to Clover, uncomplicated and simply at the mercy of his borderline "normal" father figure.

On almost every word of that I call bullshit.

It's true that Leatherface doesn't have an inherent gender identity, no, because he lacks the sense of "self" normally associated with sane minded individuals. Through the course of the film Leatherface wears a total of three masks (with matching outfits):

* A male mask, with a butcher's apron, in which he makes squealing pig noises.

* An "old" mask with a curly gray wig and kitchen apron, in which he makes nonsensical chattering that sounds similar to the average "female" voice (by which I mean Eric Idle playing an old biddy in a Monty Python sketch).

* A "pretty" mask, covered in make-up, with a dinner jacket, in which he howls excitedly and growls when upset.

The first mask lacks any direct masculine or feminine features, so in describing it as "masculine" I mean nothing more than it doesn't have a feminine bent like the other two do. More appropriately might be to describe the mask as "bestial" based on Leatherface's personality while wearing it; the only noises he makes while wearing it are pig squeals, and we never get to see him interacting with anyone to even see wither or not he's capable of communicating in a somewhat human manner while he wears it. He does panic at one point, putting his hands over his temples and licking his lips, but we must remember that Leatherface gives off the appearance of an autistic individual, and thus his actions - animalistic or not - are only dictated by the full breadth of his mental capacity, which isn't that vast to start with. This regression has little to do with his mask because it's genuine. Leatherface is scared, and lacking anyone to communicate with, he essentially balls himself up and flips out until it's time to do something more constructive.

The third mask - proven most vividly in a deleted scene, released on every "special edition" version of the film from the Elite LD onward - is actually chosen by Leatherface by hand from a rack, and then carefully powdered. From the body language and lack of "real" English language communication skills we can assume that Leatherface is, at the very least, mentally and emotionally stunted, so it's difficult to guess what he equates 'makeup' with. For Leatherface it could be a feminine commodity, or as the performer has suggested, simply one of looking nice for dinner. Leatherface doesn't directly show any masculine or feminine traits while wearing this mask, either; he again shows the excitement of a child, playing along with his brother, and dutifully carries out the tasks his father gives him. So far, what I've said doesn't directly contradict Cover's implications that Leatherface is literally trapped in his adolescence, and thus doesn't have a specific gender identity because it doesn't occur to him that he needs one.

The second mask, however, is a drastic change. Adorned with an "old" wig and a flowered apron, Leatherface's bestial howls and masculine grunts are replaced with a chattering series of high pitched chirps, not actual words, merely sounds of positive or negative inflection which - when combined with simple pantomime - are more than enough for both his father and the audience to follow. The mask he wears is one he directly associates with cooking and housework. Leatherface's "voice" is high and feminine. He's wearing a woman's apron. In this comparatively brief sequence between Sally being brought back to the farm house and the dinner sequence, Leatherface is unquestionably a transvestite, both in mannerisms and dress, and from that point on any argument that he lacks any specific gender traits starts to make sense.

Leatherface only shows the traits of the mask he's wearing at the time. If it so happens that the "beast" and "dinner" masks have no gender traits, neither will Leatherface. His sexual identity crisis is the fact that he doesn't have one to begin with, unless the dormant personality of 'the mask' brings it to the surface. Gunnar Hansen, the actor who played Leatherface originally, argued that, unlike Darth Vader, Leatherface isn't a character that could be unmasked; "If you took it off, there would be nothing underneath." He doesn't mean this literally, of course, but implies that the character's youthful and simple mind simply isn't up to the task of finding a "self", and thus relies on external stimuli - namely the masks and costumes he associates with them - to role play different personalities, including their gender.

Clover then went on to say that The Texas Chainsaw Massacre Part 2 features a wildly new interpretation of The Hitchhiker, complete with "the wounds from his accident at the end of the first film".

This is completely wrong.

Bill Mosley plays Chop Top, the "other" brother who (as is revealed when Stretch is in the meat locker) was fighting in Vietnam when the first film took place. The corpse that Leatherface wears as a suit in the opening murder of Part 2 is actually the remains of the Hitchhiker: it's even still wearing the cowhide bag around his neck! I know it's never explicitly stated that "Numbins" is Edwin Neal's character from the first film, and adding to this confusion is the fact that Tobe Hooper originally wanted Neal to return, but ended up settling on Bill Mosley* when they couldn't reach an agreement due to his performance in a short SOV spoof, The Texas Chainsaw Manicure.

*He wanted Gunnar Hansen to return, too, but Canon Films - who held the purse strings - were simply cheap bastards, which anyone who's seen more than half a dozen Canon pictures can probably figure out on their own. They also cut the living shit out of the film, deleting whole incest subplots and victims literally being raised like battery-farm animals by the "Sawyer" family. Sadly, Tobe's not a young and angry man anymore, so most of this is epic struggle for power is now glossed over on the recent Special Edition DVD.

It was about at this point that I ceased to be interested in whatever it was that Clover had to say about some of my favorite movies. It's not that some of the arguments she made weren't sound, but I feel that if she literally can't keep up with the basic continuity of these two films, how the hell is she supposed to give a proper analysis of them? She also completely glosses over the fact that Leatherface tries his best to "play" with Stretch on a simpler, child-like level even after their initial psuedo-sexual encounter by making a mask for her, literally trying to invite her into his world as she had done for him with his first (awesomely inappropriate) sexual encounter. I know the book was using TCM2 as an example of gender roles in modern horror films - it wasn't a TCM specific piece of literature - but how can you possibly gloss this over? Without presenting Leatherface in his entirety, whatever minor nuances you can pick from his character is meaningless anyway!

For the record, I'm going to assume that only parts 1 and 2 are "canon", as both were directed by Tobe Hooper (and likely remain the two best films he's ever made). Even the opening of Leatherface: The Texas Chainsaw Massacre III acknowledges that the 'original' Leatherface was imprisoned and executed. The "Remake" cycle is another discussion for another day. Also, both Leatherface and Return of the Texas Chainsaw Massacre suck. And hard. So it brings me great joy to simply pretend that they never happened.

This is but one far that's been burning in the back of my brain. I may be back with more grumblings on horror films in the future, but I just had to get this all off my chest before it worked its' way up to my brain and turned into cancer.
at 3:04 PM