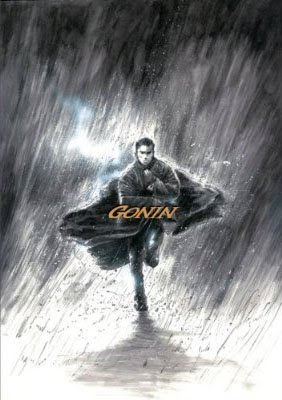 I recently did some translation work on Takashi Ishii's yakuza epic GONIN (aka: The Five).

Yeah, I know, it's available through Media Blasters in a two pack with its' wholly unrelated pseudo-remake Gonin 2, but Sirabella and co. only released the 109 minute Theatrical Cut based on the 10+ year old LD transfer. The work I did was specifically on the previously unseen Director's Cut footage - roughly 6 minutes of new material - which is being worked back into the already existing English translation, to inevitably be added to the Remastered R2 DVD.

It won't be a Kentai Films release, exactly, but I'm glad it'll be out there all the same. Damn good film. I can't wait to watch the film on a nice anamorphic transfer, having originally seen the MIA UK release which is one of the least pleasant NTSC-PAL conversions I can remember having seen. VIOLENT COP didn't look too hot on UK DVD either, but as that still doesn't have a watchable DVD anywhere else, so I guess there's no use complaining over spilled transfers.

In other news, Mnemosyne got licensed... in the United Kingdom. If it weren't for the NTSC-PAL conversion issues inherent with UK anime releases, I'd be on this like R. Kelly on a prom night after party. Fucking Australia has Evangelion 1.0, and we don't even get Oh! Edo Rocket in the US? Something is seriously messed up with the American anime industry right now...
at 6:28 PM