Oh, you've forgotten? Today is when the 世紀末救世主伝説 北斗の拳/Legend of the Century's End Savior HOKUTO NO KEN (ie: Fist of the North Star '86) came out on Japanese DVD. The good news is 90% of the flick looks great, with the first ever HD restoration of 35mm film elements, and the English dub is indeed included in its' entirety. There's also an alternate angle feature so you can watch the Japanese home video ending where Raou doesn't win, albeit culled from a letterboxed and composite tape master. There's a few never before seen features, a even a spiffy booklet, all for under $50. It's easily the best release of this classic film there's ever been, and odds of any international release being better are slim to none.

That's all of the good news.

So... bad news. IT'S STILL FUCKING CENSORED. I'm awaiting more screencaps to confirm if the 'edited' footage has any dot-crawl or similar composite video artifacts, but more likely than not they were just optically printed to fuck, and then spliced into either the original camera negative (OCN) or a 'new' Answer Print (AP) once the film had made its' theatrical rounds. The 35mm theater prints were uncensored, and I've shown y'all proof of that before. It may be possible that the "uncensored" negative was simply destroyed. I don't know. But even if that were the case, I find it hard to believe that Toei wouldn't have the damaged remains of a 35mm theatrical print they could cull the uncensored footage from and then just include as a special feature. Then again, the censoring methods were so severe and awkward that even splicing in an authentically grindhouse quality roadshow print may have yielded better results.

So, with Toei's incompetence having riled me up, I'm going to pass along some screengrabs that my buddy Jong sent to me a while ago. Recently the denzies of ADC have been hard at work adding the R1 Neil Nadelman subtitles to the R2 HD remaster of Hokuto no Ken TV. You'd think the HD restoration would look much better than the 5 year prior SD remaster... but of course, if that were the case I wouldn't be bringing it up in anger, now would I? 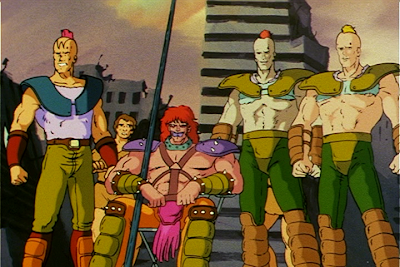 On the one hand, the SD transfer isn't perfect. There's some minor edge enhancement, and the contrast has led to some majorly overblown colors, looking so garish and bright that these punks appear to have stepped off an episode of Yo Gabba Gabba! 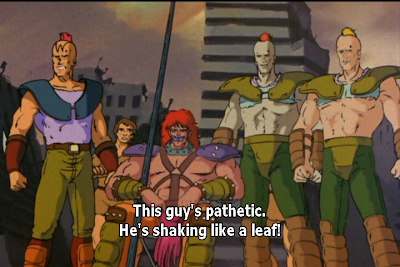 On the other hand, the HD remaster has magically lost virtually all of its' film grain. If you compare the subtle details - brush strokes in the background and lines in the victim dude's face - the High Definition remaster is actually softer than the Standard Definition remaster! Yes, the EE on the SD transfer means not all of that grain is 100% natural, but it looks more like 16mm film than this smeared looking transfer. One can argue that 16mm has an inherently grainy texture, and so using Noise Reduction to minimize it is actually a positive. Too all these people, I say compare the two - preferably zoomed in at fullscreen - and see how the HD remaster has lost detail along with that film grain. No, neither transfer is perfect, but the old transfer at least doesn't look like it's been digitally processed to Hell and back.

Let's do another comparison. Just for shits and giggles. 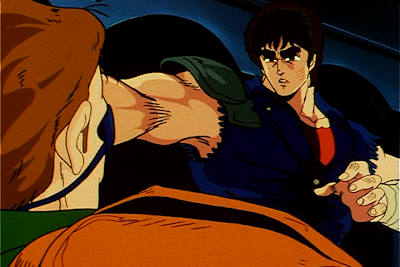 The SD transfer has crushed the black levels. 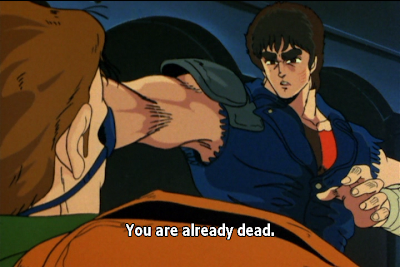 The HD transfer has smoothed out the outlines.

In this shot the HD transfer wins, but not because it's any sharper. The fact a newer HD transfer is inferior to an older NTSC transfer in any way is the reason the face palm was invented, and it seems to get more and more common as time goes on and studios start releasing their catalog titles in HD ready editions.

Personally, I'd be willing to sacrifice some black levels on as low budget a show as this if it means I could keep more of the hand-drawn details in the original film frames. The HD remaster also crops the bottom of the frame, but I don't know if the HD remaster is stretched to compensate or if the SD remaster was always squashed slightly. The Noise Reduction is the real bone to contend with, and odds are it was performed at the HD telecine stage, so if I really want to be smart and buy Hokuto no Ken in HD, I'd better get used to it being scrubbed completely clean of grain and fine detail.

Thanks For Sharing Information ;)

Thank you for sharing the information, the article is very interesting to read and may be useful for everything