My Patience Runs Red With The Blood Of Netflix

Remember how I rented PROFONDO ROSSO/DEEP RED, only to find it was a cheap-ass bootleg? I thought to myself "eh, no big deal, it's uncut and in scope I can manage". Well, there was one thing I didn't bother to check...

...if it was actually in English.

You see, Anchor Bay had made a big hairy deal out of having restored the film for the first time. What they actually did was spliced the English dubbed audio from the 98 minute Export version into the uncut 126 minute Integrale version, and for that half-hour of "new" footage, there simply was no English dubbing. The legitimate release from Anchor Bay/Blue Undeground includes both partial English subtitles for the scene where the English audio was lost (or maybe it was never recorded... nobody's ever certain on films this old), and also the Italian dub with full English subtitles. They also created English titles from scratch... which I sorta' went over last time. They look too digital for my tastes, but they're not quite as awful as those on the otherwise spectacular SHOGUN ASSASSINS restoration Animeigo cobbled together.

I don't mind watching films with subtitles portions in the slightest. I don't mind watching films in languages I don't even understand a word of without subtitles, so long as it's artistically able to hold my attention. But being handed a bootleg that forgot to steal the English subtitles is simply inexcusable. For the second time in a row I'm almost certain to sending a Dario film I really do want to see back to Netflix unwatched, and words can't rightly explain how pissed off I am for it.

Oh, fun. In Japan they released Profondo Rosso as SUSPIRIA 2, even though Suspiria came out two years after Profondo Rosso in Italy. L'INFERNO, which really was Suspiria part 2, was released simply as "Inferno".

To vent my rage, I share with you stolen JPG's of awesome vintage Japanese posters: 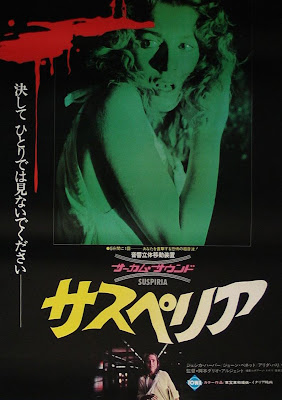 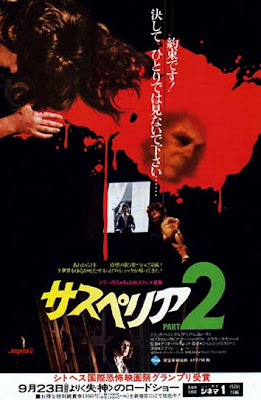 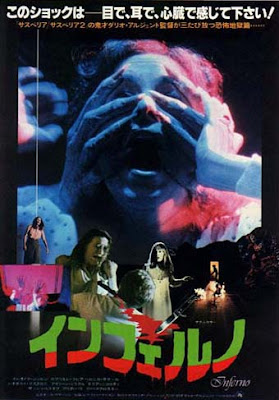 There's also something that Pioneer Japan is calling "Suspiria 2000". Don't get excited; it's just Al Festa's FATAL FRAMES.
at 11:12 PM