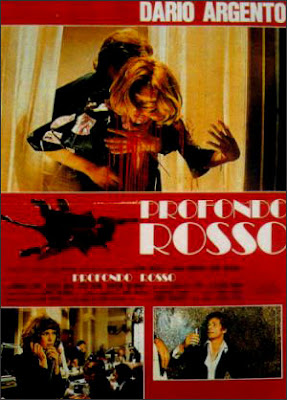 AGAIN with the fucking Dario bootlegs!
DEEP RED (Profondo Rosso) is yet another West Lake Entertainment bootleg to come to my door in a red prepaid envelope, despite listing it as if it were the official Anchor Bay R1, later released by Blue Underground at a lower price and with a new (far less fugly, but more spoileriffic...) cover. At least this time it's a DVD5 port of the official Anchor Bay restoration, rather than some god-awful vintage LD dump. All the same, if I wanted to pay for bootlegs I'd have premium usenet access by now. The fact that I'm paying $24 a month for a service that knows less about the legality of their releases than I do is staggering.

Frustratingly, the Anchor Bay restoration used an Italian print of the original 126 minute "Integral" cut, so during the final credits which originally scroll up over footage reflected in a pool of blood, AB decided to freeze-frame the last shot and then scroll up a 'new' English title crawl. Had the Italian credits been included as an extra this wouldn't be so bad, but basically no English language prints of the film include the original credit sequence, apart from (likely) some 4:3 LD dumps. What, Anchor Bay can't include alternate credit sequences as special features...? They did on Tenebrae, even!

Supposedly the best release of the 98 minute "Export" cut - so far is - on the UK 2 disc set from Platinum, which is cropped to 1.85:1 from its' original scope, and has burned-in English subtitles on Italian dialog. The Theatrical cut is also edited to obscure the sight of a dead lizard, which seeing as how Dario is a vegeterian and loves all living creatures, was almost certainly faked. Man, that $10 Blue Underground reissue is sounding better by the minute.
at 8:48 PM