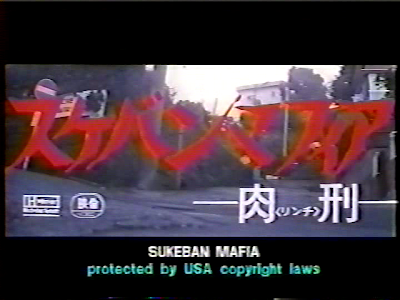 Video Search of Miami Bootleg
(Sure it's protected by US copyright laws... FROM VSoM!) 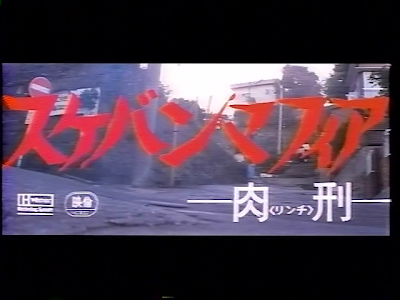 Kentai Films Transfer
(Note the lack of pretentious bullshit. On my part anyway.)

Well, this one isn't quite the jaw-dropper I was hoping it would be, but the original tape is to blame. Nikkatsu (for whatever reason) added pixel based censorship on what appears to be a pre-fogged theatrical Roman Porno, and the editing suite they used wreaked havoc on the source, giving me all sorts of aliasing and weird-ass blurring artifacts that seemingly come and go at random. At first I thought my usually reliable IVTC algorithm was just going nuts, but no, the flaws were only being magnified by my well-meaning attempts to restore the title. In the end I fixed the contrast ceiling, brought the firey saturation down a notch, de-blocked the transfer, let CCE SP worry about the IVTC duties, and wound up with... a pretty damn good looking VHS tape capture. No more, no less.

Y'know what? That's okay. All things considered I should be proud my copy doesn't look like an nth gen VCD like most of the Video Shit Miami catalog. Fuck Nikkatsu, fuck the NEVA, and fuck Video Search Miami while you're at it for almost having gotten this one right. This is the best looking VHS capture of SUKEBAN MAFIA (Girl Boss Mafia) that there ever has been, ever will be, and short of Nikkatsu making a brand new print and telecine, that's just the way it's gonna' be. Decent flick, at that. Check it when you have the chance.

I've come to realize that the built-in noise reduction in my VCR does lead to some slight chroma smearing... I don't like it, but I realize that not only is there probably chroma smearing on the original tape, but that turning it off also kills my Time Base Corrector. And I'll be damned if I'm using a JVC prosumer deck and turning off the TBC unless I absolutely have to.

In other news, Kurotokagi Gumi/Cannibal King released BOUNTY HUNTER MUYONOSUKE at a native 352x480 "Half D-1" resolution, cutting just over half of the horizontal resolution of the R2 DVD they likely sourced it from. I doubt anyone but me noticed. Or would care if they did.