Happy Post-Halloween, ladies and gentlemen. Yeah, I didn't go out and watch a horror movie in the theater, but as SAW V was the best option in town, I don't feel so bad for staying in and watching THE MIDNIGHT MEAT TRAIN instead. (HARD CANDY wasn't half bad either.) A damn shame it was buried and released to fucking dollar theaters, and was further ghettoized by being put on Free(!?) On Demand before it gets a proper DVD and, I hope, Blu-ray release. The film deserves better, and the CEO of Lionsgate really ought to be ashamed of himself for treating it (and REPO) like redheaded stepchildren. 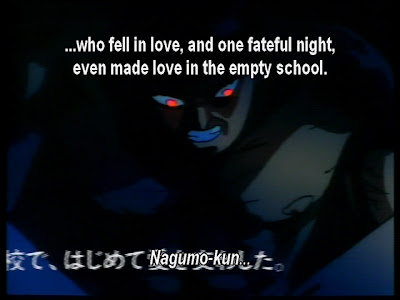 In a shocking - I say it again, shocking! - turn of events, I've created a "2.0" version of UROTSUKIDOJI V: THE FINAL CHAPTER, with full subtitles on the 8 minute long opening scene cut from the German DVD the original Kentai release was based on. Thanks go out to Yui for taking a crack at all that evil scrolling kanji, and Caterpillar for prodding me into actually doing it.

Yeah,the White-On-White looks like shit, I know, but it only happens like two, maybe three times total. This'll get a "real" release with full menus and extras eventually, so I can fix it then. Just rest easy knowing that the entire opening is translated for the first time, ever, in any language.

However, it's not on ADC. Partly because it's z0mgtehp00n, even moreso than Violence Jack: Evil Town ever was (by nature, rather than in how blatantly graphic it is... I think Violence Jack actually has way more on-screen cock), and partly because I spent so much time on this project that if I'm going to part with copies of it, I'd really rather it be for cash than share ratio, just so I can grab R2 fansubs of Sekirei and Sayonara Zetsubou Sensei. Not that I don't appreciate the effort and all, but... eh, it's hard to describe how ridiculously protective I am of my guro-babies. I myself don't even really get it.

I was going to tell you guys to forget about Uro, becase instead I've patched the Kentai Films version of ANGEL COP VOL. 3 with fixed "Damn the Jews!" subtitles and everything, but... I've hit a snag. I don't know why the patch died half-way through, but it's worrying me. A lot. The upside is I DO still have all of the separate elements - menus, buttons, video and audio tracks - so if worse comes to worse, and I actually have to re-make this fucking DVD from scratch, it's at least theoretically possible. I think.

...would it be worth the toll it takes on my daily sanity, is the question.

Having also finished the Giger Fandisc (also not on ADC because... well, it isn't Asian in nature aside from the burned-in Japanese subtitle), I present to you the single hottest monster girl I have ever set eyes on: 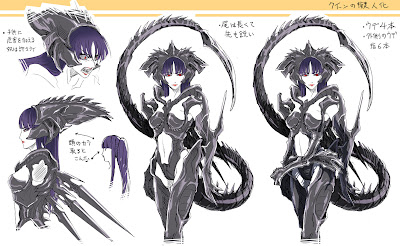 I'll never jack off to Naga pornography again...
Kinda' sad the teeny-tiny vestigial T-Rex arms aren't her bra cups, but maybe I'll get full of myself and draw that personally. Not that any of you would jerk off to my scribbles, but much like Kentai Films, it's all about my own personal satisfaction.
at 1:19 AM