So... how do you spell Dhampir in katakana, again?

For ages I couldn't wrap my brain around why Kevin Leahy, translator of the Vampire Hunter D novel series originally written by KIKUCHI Hideyuki, translated ラミーカ the way he did. The old Streamline dub went with "Lamica", which having such strong nostalgic ties to my brains seemed the only logical translation for the Japanese pronunciation, 'Rah-mii-ka'. It wasn't until giving the original Vampire Hunter D '85 OVA subtitles a once-over that the translation finally sunk in.

So who's Carmilla, besides the original villainess in Kawajiri's follow-up Vampire Hunter D film? She's actually the original English language fictional vampire, with Sheridan Le Fanu's Irish tale of a nocturnal predatory lesbian who transforms into animals, passes through solid matter, and sleeps in a coffin were ripped off wholesale by Bram Stoker some twenty-five years later. But I won't pretend I'm a genius: I wiki'd her ass, like everyone else.

Several other names - Golem, Garou, and Midwich among them - are references to horror stories, old and new. Golem is actually a Jewish myth about intimate matter (like clay) brought to life by those with a powerful control of their faith, and is best known for the silent 1915 German horror film, Der Golem. Garou is a slightly more esoteric reference, but "loup-garou" is French for Werewolf, with the 'Garou' part being the English equivalent to "Were". I'm actually glad I checked "Midwich", as it's a Village of the Damned/The Midwich Cuckoos reference, which is a title I've never seen, much less knew how to spell a gag from properly. I know, Carpenter directed the remake, so you'd think I'd own it already or, something. Gimlet is actually the name of a 19th century style hand drill... also a gin 'n' lime cocktail. I don't know Kikuchi well enough to know which use of the word he was interested in, but I'd assume the latter use is more well known than the former. The name Count Lee is obviously a nod to Christopher Lee, the gaunt and charming British actor who brought Dracula to life in the late 1950s via Hammer Studios, and is probably better known now for being Count Dooku and various Tim Burton father figures after Vincent Price passed away. 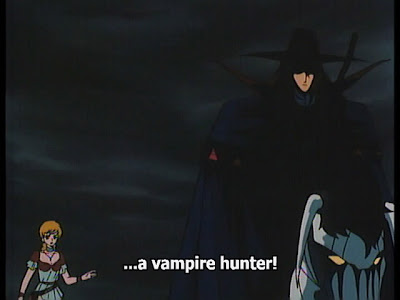 Oh, did I not mention that? VAMPIRE HUNTER D '85 OVA, Kentai Films fansub is now available on ADC, and will almost surely be ripped to a Usenet client near you. It's not the epic restored version that I've been stewing on for years (literally, years... God, where did I go wrong?), but it still looks a lot better than the US DVD, and it's got the (theoretically) final Kentai Films translation to boot. If you want extras, English audio and all the nice things I still have planned for it, I'm afraid you're going to have to wait like everyone else. Otherwise this should be a nice way to fill in that gap of a generally watchable, subtitled print of the classic.

Special thanks to Thanatos for his translation of YOUR SONG. A shame I forgot to credit him in the subtitles, as the plan was to put the thanks in the "new" Kentai menus. So, if you happen to leech it off of Usenet and the NFO doesn't mention him, well... now you know.
at 2:46 AM