Remember a month or go ago when I said "Something is seriously messed up with the American anime industry right now..."?

A friend of mine pointed out that roughly a dozen shows have aired via YouTube, Bost, Crunchy 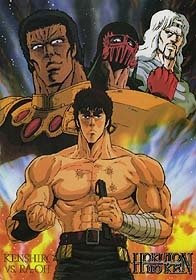 Roll, Hulu, Joost and (I'm sure) other similar streaming services that have zero plans for a R1 DVD release. This grows even further when we consider all of Toeis' properties currently on sale at Direct2Drive (and now, God help us, Crunchy Roll) . This awkward imbalance at first seems to suggest something that I half-championed myself a year ago; the notion that freely available fansubs don't directly harm the profitability of a title. I maintain this to some degree, but perhaps not to the level I once did.

Japanese studios like Gonzo, Kadokawa, Pierrot, Toei and others literally giving their shows away on Youtube firmly establishes one of two things: either sales literally aren't effected by broadcasting the show for free, or that they know it's going to get bootlegged anyway, and they figure beating them to the punch at least gets them some face time. As most anime airs on free basic Japanese broadcast, allowing Japanese fans the chance to tell if they like a series before they invest heavily in an expensive DVD release, it doesn't seem totally unfair to me for American fans to want the same chance to Yay or Nay their potential favorites. Japan has realized this, and given America its' fair chance: you can watch a mediocre stream of even my beloved Fist of the North Star on the Crunchy Roll for free, or belly up and download the episode in a near-NTSC resolution DivX file for $1.99 an episode, or even just pay a monthly fee and then watch the same quality broadcast for free. 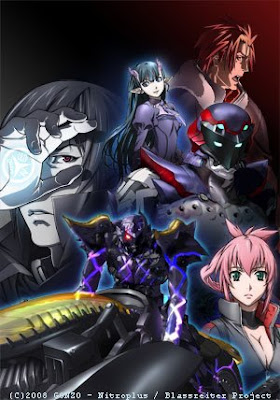 The download-to-own model isn't one I'm totally against... but it has started a worrisome trend. Remember BLASSREITER? Sure you do. It was Ichirou ITANO's first TV show after GANTZ. It was also Ichirou's first failure... or, at least the first episode failed hard enough that I never bothered to watch any more after that. (Yes, I'm going to try again... I owe him that much after Angel Cop.) I can buy the whole show via h.264 downloads, literally paying whatever I want - even 5 cents an episode! - as a "donation" straight to Gonzo. It's actually quite a clever and fascinating way to allow Americans to put their money where their mouth is over wither or not they're just bottom feeding anime leeches, or wither the R1 DVD being "too expensive" and "out too late" is really the issue.

Here's what I can't do: buy the show on subtitled DVD. I can actually steal it that way, but I'd really rather just buy it. Pretty covers, that warm fuzzy feeling of supporting starving animators, reasonably high quality audio/video... honestly, what's not to love?

It's really just an open secret that sales for anime are in the crapper here in North America, despite Japan selling upwards of 20,000 - 40,000 copies per DVD on otaku centric shows, despite their usual retail price of over $15 USD per episode. Some studios have admitted that sales are worse now than they were a decade ago when dubbed VHS selling at $25 for an hour of content were king. Urban Vision, Central Park Media, Illumation, Geneon, and so many other distributors have effectively ceased to bring "new" anime titles to the US market, despite some of them still surviving on paper, leaving us with a relatively narrow number of distributors in the US to expect anime from on DVD:

Beyond that, uh... maybe AnimEigo, once in a blue moon? JapanAnime/AnimeWho once or twice a year? That's it, ladies and gentlemen. Game, set, fucking match.

FUNimation and Bandai seemingly have the right idea, releasing multi-episode collections at a visibly lower cost than the traditional "singles" model, with some titles still getting both singles and limited deluxe editions. Viz releases sets seemingly only when they have to, but also focus on multimedia releases that they can cross-promote with basic cable broadcasts and manga licenses they've already pushed onto the market. Media Blasters has taken an alternate route of continuing to release singles, increasingly often without English dubs and a lower sticker price. Nozomi Entertainment has done both, focusing on limited edition sub-only releases catering specifically to the botique crowd. Animeigo... well, they release mostly chanbara and Miike films these days, so don't get your hopes up that they'll bring over Soul Eater or anything.

What troubles me, however, is the fact that with some 9 months of streaming experiments, none 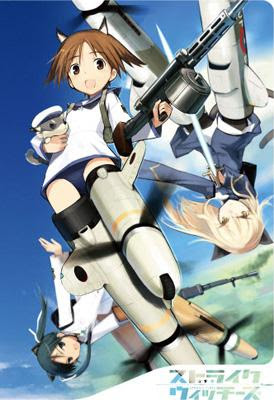 of the shows not already announced as having been licensed by a US distributor (say, FUNimation handling Black Blood Brothers) has announced plans for an American home video release. I'm not asking for a solicitation with full specs, just so much as a "we'll release it on DVD eventually" would be just fine. While I figured Blassreiter in particular would be a no-brainer license for FUNimation, the fact that Gonzo is selling AND giving the show away online means that FUNi's chance to release the show for internet broadcast/download, and possibly even TV broadcast rights are severely marginalized, if simply not available at all. US anime licenses typically include home video, TV, and internet these days... I'm not seeing internet as a viable option for the US release of any of these shows, which means that 1/3 of the license is now worthless*. Hell, if I were active in licensing foreign entertainment I wouldn't want to throw money at a deal missing a major broadcast option, either.

*That's not to imply that internet broadcasts account for 1/3 of the profits the R1 studios might make, just that it's one of three ways to distribute the title. There are also merchandising rights, but unless you're dealing with a show like Naruto or Dragonball Z, they're effectively worthless. Americans won't even pay to watch anime, forget paying to own art books or model kits.

The R1 market has been saying that freebies cut into legitimate media sales... to which Japan said "okay then, no more freebies unless WE say so". The trouble is the only people who pay for anime in the first place are the people who are already buying it on DVD. Sure, "donating" via CR or whatever promises that the Japanese studios that created the series will get at least some minuscule cut, and that's all well and good, but what it isn't doing is supporting the AMERICAN industry - something I've been saying since Gonzo announced their plans pushing one year ago. I wanted to be positive, and assume that good online performance would lead to an inevitable home video release, but I'm seeing zero proof of that thus far, and frankly, it has me worried.

Japan has always had a very... well, skewed theory on what Americans want. Particularly the picky beast that is the rare American willing to drop $25 on a few episodes of foreign cartoons...

Toei treated distinctly Japanese titles - like Slam Dunk and Air Master - like an American property at a reasonable price, with English dubbing and (dub)btitles for the Japanese track, but failed to include previews, basic extras, or even useful chapter stops. They failed.

Bandai Visual treated their distinctly niche-oriented titles like a Japanese product, offering subtitled only DVDs at prices closer to what a Japanese audience would pay. They failed... hard. Yet even now they exist as a subsidiary of Bandai Entertainment International, proving that there is simply no justice in the world.

Urban Vision's (Japanese) founder started co-producing original content that would appeal to both American and Japanese audiences, mostly by riding on the coat-tails of Kawajiri and Kitamura. Guess what? Yeah. Failed.

Kadokawa USA, to their credit, realize they have no fucking clue what OCD American fans want, and thus distribute their titles directly to US licensors who claim to and then split the profits. They're the rare Japanese corporation who asked for help in a crazy marketplace, and considering that it gets us everything from Lucky*Star to MPD Psycho, I'd call it a positive for both parties. 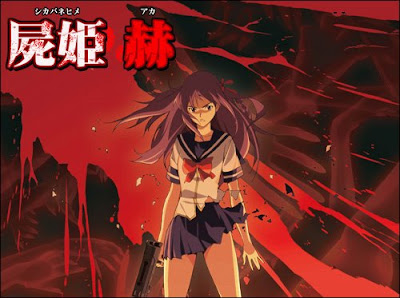 Not all hope is lost, of course. For one thing, FUNimation has the broadcast rights to SHIKABANE HIME, so at the very least Gainax is still willing to let international parties sell its' shows. Some studios, like Madhouse, simply don't bother streaming anything, and theoretically are in the same boat. Despite NARUTO SHIPPUDEN airing sub-only on CR as a simultaneous US release, they're apparently still dubbing the series, and there's no way Viz would bother if cable broadcast and DVD releases weren't going to happen in the future.

Finally - and this is the one that strikes me as fascinating - FUTARI WA PRETTYCURE, the bipolar fusion of Cardcaptor Sakura and Dragonball Z, is going to air dubbed in English on YTV in Canada next year while Toei continues to peddle VHS quality Nippon Golden Networks versions via D2D. Some shows have an almost guaranteed English dubbed broadcast, and short of 4Kids being involved that usually means a DVD release will happen eventually. Toei bombed last time, though, so wither they'll simply try again (and fail) or will take a drastically different approach - one that people like myself may not like - has yet to be seen.

Particularly for shows that only appeal to a tiny segment of fans in America to begin with - like Hokuto no Ken, Galaxy Express 999 TV, Shugo Chara, and Steel Angel Kurumi Zero - I can't fault Japanese distributors for only offering an inexpensive download/stream option. Mass producing a few thousand DVDs likely is not worth their initial investment, and will just lead to hundreds (or even thousands) of unsold copies that need to be liquidated later. I don't like the thought of truly "niche" anime releases never getting released on DVD, but I've heard enough doom and gloom talk from the people who actually sell it to understand that legit online distribution for these titles is still better than no distribution at all. I sure as hell wouldn't pay $2 an episode for Galaxy Express, but for Hokuto no Ken it's a steal (wink), and I'm sure someone else out there is just as crazy as I am but argues that these two titles are swapped. For both of us, there's a more or less satisfactory option, and we should all be at least somewhat satisfied for it.

Unfortunately, there seems to be a line drawn in the sand, where even shows that are clearly marketable in the US - Digimon 02, Blassreiter, and Duraga: Ages of Uruk, to name the most blatant examples - that are in the same "download or nothing" boat. That just can't be right. Some of the titles on display, particularly Strike Witches, seem borderline on wither or not a DVD release would be profitable... but all I can say is that, amusing fetish show or not, if Gonzo wants my money they'd better get a reasonably priced subtitled DVD out there. Paying for a DivX file is bad enough. Paying for the edited TV broadcast is even worse. Paying for both with no guarantee of a better release later on? That's just inexcusable.
at 1:56 PM