Back in, oh, I guess late 2004 I was told by my legitimate employer that he was thinking of releasing a nasty little Japanese film called KO-GAL GUI: OOSAKA TELE-CLU HEN. The issue holding the decision at bay was that he was already pushing against every boundary there was in the market place with his current catalog, and being that he was co-producing some original stuff that pushed even harder, he was worried that his studio could wind up being the target of a bullshit obscenity trial. (He's right, it only takes one twat with an agenda to fuck it up for everybody.) Japan Shock had just announced that they would be releasing the title with English subtitles, and deciding to offer the license to a friend of his he balked at the thought to so much as tell his Japanese associates their miniscule offer. In the end, like so many titles my well meaning boss courted, it just wasn't worth the money or headache it would cause... but at least we'd always have Japan Shock.

Well, lucky for me Japan Shock didn't so much translate the film as they did have some dude get shitfaced, watch it through once and then literally make subtitles up out of thin air as he went. 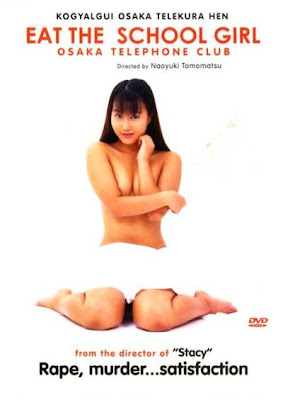 The JS translation was so incomprehensible and nonsensical that even the simplest of Japanese - "Okaasan!" - winds up being 'I did it!' or some bullshit that renders the scene meaningless. To properly show you how terrible this translation is, allow me to directly compare a short piece of dialog:

- Listen honey, you shouldn't call so much. It is just too expensive for you.

- None of your bloody business.

- I imagine this other girl. She's pretty. And she kills people.

While I acknowledge my own weaknesses as a translator, at least I'm competent enough to sit down with a pair of headphones, a Japanese<->English dictionary, and can come back telling you what almost any given scene is about. Especially when you factor in the incomprehensible evil that is Osaka dialect, that's not a feat that was honed without years of practice translating children's fighting comics and depraved pornography, with a liberal spattering of various cult movies in between. What Japan Shock provided was not a translation, it was an abomination... and not even a particularly amusing one like FUNimation's Shinchan, or even What's Up, Tigerlilly? It's just the worst kind of awful, stupid shit, and proves that Japan Shock was too cheap to hire a translator who understood a word of Japanese. At least the guy who made the script up was smart enough to spend all the money on booze before he started getting creative... I guess. 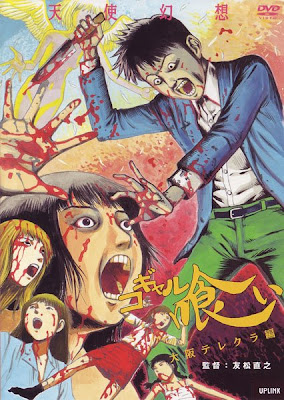 Anyway, since I love Japanese exploitation... and, a friend of mine would hire a stranger to do it anyway, expect to see a fully translated (for the first time ever!) version of EAT THE SCHOOL GIRL: OSAKA TELEPHONE CLUB STORY in the very near future. I'm really just fine-tuning a couple aspects at this point, ensuring that the final DVD will meet not only my expectations, but will wipe the floor with Japan Shock's release in every possible way. It just seems the least I can do.

I'll give a thumbs-up when the DVD is patched and ready for the masses. Or at least the 20 people who'll be interested.
at 12:29 PM