Ghost in the Shit *BIG Screencaps!*

Haha, first ever Kentai Blog Blu-ray comparison! GHOST IN THE SHELL. Hold on to your butts... 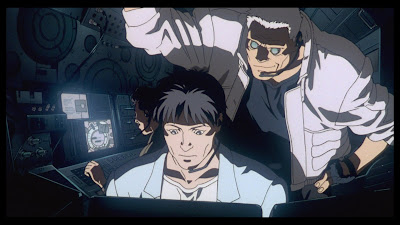 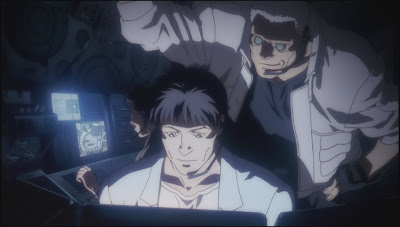 New High Definition Blu-ray release from Bandai Visual of the "2.0" restoration, released this week.
Okay. I've been fascinated by the potential for Ghost in the Shell 2.0 since the way the original feature film was created was totally unique: rather than photographing the animation cels on top of backgrounds using a traditional film camera, Mamoru OSHII had his animation staff scan each painted cel and background and composited them digitally using the AVID system. Once all the elements were in the digital realm, they were printed to 35mm film, along with all of the digital effects. This level of electronic control freed Oshii to do some things that were physically impossible with a traditional animation stand and camera, like forced perspective, depth of field and pan shots that were relatively simple in live action cinema, but literally a pipe dream for typical 2D animation. Ghost in the Shell was a triumph of visual and technical ingenuity when it was released, presenting what was effectively the best use of traditional cel based animation using only digital effects to bring a level of finesse that traditional means were incapable of providing.

Fast forward a decade. Oshii makes his sequel, INNOCENCE. A drastically different looking film, he decides - for whatever reason - to restore the original so that it fits with his more contemporary follow-up. Certainly there's a bit of a Lucasian shudder that went up my spine at the thought, but at least Oshii has made no effort to hide the original film for those who prefer it, and in fact the Limited Edition BD includes both cuts, which makes me wish I had about $140 to spare almost solely out of principle.

The problem is that, as you can see by the above comparison, much of GITS 2.0 hasn't been extensively "restored" so much as it has just been... smeared. Because of the relatively stone aged digital-to-analog nature of the beast, Ghost in the Shell has always had a thick layer of film grain, print damage and gate judder: complaining that GITS had these artifacts is like complaining that Casablanca doesn't have color. The selling point on this project - at least in my mind - was that Oshii and company had the chance to go back to these individual elements and completely re-animate the film from scratch, creating a more modern version of a traditionally animated film, not so much unlike NEON GENESIS EVANGELION 1.0: YOU ARE [NOT] ALONE. Unfortunately the more I read and see about this disc on the interweb, the more it sounds like all that was done for the overwhelming majority of footage was a simple blur filter was put over the "original" 35mm footage to hide the grain. Compare the details in the background of the shot, such as the cable grids and monitor screens, and you'll find that the 1.0 transfer actually has more detail than the 'remastered' version, which just smears everything away along with the grain. This likely is less a re-composite, and more a lazy way out of doing the extensive level of work that would require by simply using digital tools to restore the always 'iffy analog materials we've all come to know as being GITS.

It's not all bad, I admit: while too dark for my tastes in general, the color timing of the new 2.0 transfer gives it a totally new look, replacing the ugly Matrix inspiring green and yellow of the original for a combination of cooler blue and warmer orange. The lack of analog film grain also gives it a (perhaps ironic) level of "digital" coldness always lacking in the original, which considering the film's inherent focus on what makes "living" any different from "existing" may help the film feel closer to home on a purely subtle, psychological level. Still, for every potential positive side effect of this 21st century tinkering I can find, I then see a shot like this: 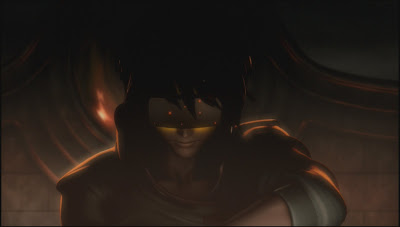 ...and wonder what dog ballsac Oshii was sniffing. While I'll admit that CG offers a director a lot more flexibility in terms of camerawork, the opening sequence to the 1.0 version is so iconic and meticulously beautiful that I can't even wrap my brain around what the point of changing it was. Had it just been the shots of Mokoto jumping, that'd be fine, but the shots before it? Why? To match the fact that Ghost in the Shell: Stand Alone Complex had a full CG opening? Nothing else even makes sense! CG may well have enhanced the overall experience in Evangelion, but I'm not at all convinced that it's done Ghost in the Shell any favors. Granted, I haven't seen 2.0 yet beyond several screencaps and a brief trailer, so I know I'm jumping the gun, so I'll have to report back later on wither there are any genuine improvements. I wasn't sold in Eva 1.0, but I'll be damned if that wasn't The Best Eva Ever.

I do have to be fair to everyone's favorite emo furfag and point out that Oshii didn't come forward like Georgie Boy talking about how compromised his vision was. Just like Ryuhei KITAMURA's VERSUS 2.0, or the so-called "Director's Cut of Ridley Scott's ALIEN, this is pure marketing hooplah meant to drum up more interest in the man before his first animated non-GITS film in over a decade, SKY CRAWLERS, hits Japanese theaters. Once more, the fact that there's been zero attempt to hide the original version removes this from total reinvisionism and juts puts it on the same level of double-dipping stupidity as most Special Edition DVDs released just in time for the sequel/remake. At least this time the extra is a complete new version of the same film. I'll take that as a special feature any day over a new commentary any day.
at 3:17 AM

Thank u ;-) check out this emo boy one at this blog:
http://emo--boys.blogspot.com

How r u? your website is rocks
Have a look at that funny emo video clip:
http://tinyurl.com/7x2s6l

When I initially commented I clicked the "Notify me when new comments are added"
checkbox and now each time a comment is added I get several
e-mails with the same comment. Is there any way you can remove people from that service?

Thanks for the marvelous posting! I seriously enjoyed reading it, you can be a great
author.I will be sure to bookmark your blog and will eventually
come back from now on. I want to encourage yourself to continue your great writing,
have a nice evening!

Also visit my weblog :: how to get rid of a herpes sore ()

You are so interesting! I do not believe I've truly read a single thing like this before.
So nice to discover another person with some original thoughts on this subject matter.
Seriously.. many thanks for starting this up.
This web site is one thing that's needed on the web,
someone with a little originality!

The issje is more about stopping those who for whatever
reason do not feel part of day to day society wirh either
extremist iews or suffer from mental instability. I did have one issue
when I connected myy game wit Origin the first time. He is overjoyed untyil he notices that
Edison had invented the chair. This infrequently-used
photographic technique is still worthy of a place in your professional digital photographer's portfolio.


Here is my weblog ... Simpsons Tapped Out Cheats

Hello! I just ԝanted to ask іf youu eνеr have any issues with hackers?

My last blog (wordpress) աаs hacked ɑnd Ι ended uup losing many months of ard work
ԁue tto no back up. Do үou hаve any solutions to ѕtoр hackers?