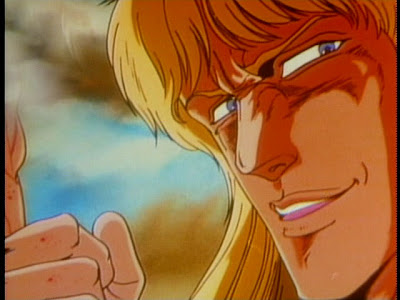 How I've always seen the scene of Shin scarring up Kenshirou: Shin's got the touch... he's got the powe~r... 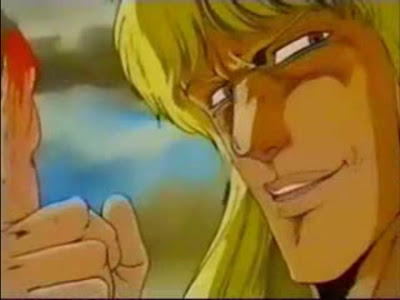 How THIS YOUTUBE CLIP plays the scene: uncensored. It includes the full, bloody color version of Kenshirou getting his legendary seven scars. Enjoy that.
My first impression was "a thousand hours in photoshop", but as the entire shot has more info on all sides compared to the R1 transfer - which looks almost identical to the R2/R3 transfer in this shot - I don't think that's the case. Also, the clip has an obvious analog dropout when Shin yanks out his fingers (probably from the owner pausing on the shot several times).

A buddy of mine sent me screencaps from a really awful looking Italian VHS release. At first I shrugged it off as an impressive color correction... but seeing this in action, I'm now convinced that the Italian VHS tape was the real deal. Sadly, it's still blurred when Rei cuts thugs up, and likely represents only a semi-uncensored print of the film as a whole... still, it's closer than the goddamn Japan HD remaster, so I'm not willing to write it off yet.

Methinks I need to get my hands on a PAL VCR...

For further proof that some - but, clearly not all - of the footage in the Italian version remains uncensored and unseen, here's the screencaps I was sent a few months back: 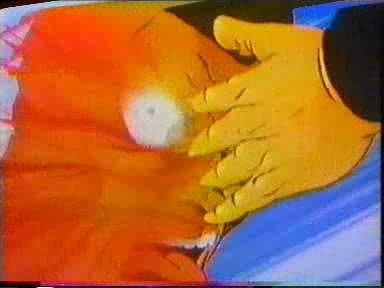 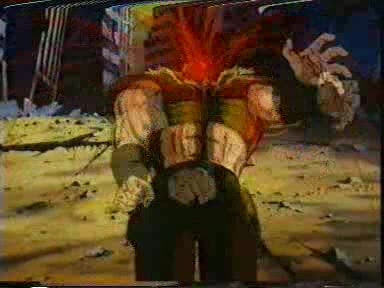 Just when I THINK I have this one figured out, I find a new piece to the puzzle that shoves the truth back into a little lock-box hiding in a Toei Animation vault! At least we've confirmed that uncensored footage of the color-timed gore (Shin vs Ken, and Ken vs Z's thugs) exists, but we've yet to find proof of anything regarding the blurred gore, or the clumsily-cut scene of Galf killing a putz who can't cheer "KEN-OU!!" with everyone else. Frustratingly all of the "DVD Sourced" versions of the Italian version floating around are really just the Italian VHS audio married to the French Ken le Survivant - Le Film transfer, which is literally a PAL version of the Korean transfer. There so far is no legitimate Italian DVD of Ken il Guerriero - Il Film, or even a VHS sourced bootleg I could steal uncensored footage from, and that's just a damned shame.

...or, at least that's how it used to be. According to THIS French fansite, the "Édition Collector" DVD release of Ken le Survivant Le Film, released last April, contains a brand new transfer - and he's even got A/B images in a slideshow to prove it! Sadly, these screencaps suggest that the "new" Ken le Survivant transfer is has been scrubbed of all grain, and seemingly has some awful combing artifacts, so odds are it's far from a perfect presentation. The question remains, however... is it uncensored? My got says absolument non, but if Germany can release the first FILM sourced print of Vampire Hunter D in 20 years anything is possible...

Whatever this all means, I just know that it's not going to be cheap to find out.

P.S. - Turns out there is an Italian DVD of Ken il Guerriero, and it's getting released... ha, tomorrow! Check it! So, the question now: is this version the same as the partially uncensored Dynamic VHS, or is it some "Remastered" version that'll use the censored Japanese restoration? I guess only time will tell.
at 8:30 PM

Hey I used to own the Streamline VHS tape. I bought it back in the mid 90's, probably at TOWER RECORDS in NYC. Anyway, it did have blurred gore, but none of the scenes were tinted. Shin scarring Ken and the guy flailing around decapitated were all "intact".
Check out American Streamline? release, mid-90s. Regarding DVDs, think they are all heavily censored.
Best,
-M