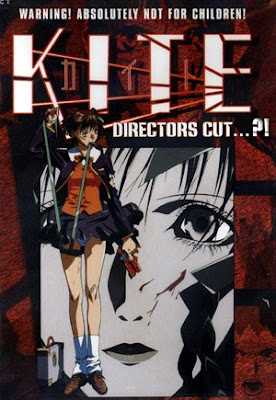 I swear, sometimes Media Blasters does these things just fuck with me...
In March, a "2009 remaster" of UMETSU Yasuomi's masterpiece A-KITE will be released on DVD by Anime Works with a reasonable retail price of $20. Considering the impressive work that's been done with BERSERK, my fears aren't that the restoration itself will be fucked up... rather, the problem is that A-Kite is a film with several different editions floating around, and while I can't fault people who prefer the version that I don't, the differences are so drastic that I'd rather not support the version that's actually being announced.

For those who don't know UMETSU, he's a demigod of hot pointy women, exploding bullets, and over the top picaresque action. Aside from providing the character designs for Megazone 23 Part 2, the storyboard for Yellow Star, the ED sequence of Girls' High and key animation for the first episode of Angel Cop, he's probably best known for having directed A-KITE and MEZZO FORTE. Initially a concept of a gritty girl-with-guns action title coursing with violence and sex appeal, his plan to turn the show into a TV series back in the mid 1990s was met with resistance. Producers, believing in the core concept, suggested that he rewrite the title to include graphic sex and sell it to the 18+ Ero Anime crowd, where he would be allowed both the budget and the creative freedom to pull off his Luc Besson/John Woo inspired set pieces. Eventually Umetsu did just that, releasing A-Kite as a two episode OVA in 1998. Mezzo Forte, despite its' lighter tone and higher budget, are the satirical extension of the groundwork laid down in A-Kite. The Opera to Umetsu's Phenomena, if you will.

Things get complicated from there. The series was licensed by the then fledgling Media Blasters in the United States, who loved the gruesome violence and gritty urban drama, but were worried that a pair of blatant pedophilia sequences detailing the heroine Sawa's unpleasant and personality defining past would kill them in no time with lawsuits that would be impossible (or at least expensive) to defend. Rather than take the risk, John Sirabella and co. removed all traces of graphic sex from the short series, keeping only a few moments of brief nudity and implications of post-coitus pillow talk. They also edited the two episodes into a single movie, which leads to a jarring sequence that was one of the things fixed in the "Director's Edit"... but, more on that later. This shortened, sex-free version I'll call "Kite" for now.

When fans requested an uncut version be made available, the former MB customer affairs representative actually said that 'only pedophiles would want this title uncut', and was shortly thereafter fired for calling potential customers (many of whom didn't even KNOW what the uncut version was like!) a bunch of morally corrupt creepazoids. I mean, we are, but that's not the point: if you license pedo anime, you don't call us freaks for it. Common sense, right? John Sirabella has since taken over any and all representation to the fans for the company, and it's generally a positive change... even if it occasionally makes him a solid target for those displeased with his work to throw stones at.

"My word! This, Umetsu character put child pornography into a non-pornographic title just to get funding?! Ew... Well, we're better off not having the uncut version then, right? It's all just vile and sick masturbatory material made to satisfy the producers and lowlife sickos, correct?" - I hear some of you thinking.

Unfortunately for anyone morally offended by fictional characters having fictional sex as represented by lines on paper, A-Kite is a complex beast in which the hardcore scenes not only flesh out the gritty pulp noir Tokyo that the characters inhabit, but the way in which they react to forced sexual encounters, and even one another during them, further establish the characters themselves. For one thing, the Svengali-esque Akai has Sawa kill pedophiles for him, but in the uncut version we see the hypocrisy of this since Akai is clearly a child predator himself. Similarly a specific scene shortly after Sawa's boyfriend Oburi gets dragged off by Kanie loses all meaning in the Kite cut, and it actually makes Sawa look like a total heartless bitch!

A-Kite is a story told primarily through actions rather than words, so the edits made to the title were quite detrimental to the already subtle character development. "Kite" is a thrilling action spectacle, but compared to the uncut version, A-Kite, it feels quite empty and fragmented. Even if you can't tell footage is missing, the motives for Sawa's actions remain unclear, and as the heart and soul of the story is the tale of this young assassin's struggle to sever her ties with her cruel and heartless caretaker, then a large part of what makes A-Kite so powerful is simply missing from the heavily edited initial US version.

Note that I said "heavily edited"?

After years of complaints, Media Blasters - through their newer adult anime line, Kitty Media - released the "Kite: Director's Cut", which ran 50 minutes versus the Anime Works' mere 45. While this restored all 6 sex scenes, several fleeting moments of Sawa being molested as a girl were still cut. The implications of her abuse are enough, I suppose, but watching her confused expressions and seeing her cling to him as a source of strength after an already horrifically traumatizing period in her life give life to her conflicted nature of both hating him, and looking up to him as a protector, father, and yes, lover.

Seemingly to further establish that Japanese otaku want to be American as much as American otaku want to be Japanese, the series was re-released in Japan sans-porn and with the MB English dub under the title "A-Kite International Version: Director's Edit". Ironically, several shots of child molestation cut from even the US "Director's Cut" are present on the Japanese R-15 rated Director's Edit DVD, further establishing how fascinatingly different our two cultures' attitudes toward sexuality (and especially pedophilia) are. $5 says that if English dub audio had existed the 'Director's Edit' would have kept some of the sex scenes, too, but it didn't, so this is all a frustrated theory of mine and nothing more.

So... confession time. The very first 'official' Kentai Films DVD was none other than my own A-KITE: UNCUT AND UNCENSORED. It was a terrible, terrible PAL-NTSC conversion from the unedited German DVD released by OVA Films with terrible menus and barely readable subtitles and a woefully incomplete Umetsu filmography as the best extra I could come up with. At the time, I didn't know shit about fuck, but somehow I slapped a working DVD together and made a small fortune on eBay for about two or three months. Then, out of the blue, Media Blasters announces that it's going to release an official DVD of Kite: Uncut. Being the noble sort of chap that I am, I quietly retired the title and went about my business of stealing other titles not yet available in Freedomland uncut.

Sure enough, the "Uncut" R1 DVD was exactly as promised, with every second of dirty footage intact, and the unexpected surprise of featuring a brand new Umetsu interview. It was all I'd ever wanted to see, and while I can't prove anything, I do find it suspicious as all hell that the moment my own bootleg starts getting bid up to $50 and over, Media Blasters' decides that it's time to risk going to jail for peddling animated kinderporno, an act they've yet to risk since, going as far as to remove entire scenes from LEGEND OF THE PERVERT. Heck, even the Kite/Mezzo Forte "Uncut" 2-pack includes the less graphic 'Director's Cut', and it was such a last minute change that Media Blasters had to put a sticker on the DVD cover insert! My theory on this remains that it was less a matter of fear from being tried for obscenity, and more the realization that with the Uncut and Director's Cut versions both costing $30, no-one in their right mind would buy the DC anymore, so if you toss it in with its' stylish and similarly awesome follow-up for a cheap overall price maybe the buying public won't care that they're missing 30 seconds of child-fucking.

With this history lesson under your belt, take note: The "2009 Remaster" of A-Kite is the 45 minute sex free Anime Works "Kite" version. It's entirely possible that they've already remastered the Uncut 51 minute version as well, but if so they're sure taking their sweet time about announcing it. I love A-Kite, I've considered buying the alternate 'International Version: Director's Edit' for the OCD collector in me that wants to own every possible edit of every film he loves, and if the remastered version is indeed a major step-up from the 10 year old transfer I'm familiar with, I shall be tempted. But if Sirabella and MB want my money, they'd better release an uncut Remaster while they're at it. If they were smart (and odds are, they were) they did restore the uncut version and simply re-edited it, but I'm afraid that only time will tell on this one.

While I won't say that the heavily edited version of A-Kite is without fans or potential enjoyment, the uncut version of A-Kite is truly something special, a gritty and over the top fusion of La Femme Nikita and Thriller: They Call Her One Eye that simply hasn't been matched in animation since. It's a sad, elegant, grotesque and brilliant experience that has all the raw moral outrage of Violence Jack: Evil Town with a sense of jazz noodling and smoking streets style that, I'm sorry to say, Itano could never outclass in his prime. Yes, Umetsu's been slipping as of late, between Mezzo TV blowing its' budget completely by episode 3, and Kite Liberator being one long winded joke that wasn't actually funny, but there's nothing - NOTHING! - that will ever detract from the delirious levels of pulp perfection that ooze from the bullet holes left in the wake of both A-Kite and Mezzo Forte.

Now come on, Columbia. Make with the Urotsukidoji HD Remaster. I know you want to...
at 9:07 PM