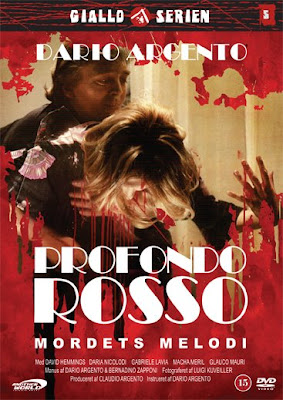 Well... it's still a fuck of a lot better than the old R1 corpse cover.
Another World Entertainment (AWE) caught my eye ages ago by releasing films I've usually already seen, but don't particularly want to pay for (again, in some cases) in spectacular and oft-definitive special edition presentations. Their discs also sell for under $25 on average, which for a Euro import is nearly criminal. Despite being a Norwegian based distributor, their focus on Italian cult cinema - most of which was made with an "International" market in mind - would inevitably mean that plenty of their releases would be English friendly by their very nature. While AWE has yet to create their own original telecine, they're not above splicing multiple masters together to create the best presentation they can, and their attention to small details mean that their presentations are essentially made specifically to please anal-retentive fans who just want to have one edition of any given title sitting on their shelf.

They're just like me! Well, except they make money at it...

It seems they've done it again... almost. As most of you may know by now, Profondo Rosso is plagued with all sorts of frustrating nonsense when it comes to watching the complete, unedited version of the film. The whole story can be read here, but the short of it is that Anchor Bay created their own standard-definition remaster a decade ago, and the Italians who own the picture have so far been too cheap to make their own transfer, so every single DVD release of the film worth mentioning have been based on the Anchor Bay NTSC tape. It isn't an awful disc, but it is primitive, and a new HD restoration is simply too expensive for any of the current rights holder to undertake. Besides, Italy decided to do their own HD remaster of SUSPIRIA and that didn't go so well... anyway, rather than make a brand new transfer, the Italian DVD includes the original Italian credits on the US transfer (an NTSC-PAL conversion), and used a video processing based restoration, which combines DVNR with color correction to fix the ancient master up as best they can.

Yes, DVNR can lead to smearing and other nasty problems, but the English credits freeze over the original ending sequence and the video on the Anchor Bay DVD was never top notch, and the transfer is from a grainer Interpositive rather than from the Original Camera Negative, so at this point we're really just trading one set of problems for another. The US transfer also supposedly has more Edge Enhancement, but since the Italian version is converted from the US transfer I don't see how that can be entirely true. The Italian audio has also been overhauled and even given a 5.1 mix, and thankfully the subtitles for the many Italian-only sequences in the film have been retained. Frustratingly the "full" English subtitles for the film are not included, but as just as many performances were dubbed on the Italian track as they were on the English track it's a compromise I think I can live with, and fix myself later if I can't.

To differentiate themselves from every other release out there, extras include the shorter Export version of the film, presented in English and in full scope for the very first time on video. There's also a commentary for the full length cut, from an Argento buff by the name of Thomas Rustock, which is in English. He actually put the DVD together, and if anything this could be a winner for it. Aside from the usual trailers and stills, there's also the British TV documentary Eye for Horror focusing on Il Maestro's career, which is included on a few other Dario DVDs around the world, but I don't own it yet, so bring it!

EDIT: Damn... turns out I misread the info. While the shorter "Deep Red" cut is dubbed in English for the entire feature, the 'Version Integrale', "Profondo Rosso", has about 28 minutes of Italian dialog sequences with no English subtitles at all.

Owning the Blue Undergroudn release won't be the worst thing on the planet, and the AWE release will still have several special features that likely won't appear on any restored HD transfer, so the Norwegian DVD isn't a total coaster despite not being overly English friendly. Also, Medusa's claim to have used the MTI Digital Restoration process seems to be either completely fictitious, or merely applied to the newly transfered Italian credits, as other than being an NTSC-PAL transfer it otherwise looks 100% identical to the US transfer.
at 1:18 AM