Patches for R2 Japan versions of NINJA SCROLL (or, if you prefer, Jubei Ninpucho: The Wind Ninja Chronicles) and WICKED CITY have both been posted for some time, and are now available from the usual sources. The former looks slightly better than the R1, the latter is a dramatic upgrade, and both include exclusive special features and their Manga and Streamline dubs, respectively.

Ninja Scroll has no Japanese subtitles, and even has the English track set to the default audio when you pop it in, despite the R2 DVD being intended solely for Japanese audiences. Why would he do that? Because Kawajiri is a reverse-weaboo, my friends, and loves hearing his movies in English as if they were epic Hollywood productions, apparently. I half hope that his Highlander: The Search for Vengeance film being hacked to somewhat incomprehensible ends by authentic Hollywood producer dickheads has finally kicked him of the habit of wanting to 'go Hollywood' so he can get back to appealing to a Japanese audience more than a generic international one, but since the last supposed bit of news involved him either adapting another Kikuchi novel or dusting off the script for Ninja Scroll 2, I guess only time will tell what my boy has up his sleeve next.

I also patched the GHOST IN THE SHELL FINAL EDITION R2 Japan DVD as a celebration, of sorts, to commemorate the release of Ghost in the Shell 2.0 on home video. What I mean by this, of course, is that I patched the R2 as fast as I could so that my thunder wouldn't totally get eaten by the 2.0 release. Hey, I have to keep up my share ratio somehow...

The GITS "Final Edition" actually has both the Manga English dub (in its' original stereo mix) and English subtitles, but... they aren't subtitles. They're dubtitles, so they pop up when nobody's talking and don't have a particularly literal bend to them like the official R1 translation does. If that sort of thing gets on your nerves, you can now be spared without having to listen to Manga's bullshit DTS upmixes or their constantly artifacting interlaced transfer on the Special Edition. Only downside is that I got lazy and didn't subtitle the special features, but as the Production Report was actually dubbed in English for the US release... well, dubtitling that and then editing it back to the Japanese version is just more work than I'm prepared to do for a 30 minute making-of for a film I've only kinda' recently fallen in love with. Maybe next time.

In other supposed news, Kentai Films continues translating bit parts for films not directly released by yours truly. One of them I actually did the VHS restoration for - LADY CHATTERLEY IN TOKYO (you know, the one with the horse junk) - so while the bulk of the translation came from a subtitled Italian VHS, carefully translated back into English, there were a lot of spots that didn't quite gel from one language to the next. So I wound up translating a substantial number of scenes in the hopes that, between me and Italy, the entire film will make sense. 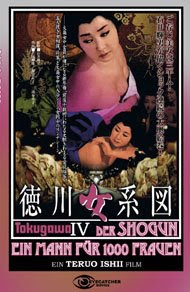 The other new project is one I don't feel I should take any real credit for, but I'll mention it, since it'll be of interest to some of you. Teruo ISHII's original Tokugawa era Pinky Violence picture, TOKUGAWA ONNA KIEZU, was one of (if not the?) first sex film set in the Shogun's Harem. Unfortunately if you fell in love with the man for his zany antics in stuff like Inferno of Torture or Horrors of Malformed Men, you might be disappointed, as this is a strict 'Dorama' that happens to involve boobs and infidelity along with bad bald-cap wigs and gorgeous period sets. If you're into period dry humping, you'll be in for a treat. If not... well, I've got plenty of non-dry hump themed projects coming up in the near future.

The translation on this one isn't totally literal, and not without good reason: much like Lady Chatterley in Tokyo, the translation was taken from the German dubtitles on the recent DVD, translated back into English. Vintage German dubs are all over the place, with some being more or less identical and others being totally re-written to the point where you wonder if the people behind the process even had a script to work from. Tokugawa Onna Kiezu was actually pretty close, but like all dubs it had some rough spots, and my job was to listen to the Japanese track and make a subtitle that made sense. This was trickier than usual, since the German script was already just different enough that I had to first translate the scene, and then word it in a way that made sense with the rest of the Gerglish translation. Hopefully my stuff will sneak in with the rest of it so well that no-one will even know I was there.

And I'm out until Baby Jesus knows when.

Informational Bonus! Despite predating the entirety of Ishii's Joy of Torture/Tokugawa series, German distributor Eyecatcher has decided to release "Der Shogun: Ein Mann fur 1000 Frauen" under the title TOKUGAWA IV. Also, I have absolutely no clue what film "Tokugawa: Das Fraudenhouse von Nagasaki" is, or if there was ever supposed to be a number on the end of that... but I guess I haven't looked very hard, either.
at 3:57 AM