Yamato Video Is A No Go

Got word today that the new release of KEN IL GUERRIERO - IL FILM from Yamoto Video is the same more-censored version available in France, Korea, Japan and (formerly) the United Sates and Germany. He also says the quality is awful, so likely it's the same ancient LD era master released in Korea, but with the added bonus of being converted into PAL... basically, it's the old French DVD but with an Italian dub instead. Disappointing.

Not to worry, though. With the help of the FistOfTheNorthStar.it webmaster - nice guy I might add - I've ordered the Dynamic VHS for the low price of 11 Euros, plus God knows how much to ship it to the United States of Economic Stupidity (still waiting to hear on that front... damn you, eBay!). I won't be able to watch it without any PAL equipment, but at least I'll be able to send it off to Video Screams so they can make a PAL DVD-R out of it, or, something. Meh, details. I'll soon have partially uncensored Hokuto no Ken in the best quality available, and in the end, that's all that REALLY matters.

In happier news, censored or not the Toei HD Remaster DVD is definitely the one to own. Other than the 5 minutes of censored footage and a niggle I'll get to in a second, the HD restoration is delicious, and since I love y'all I took some caps to prove it: 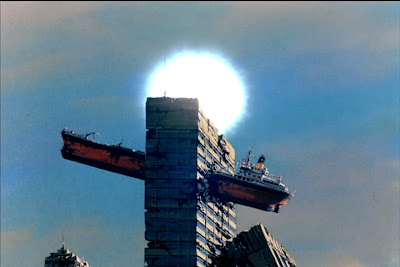 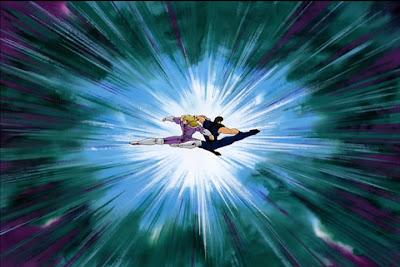 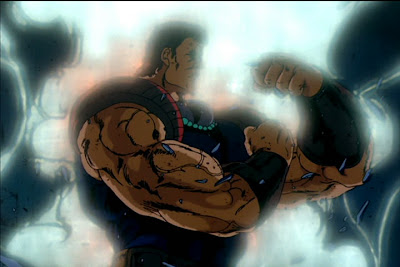 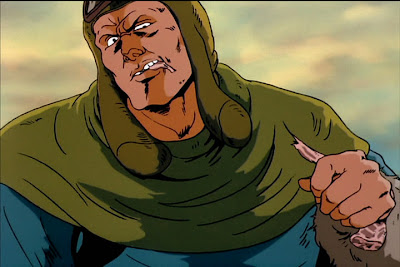 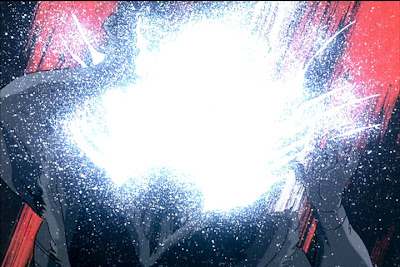 The new transfer does have a touch of EE, but it's not as bad as 95% of the DVDs on the planet that do, and the bitrate of 6.39 Mbps is adequate (if not impressive). It pushes the R1 and R3 options off the swing and makes them eat dirt, and the PAL versions are all out by default, save for that new French DVD, which is more likely than not a PAL conversion from the same Toei restoration. The only flaw compared to the R1 transfer is slightly overblown contrast, which only really affects scenes that are blown out anyway... here's an example, R1 on top, R2 middle, R3 bottom: 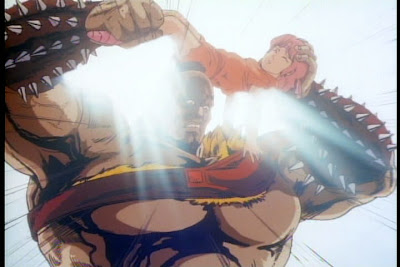 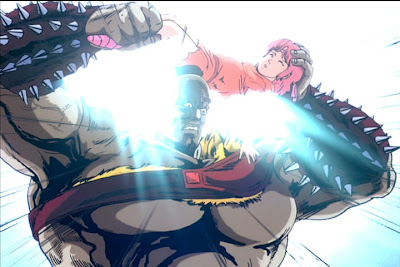 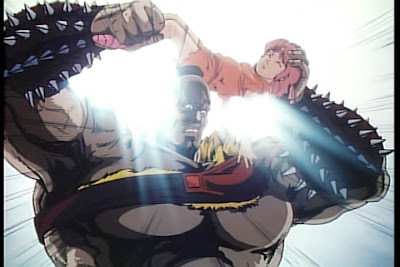 Having color corrected a few things now I know how tempting it is to just crank up the contrast so stuff you think should be white is white, but this is exactly why you should NOT crank up the contrast without finding the brightest scene in the film and then correcting it so that it reaches 235 white. Blowouts aren't frequent in the film, but as you can see, they aren't pretty either.

For extras, the "Original" theatrical ending is included with both Japanese and English audio options (but no subtitles in any language), the uncensored theatrical trailer we all know and love in 4:3, a 5 minute "Promo" film that's basically an extra long and music free trailer, and most surprising was a teaser trailer that probably served as a TV spot, featuring totally original animation using theatrical framerates and TV character designs. It also has this... thing. 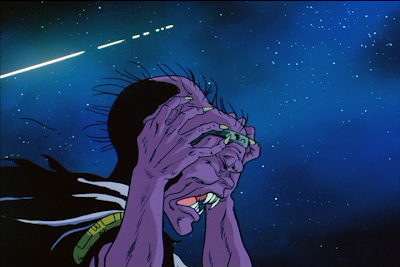 Looks like Ashida lost track of a Vampire Hunter D villain... seriously, WTF IS THAT?!
The lack of uncensored footage is frustrating, and the transfer is a notch or two below perfection, but overall it's without a doubt the most complete, and best quality version of Hokuto no Ken Gekijou-ban that there's ever been, and likely the HD master when ported to Blu-ray will be the best version of the film there will ever be. It's entirely possible that Toei will see the error of their ways and then do a new transfer... but it's also possible that Manga Entertainment will offer a heartfelt apology for every retarded thing they ever did to anime, and Andy Farin will commit seppuku at the New York Anime Fest to atone for Devilman's ham-fisted English dub. This doesn't mean I expect either to happen.

P.S. - Turns out $31.99 is the total cost to send that Italian tape my way. Still cost me less than the limited edition R2 DVD, so I'm not going to complain.

Speaking of which, the "Multi Ending" feature (ie: the original theatrical ending), English dub, and booklet are all considered first press bonuses on the Hokuto no Ken HD remaster DVD, so if you want any of those, hop to it!
at 12:15 AM

Co-founder of Manga Entertainment, who decided selling Japanese animation to the UK was his calling after seeing AKIRA blew his mind.

They never would respond to my emails regarding being bitten three times from purchasing their UK Akira DVD's. Each time hoping they had finally put the English subtitles on instead of just the hard of hearing ones.

The things these companies get wrong aren't hard to do right, a kin to pressing buttons and checking the results, they just don't seem to care about the results much.