It's been a frustrating week. I feel like ass, all fever and weakness, that weird cold that doesn't make with the mucus but still hits you like a vampire sucked all the enthusiasm right out of you. My new Cinematik membership isn't half as useful as I'd like it to be (a thousand great torrents with ONE seed each? Oh,! come on...), though it's still slightly more attractive than premium Usenet access, so I'm going to try to work it. I also finished unlocking everything even marginally important in DBZ: Burst Limit and now wish I'd spent that money on something else. I know I have terrible taste in video games and may not have picked anything better, but sometimes I'm excited to play even a mediocre game through more than once. At least the online feature might redeem it, once I can get it to work without lagging so badly that I can't even tell if it was me or that other guy who landed the goddamn fireball first...

To top it all off, a project that's ready to go, right frickin' now, will not behave and accept the subtitles as-is, seemingly due to some horribly wonky coding used on the original DVD. I'm going to have to rip the video/audio files out and create a new DVD from scratch using the original streams, and - assuming I want to, of course - create a new menu from scratch, too. Wouldn't be the first time I've literally had to do it, and odds are it won't be the last, but it's always frustrating as hell when I need to turn what by all rights should be a simple, easy project into a ridiculously complex one... 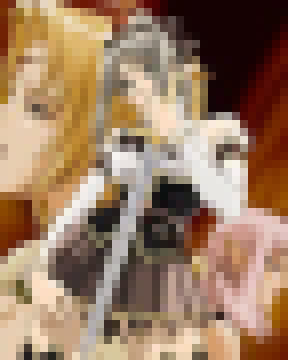 Heavily pixelated preview. Trust me on this, it's an appropriate clue.
Speaking of ridiculously complex, the chapter stops on this DVD are absolutely mind-boggling. It's a 30 minute OVA, and it has 29 chapter stops! Only 9 of them are actually selectable from the main menu, an oddity that I kinda' like from a design standpoint, giving viewers more flexibility during the program itself than they would have from the basic menu structure, but adding each of those manually is still going to suck harder than anything has ever sucked before. Also, considering the content I can understand fans wanting to jump to a "specific" scene again and again, but still, give me a break...

It's not all bad though, as I'll be able to put two episodes on the same disc, and they happen to be the two 4:3 episodes, leaving me free to put the two 16:9 episodes on a second disc. Also, if I have English menus to start with it could be a "For Sale" version without any additional work later. Just, uh, plenty of work now.

Finally got an RA, so I'll be trying one last video capture device once my refund has been processed and I can try a slightly more high-end model that, in a pathetic stroke of irony, won't even have audio ports. I'd better work this time though, since I literally have a whole box of vintage anime LDs that arrived the other day, demanding to be transfered to DVD. I'd love to oblige them, but I'd rather not have to use the Lite-On in the process.

General updates on my non-Kentai projects are as follows:

Got an eMail out of the blue from my semi-regular (and licensed!) employer. It included a fully translated script for our next project - which neither I, nor I'm sure 99% of the world that doesn't usually watch underground Euro splatter - had ever heard of. It's even timed?! Groovy! Looks like all I have to do is play Grammar Nazi and shift them around until everything fits. Only potenial hang-up is that it's for the PAL release of the film, but being a project released direct-to-video I have no clue if it'll be an interlaced PAL>NTSC conversion (in which case the timecode is still good), of if it'll be a proper progressive PAL to progressive NTSC conversion (in which case I need to slow the subtitles down by about 4%). I've actually dealt with both situations before - sometimes even on the same DVD! - so only time will tell what complex means I may have to resort to.

The second is a project that, frustratingly, I don't get paid in cash for*. Still, I get to be a part of something that I love beyond sane and reasonable measure, and I've already been able to donate two special features towards the project, so the fact that I'm working for free crap as a sort of archivist/consultant is no skin off of my ass. All the same, what I'm actually doing for the project is something that's generally out of my comfort zone... not something I'm totally unfamiliar with, just something I've never done professionally. Or, not what I'd consider professionally.

Still, it's a foot in the door, and when the DVD is finished it should be the definitive edition of this particular film. Unless, of course, the content owners over at **** decide that we can't keep some of the special features I provided. I'll be quite disappointed if that turns out to be the case, but since they own it, lock stock and smoking crater, there won't be a lot we could do to argue with them.

*I'm more than willing to whore myself for face time with legitimate labels. Just the kind of slut I am. All the same, to mis-quote The Joker, "If you're good at something you shouldn't ever do it for free". So hopefully this will go well and lead to more legit work doing... um, it? Yeah. It.

I'll clue you in on the details eventually, in that circular and incoherent way that I'm so fond of.
at 1:37 AM