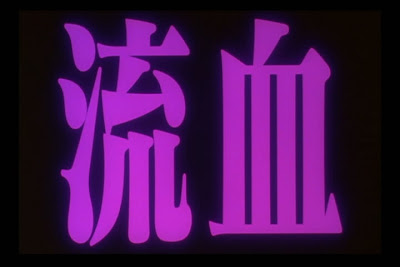 I've decided to finally do the inevitable and add English subtitles to my NEON GENESIS EVANGELION: THE FEATURE FILM DTS COLLECTOR'S EDITION R2 DVD set. The Manga translation found on the R1 DVD always struck me as serviceable enough that I figured, with some minor edits for software use, I could drop the translation into the R2 DVDs and be done with it. Bada bing, have a glass of lemonade, everyone's stoked. Right?

The above is one of roughly 50 untranslated slates I've found in the first half of EVANGELION: DEATH. If you've never seen the film, basically these flash up for between 3 and 10 frames a piece - a fraction of a second - detailing either the technical specifications of the EVA hardware or the core thought going through the pilot's mind at the time. It literally assaults the viewer with this information the same way that IKARI Shinji is assaulted by Saichel, the Second Prohpet. It may seem a bit heavy handed to literally bury the viewer in a wall of text, but under the circumstances in both presenting the mental state of the pilots, and creating a divide in the simplicity of Death with the complexity of THE END OF NEON GENESIS EVANGELION, I think it was a stroke of mad genius. (Much like the rest of the show.)

Unfortunately, I'm now left with that wall of kanji and the choice to either leave it alone, or to trudge onward with my limited understanding and waning patience, translating all of it for the first time. A part of me says "fuck it, Manga and Gainax thought it was good enough". Another part of me says "come on, you know if it's not translated it'll drive you insane forever". I'll continue going through the film, marking the remaining slates as I do, and come to a descision later. In the meantime, I'll possibly patch some Pixy prawn to help my brain unwind.
at 9:49 PM

Since Death is essentially a rehash of the series, maybe somewhere in ADV's subs you can find the translation to those slates.

Ah, if only it were that simple...

The actual footage around the slates is basically a clip-show of the TV EVA battles, but the slates themselves are completely new. If it were as simple as stealing the R1 translation for them I'd be doing just that (instead of sitting here bitching about it).

I can always just take screenshots and let someone else translate it all for a small fee, but I'll wait until I've found all of the little bastards before deciding if spending a week with a kanji dictionary glued to my hand is the better option.