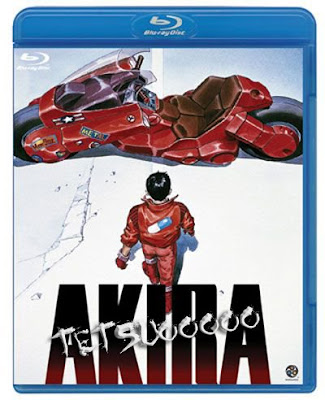 The good news is that the new Bandai Visual Blu-ray release of AKIRA is a pretty dramatic improvement over the THX approved 2001 Pioneer Special Edition DVD. Word is that the first ever 192KHz/24 bit 5.1 Dolby True HD audio track is supposed to be the sort of thing that audiophile dreams are made of, and while it's frustrating that the production galleries and vintage making-of features aren't carried onto the HD release, BV made up for this by this loss by including the entire storyboard for the film as a PiP (picture in picture) track. Also, if you get the first pressing you get a limited slipcover and a 32 page booklet. So, this release is tops, right? 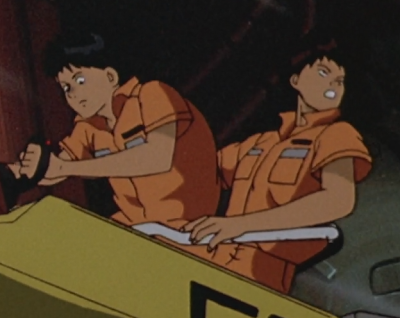 (Cropped, but otherwise untouched)
...what the hell is this, Bandai Visual? Did you actually smear vaseline on the film print, or is this just some overly heinous post-production tinkering?


To review, this is (give or take) what the average 35mm sourced animated film should look like when properly transferred to Blu-ray. To play it fair, I'll use only Bandai Visual transfers, sourced from 35mm, and made within a decade of Akira: 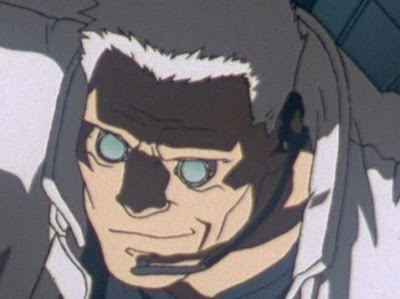 Overly grainy due to the half-digital/half-analog origins of the film, and just a tiny bit of edge enhancement, but overall not bad. 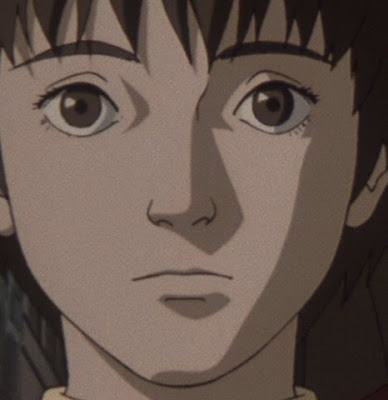 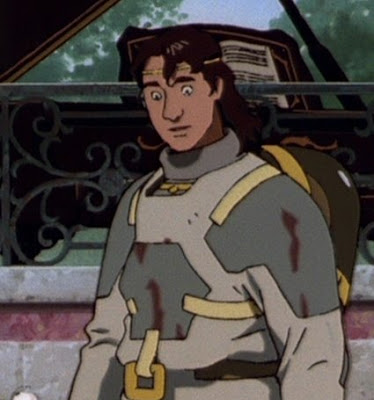 Methinks there's just a touch of EE, but very close to looking like a projected film print on my monitor. Approved! 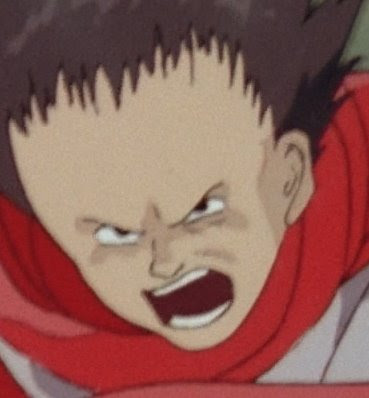 The outlines being 'smeared' is a dead give away that this was manipulated through some form of digital noise reduction, since had the shot simply been out of focus (which is nearly impossible on an animation stand) the entire shot would be out of focus. As you can see, some outlines are more defined than others, but none of them are especially sharp. The fact that the grain is rather "clumpy" - as opposed to the fine dots in the above examples - is another tell-tale sign that something oogy and unrelated to film is going on in this shot.

I'll grant that the Blu-ray is a HUGE improvement over the THX approved Pioneer special edition DVD from 2001, and to play fair I'll show just how vast that improvement is by example: 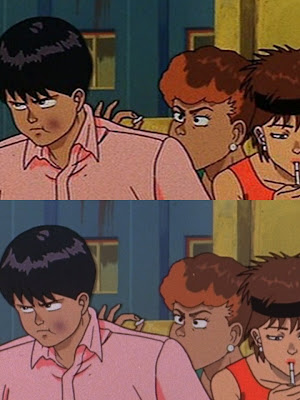 
Unfortunately, even this night and day example shows something very odd. See the lines around both the girl's eyes, forming (for example) the top eyelid on the girl lighting up her smoke? They're nice and sharp on the DVD, yet smeared and blotchy on the Blu-ray. Since the "new" Blu-ray and the "old" DVD are both taken from the same 2001 1080i HD remaster - absolutely nothing Bandai Visual, nor anyone else says will convince me otherwise - that means that these lines ARE present on the HD master and the DVD, but not the BD. This is totally redundant: why does the NTSC 480i transfer have detail visible that are difficult to see on the HD 1080p transfer? How is that even possible?

There could be several reasons for this, including deinterlacing oddities or massive compression failure, neither of which are out of the realm of plausibility. Of course, those would be some weird-ass deinterlacing errors, and since other lines are sharper on the HD transfer... well, like I said, it's possible but not very likely.

My current guess is that the HD transfer itself doesn't have any NR, but NR was added to the HD transfer for the Blu-ray release. The question is, why? One simple theory is that someone at BV thought that the transfer looked "too grainy", and tried to "remaster" it. If this seemingly plausible scenario is indeed true, I'm hoping this person was forced to commit seppuku before his entire extended family with a plastic spork. The other possibility is that there was no way to cram on the 2+ hour feature with its' MASSIVE audio requirements, and NR was found to be a better alternative than heavy compression artifacts. This is usually only done when dealing with ridiculously low bitrates, and compressionists have different tools to aide in compression (like vertical filtering and quant values) to ease artifacts without turning all solid textures into jell-o, so I can't help but think that wasn't the case either. Still, it's bizarre as hell, and troubling that, while the Blu-ray certainly doesn't look awful, it clearly doesn't look as good as it could (or should) either.

If you're a big Akira fan, and you care about audio/video, this release is the nicest version out there by a long shot. I've taken some of the worst looking images out there for this comparison, and you can see more for yourself HERE from a reviewer who's just a bit more enthused about the whole thing than I am. The part of me that grew up watching Streamline anime titles from the early 90s wants this disc, and wants it BAD... yet the part of me that holds the checkbook looks at these images and thinks, $50 MSRP? Are they insane?!

This transfer isn't totally appalling, based on these screenshots. It's nowhere near as awful as FUNimation's promo disc of Drabonball Z I moaned about a while back, and while the old chestnut that "it looks better in motion" is just an apologists knee-jerk, I'm sure that when you're not trying to be overly analytical it won't jump out and strangle you with its' badness. The transfer is probably a 7 or an 8, but Akira is such an important and visually arresting film that it deserves to be no less than a 10. This is as much a frustrated plea for a better release of every title out there (because every film, no matter how shitty, deserves a nice Blu-ray) as it is for one of the very few titles that I really, really, really had high hopes for in High Definition. I'm not re-buying every movie I own, but you bet your ass that Akira was high up on that list.

I already own Akira on both Laserdisc and Blu-ray, and for the $35 this would set me back at Deep Discount I could get 3 or 4 DVDs, or 2 less insanely priced Blu-ray titles. Had this been more reasonably priced I wouldn't be so grumpy about the whole thing, but the fact that the first press includes an exclusive booklet and slipcover means that I need to make my decision fast... unless, of course, they never sell out of that first press thanks to the high price. Honestly, if Bandai Visual has ever sold out of anything I'd be amazed.
at 2:13 AM

I'm the guy that reviewed it.

Normally I'm loathe to say 'looks better in motion' because it does sound like a load of crap, but there are rare cases when it applies.

The scene of Tetsuo that's all sorta...clammy, for example. That appears to be a 'zoom in' to the actual animation frame itself.

Also, I'm pretty sure this isn't sources from the same print that Pioneer's was. Pioneer remastered it themselves, and a few places that Pioneers has dirt or junk this one doesn't and vice versa.

I gave it an A- because there are obvious flaws, but nothing that really effects watchability or enjoyability other than a few seconds. If it wasn't older, I probably would have given it a B, but even as someone who deeply cares about video quality, it's animation from 20 years ago, and looks far better than it ever has before.

also, storyboards aren't a picture in picture track, they are an extra with left/right buttons to switch between.

Darn, I was hoping this would've turned out better. The cheapest place to get it so far is dvd pacific for $28.49 on pre-order.

Keep in mind that RightStuf/Nozomi fixed film damage on TO HEART, when all they had to work with was a composite tape. It could even be that BV used the same telecine, but the clean-up was done later in both instances, so each transfer manage to fix different film damage.

It's quite easy to fix film damage in post, as well as color correct, IVTC and add noise reduction and/or edge enhancement (or, as we see here, both). You'd be amazed how drastically different two transfers taken from the same Digibeta can look on DVD, depending on how much effort was put into the final presentation.

Sure, it is easier to see flaws on a still frame sitting close to a computer monitor than it is under "normal" viewing circumstances. But that doesn't mean the flaws aren't there, and once you notice them once, you'll notice them every time they crop up. Akira looks dramatically better on Blu-ray than it does DVD, but that doesn't mean it's the deluxe and reference level transfer that the $50 price tag deserves.

I'm glad you like the disc, and I'm sure plenty of people will be thrilled with it, but I'm going to remain disappointed until Bandai Visual releases a version without NR and EE. I don't think that's terribly unreasonable, either.

Thanks for clearing up the storyboards presentation. Is that also how FREEDOM presented them?

Good point, though sometimes it's hard to arrive to definite conclusions