Left HD Net Broadcast, Right Blu-ray.
CLICK THE HORROR!
Well, this is interesting... just like Ghots in the Shell, the HDTV version looks substantially different than the Blu-ray release, though not for the better. The EE and compression artifacts on the HD Net broadcast are pretty heinous, and this comparison does manage to accurately show off just how fugly the HDTV version is. Not that most HDTV broadcasts are very good, but this one is particularly wretch-worthy. The HD Net transfer is cropped on the right side, just like the DVD.

Just to be fair, I decided to pull out the Pioneer SE and compare the utterly awful shot of Kaneda's face getting smeared into NR oblivion looked on the NTSC transfer: 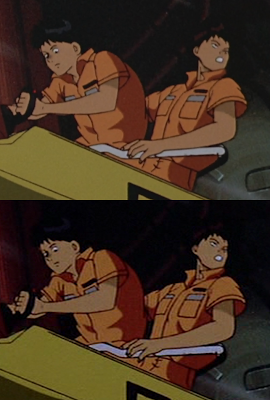 Same eroded outlines on Kaneda's chin? Same weird clumpy pattern on the shadow on Kei's arm? I do believe we have a match. This only solidifies my guess that the transfer is from the 2001 1080i HD remaster, and when you consider that Pioneer reportedly spend about a million dollars on that THX approved transfer, why would they bother doing it over again?

Still, Bandai Visual has this to say (in Japnese) regarding their "world-wide" Blu-ray release:

Keep in mind, however, that these are the same jackasses who once said of a 480i upscale:

Digitally remastered in HD to bring out the intricate details of the original that was previously unattainable!

So, wither or not this "New Telecine" line means squat is worth anything is debatable. Either way, I give up. If Bandai Visual says this is 'good enough', and it gets excellent video reviews from professional critics, the fact that the transfer has been needlessly filtered evidently only bothers me and a half-dozen other videophile snobs the world over. It's humbling, but not all together surprising.

So, fuck it. Back to my anal-retentive analog video restoration projects. Wanna' see my next challenge? 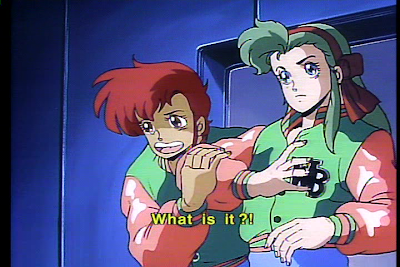