...is not how much an XviD download of 赤い光弾ジリオン 歌姫夜曲/RED PHOTON ZILLION: BURNING NIGHT OAV will cost you. In fact, it's free! Just go HERE and download away! 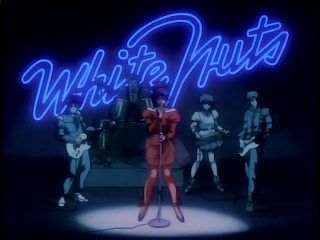 Well, at least they aren't the Blue Balls...
The video bitrate is a one-pass real time VBR 1500 kbps, 128 kbps MP3 audio. The transfer has been filtered to hell and back, but the LD was pretty noisy to begin with, so A/Bing the "new" encode and the original DVD left me feeling pretty satisfied... by which I mostly mean disappointed in the former. XviD at 1/6 the bitrate of DVD looks passable, but far from good, so while this download will certainly be better than watching it on YouTube or, whatever, don't go in expecting miracles. You'll generally have to pay for those.

The 3:2 pulldown was shot, which isn't shocking on a 20+ year old LD transfer, so I had to deinterlace the whole thing. It's a shame, but not owning the negative there's not much else I can do. I also boosted the gamma, but found the black and white points to be tolerable. 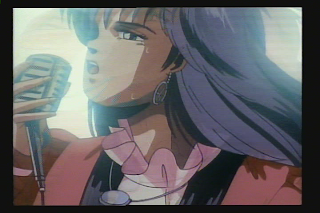 Dang it...
Having seen the analog input vs using the DV-IN, I've decided that there are worse things than crushed 4:1:1 colorspace, like the built in analog tuner filters that do little more than fade colors and add noise. Using the firewire port on my Lite-On recorder means I bypass all of the filters built into the tuner, which means I could skip bullshit like this completely! Of course, a new DV converter box will set me back about $200, which is about as much as the damn recorder cost me, so it'll be a short while before I get back to 'serious' video restoration. At least owning something like this will give me a chance to capture video without dropping frames... but wait, DV isn't natively recognized by AVISynth. Oh, this will be fun.

While neither freebies nor low bitrate MPEG-4 downloads are generally my style, it so happens that a friend of mine just finished the Zillion TV series, and never having watched the LD of the OAV that he's having me hold on to, he asked if I could encode something downloadable, just so he could see it. I'd have felt like quite the fantastic ass if I said "no", and thus, here we are. But why should he and I be the only ones who get to watch 21 year old OAV insanity? 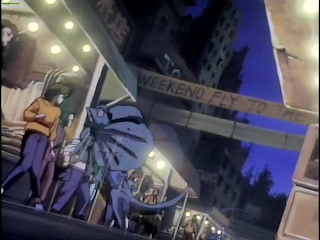 The All State Frilled Lizard wants you to know that Geico isn't as cheap as you think it is.
The production behind Burning Night is certainly a strange one. Zillion was an original TV series created by Tatsunoko Pro, the studio that's produced everything from Speed Racer to Karas, and while the original series is about humanity defending the planet from an alien race who require Earth to survive, and fend them off with magical God created laser guns that can do anything the script requires. Seems logical enough for a 1987 TV show primarily designed to sell video games.

The OAV decided to stuff all that crap, and turn the cast into a cheesy rock band. What can I say? It was the 80s, after all. 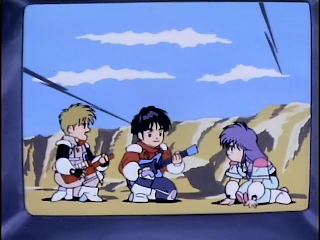 Daw, it's soo cute... now go buy the trading figures.
The "plot" is as inconsequential as can be, with the cute idol singer Apple having been kidnapped by a psycho bitch who plans to marry her off to her ugly failure of a rapist son (voiced by every fangirl's hero Kaneto SHIOZAWA!), and both J-J and Champ, heroes of the original continuity, have to get their singer back. The cast also appears in CB form, having apparently sold their licenses to a children's TV program that pits them against the alien invaders, only instead of guns the super deformed band members use the power of J-Pop to defeat them. Oh, did I mention that the villains have a traitor in their midsts who's such a wanker he wears sunglasses in the unlit barb-wire covered hidden fortress?

I won't second guess the logic behind this, but Burning Night wasn't included on the remastered Japanese DVD box set released in 2004. The credits were clearly video generated, so for all I know they simply couldn't find the negative/didn't want to bother restoring it. Or maybe Tatsunoko realized how retarded the whole thing was and disavowed all knowledge. Still, not releasing it means they're not making money off of it, which means I have zero issue with giving it away for the world to enjoy. Heck, Tatsunoko sure isn't doing it.

The only non-Japanese release I'm aware of is the dubbed Streamline tape, which I actually own and is hidden in a closet somewhere, so a bi-lingual special edition could happen someday, assuming both I and my Zillion translating buddy ever give enough of a damn (and God help us, he probably will). Streamline released episodes 1-5 out of 31 under their ancient "Video Comics" line, but unlike Nadia, no other US studio ever liked it enough to finish what Macek had started. 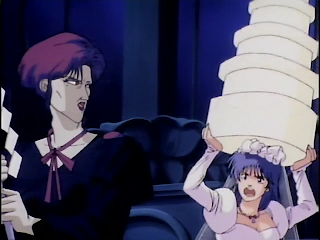 I'm officially out of witty captions today. Cake, lying, you figure it out.
at 8:28 PM

"Still, not releasing it means they're not making money off of it, which means I have zero"

-Sounds like you meant to write more here but forgot to end the sentence.

Good eye. That'll teach me to multi-task. I'll finish that thought and then I'll just-

I can't even remember if Burning Night mentions the name 'Maris' or not. Still, you're right.