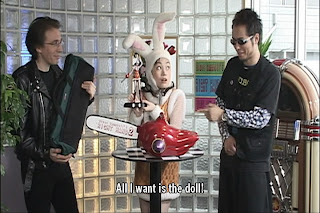 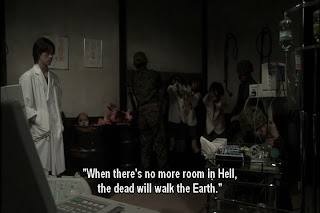 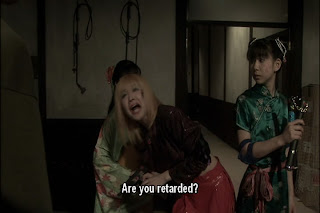 While there isn't technically anything 'wrong' with the Synapse release of the extreme zombie comedy STACY, Japan got a spiffy 15 minute making-of that we Yanks did not. So, yes, I am vain enough that I'd patch it out of spite to the licensors sitting on a few inconsequential interviews.

I also found the subtitles to be a bloody mess - and no, not in the good way. Not even the trying to be funny way that made me forgive the "Snoop Froggy Frog" and bondage-mayo-sex jokes in the GUINEAPIG: DEVIL DOCTOR WOMAN R1 subtitles. They're just... Engrish crap, honestly. I fixed the 700 or so lines up as best I could without re-translating the whole film from scratch, and I had thought they were ready to go as-is!

There's still a few scenes I know aren't quite right, the fact that the accidental Kentai Fansub translation is already dramatically better than the official R1 DVD reminds me why I started this insanity in the first place... quality.

Cute film, too. Picture the ultra-gory Japanese predecessor to Shaun of the Dead, with teenage girls skipping around and giggling shortly before they turn into cannibalistic monsters who get chainsaws shoved through their skulls. It's actually somewhat better than Tomomatsu's follow up NIHOMBIE: ZOMBIE SELF-DEFENSE FORCE, but as that film includes robots, CG calamari aliens and a lengthy send-up of the Zombaby from Braindead, I can't say I didn't enjoy it. That said, I still can't fathom that this is the same guy who made Eat the School Girl...

Anyway, you all know how to get it, if'n you want it.

P.S. Crap, I think I may have made the subtitles just a bit too low on the screen. I did the same thing with Inyouchuu, but all I really would need to do to fix them is load the discs in DVD Subtitle Edit and shift both tracks up by 5-10 pixels, save it, burn it and voila - incompetence gone!

Go easy on me, I'm using a completely new subtitling method, so I'm literally learning how to ride my computer-bike all over again. I must say, the subtitle themselves look MUCH nicer than anything Subtitle Creator was capable of spitting out.
at 3:10 PM