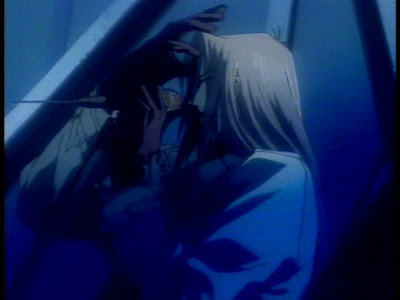 If you call Cathexis gay, you're calling Rintaro gay. Are you prepared to do that?
Blatantly homosexual or not*, Madhouse's ode to Minami OZAKI's fictional rock star, cathexis: BRONZE - KOJI NANJO, is a much nicer source disc to start with than the terrors of Wanna Be's. No ghosting, no on-disc moire patterns, no waves of random and hideous distorted signal noise constantly wiggling in and out... ugh. May we never mention that transfer again, and may Sony finally drag it out and remaster it so that we can relive the insanity of girl pro-wrestlers fighting mutants in quality that doesn't look like the fattest part of my backside.

Unfortunately, I'm not out of the woods yet. While this transfer is much, much less fugly, I'm experiencing a strange sort of constant-moire pattern, and worse yet, some really horrific chroma noise. As a test sample I've grabbed one of the stills from the very end of the LD, which - being nothing but 30fps scans of static drawings - should be as free of noise as is humanly possible. 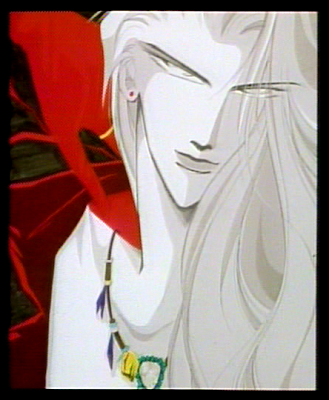 That glove is probably supposed to be one solid color.
(And yeah, I'd probably fuck Koji. Don't give me that look - you would too.)
The Toshiba D-KR10 is actually doing quite admirably in keeping the constant chroma noise intact, and not just turning it into chunks of nasty artifacting fuzz. That's a compliment I wish I didn't have to give, though. So, the question is why is there so much chroma noise in the first place? I think that having had a high end VCR for so long has spoiled me, and made me assume that composite analog video formats can be free of high frequency garbage. The fact is, despite what bearded aging videophiles will tell you, LDs aren't pretty. Yes, they were better than VHS and broadcast, but even a competent DVD taken from the same composite master has the potential to look substantially better than an LD, in no small part due to the unpredictable nature of the LD players' analog decoders, and the utter lack of error correction that leads to all sorts of nasty dropouts that DVDs simply aren't prone to, unless you're smearing them with peanut butter or, something.

Later "Elite" Pioneer players had built-in noise reduction capabilities to get rid of the nasty crap we're seeing in those crawling reds and blues. I'm currently running a CLD-V2600, which evidently was used primarily by schools and businesses for educational purposes. It has plenty of unique bells and whilstes, including a headphone jack and a cable to be controlled by a DOS based computer - come on, man, in was 1993! - and most strangely, a port to be used by... wait for it... a bar code reader. Awesome! But, no built-in noise reduction. Damn...

Looking over spec sheets from LD players made in the years gone by, it appears that only the super-high end models - as in the kind retailing for $1,000 and up - ever had built in NR. While I can always filter in post, I'm filtering a pre-compressed DVD encode, which has not only the original noise - but has turned some of that noise into its' own less than ideal compression artifacts. (Not that I haven't been over this before.) Ideally, I'd filter the noise from the player itself, and that would lead to not only less chroma noise in the DVD, but fewer visible compression artifacts as a
bonus. Of course, doing that via hardware would require either a new super-amazing LD player, or I could just buy the middle man and get something like the Algolith Flea, a box that performs NR in real-time, from any source, to any source. Of course, they don't make them anymore and they cost well over a grand new. And if I had a thousand dollars on hand, why the hell wouldn't I just buy the better LD player?

Users of the V2600 on VideoHelp.com seem positive, so either what I'm seeing is a natural product of the LDs themselves (likely), or my player has recently gone horribly out of whack. I guess the latter isn't impossible, but as the only repair place in town is a horrifying little chop-shop, I'm just going to keep using that poor old girl until she won't open her tray up anymore.

While I'm not completely zomg! blown away by the quality I'm getting from my LD recordings, I know damn well that they're a step up from the excessive noise and temporal dot crawl that I was getting prior. It's more that the closer to perfection I get, the more I realize that perfection just isn't all it's cracked up to be.

Ah, well. Noisy or not, Cathexis is one of the best looking transfers I've made in the last 2 years, so I can't say I'm not happy. There will be more LDs transfered, I can assure you of that, and I'm finally satisfied enough that I'm willing to burn them to DVD and call it a day.

*In retrospect, an anime about professional wrestling girls who use their ring skills to defend each other from a throbbing, dripping, veiny purple monster is probably much more gay than two men kissing. In the same way that PREDATOR is much more a gay film than CRUISING despite lacking the sodomy.
at 6:28 AM

Hi readers
Do not miss your chance to get a free ipad. Visit http://bit.ly/cmmVr7