Composite vs S-Video: ROUND 2, FIGHT!! 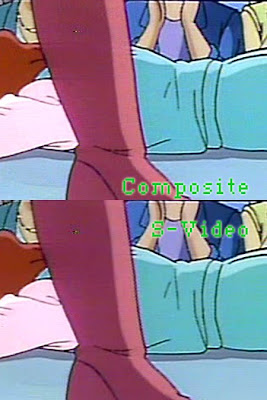 Ignore the severe compression artifacts for now.
After some really awful experiences with the Lite-On's comb filter, I wasn't looking forward to see what would happen when I switched to composite cables on the new Toshiba recorder. Yet as you can see, the dot-crawl on either side of the show's simple black outlines have basically disappeared, and the outlines themselves look no better or worse in terms of rainbowing. The colors also look washed-out via S-Video,

Throwing this particular frame out of whack is the fact that these two encodes have different GOPs, which means that 'Frame X' on the first encode is less compressed on one transfer than it is the other. As proof that the composite connection isn't leading to this level of damning noise: 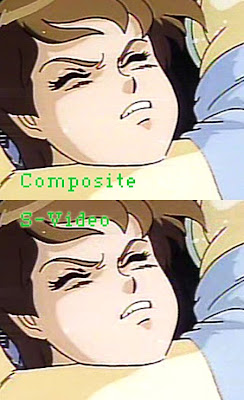 Sure, both of these shots look kinda "blah", but at least one isn't dramatically better than the other. In this shot there's less rainbowing on the composite shot, though interestingly her left brow looks worse via composite, while her right looks better via S-Video. Still, largely the composite connection is giving me fewer rainbows, and not at a dramatic increase of noise or other notable artifacts. 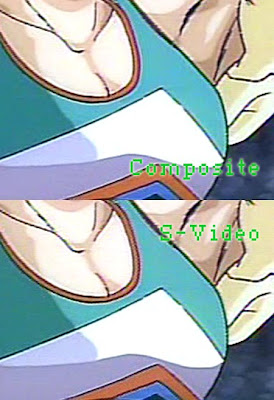 Ring around the collar, you say? Not via composite!
So, today's experiment has been quite successful. Isn't that a pleasant change of pace? I do think that composite might be enhancing noise ever so slightly, but understand that even static images on this disc are wretched noise-filled bastards from which nothing positive can ever come. As proof, have a horrifying noise-filled image of the closing color bars, which SHOULD be perfectly static and noise-free: 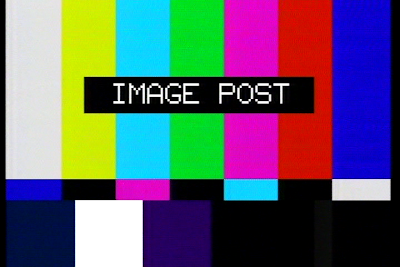 DO NOT WANT!!
Good lord, it's like watching a calibration disc vomit... I'll find my Akira LD and see if that pattern is substantially better. If so, then the player isn't to blame on this atrocimacy.
at 12:18 AM