The Old Girl Gets A Facelift: Restoring Nikkatsu's Lolita Anime

The basic steps were the same in all cases: deblock, manipulate contrast, gamma, and saturation, a heavy level of noise reduction, color correction, and finally crop out the garbage data at the bottom of the tape. No comb filtering or any other filters that often wind up in my scripts were needed, since my JVC is better at erasing rainbows than any software algorithm you can throw at it.

I can't make these progressive due to odious video editing - not all of it credits related, either - so the final encode will be that "hybrid" method in CCE SP that I loathe so goddamn much. No, it isn't ideal, but it's better than a 100% interlaced transfer, and means that these will look better than the original in terms of MPEG compression.

I typically don't like noise reduction either, and I don't think I've used any on other recent VHS restorations (like Passagen), but the bottom line is these tapes are hideous, grainy, noisy bastards in the absolute worst kind of way, and that's exactly what those filters are designed to deal with. Yes, I do see some softening in the background I'm not too fond of, it was a question of soft and noisy crap, or merely soft crap. The latter was definitely the lesser of two evils this time around.

Original is on the left, remaster is on the right: 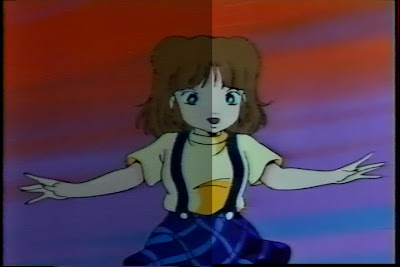 Sick Aki-chan
I really like the improved contrast/gamma, it just makes the once dark and murky picture snap to life. I had to resist the urge to crank up the saturation, just because the psychedelic nature of this episode lends itself well to glowing, vibrant colors, and other scenes are (intentionally) so under saturated that flesh just looks dead. This lack of consistency makes color-correcting a bitch, but I think I've got something that "works" in this shot, for better or worse. This particular frame looks very blue, but 3 minutes later it looks too green, so, whatever. 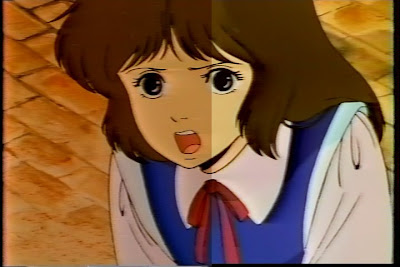 Milk Drinking Doll
This was the worst of the lot in terms of color (and bleeding outlines - yeesh!), and while I've managed to beat those overbearing reds into submission, the flesh tones still look too yellow. It might not quite ever get fixed, due to how screwed up the levels on this source are to begin with. I'm not Dr. Manhattan, try as I may... 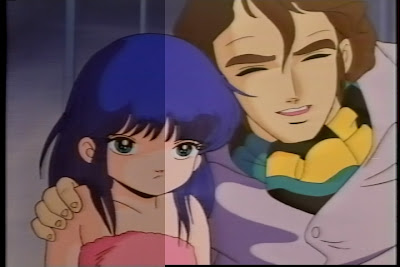 Pee Play
This one never looked too awful in terms of color, it was just too dark. It's probably hilarious that the worst looking source tape was the easiest to restore, but that's only because I can't fix the big problem on my old recording*. It's a shame I can't somehow use AVISynth to fix the jitter (vertical stability errors) on the original mechanical playback of the source tape, but, I can't.

The final DVD encodes will probably be a little different than what you see here, but I think the results have been pretty dramatic so far, and virtually all of it has been positive to boot.

*What I wouldn't do for a set of Nikkatsu Lolita Anime LDs... *sigh* Actually, is the third episode even on LD? I remember seeing the first 2 episodes for sale on the same disc, but I've yet to see an Omorashi Gokko laser on YAJ, and thus far boogle has netted me nothing. Anyone know for sure?
at 2:16 AM