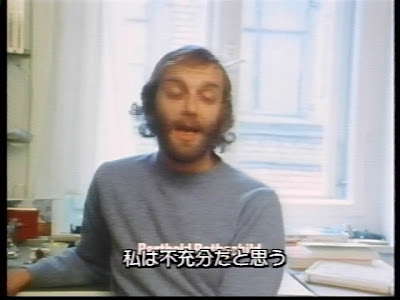 Old transfer I was more or less satisfied with. 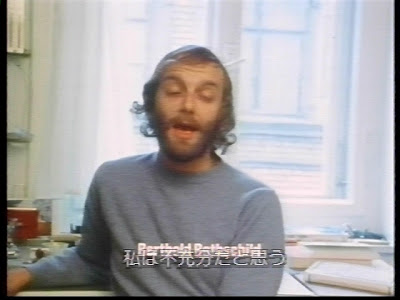 New transfer I'm even more satisfied with.
(The subtitle only looks like that for 1 frame, I promise.)


H.R. Giger's Passagen has a somewhat unique problem in terms of its' restoration. While the entire NTSC transfer has good 3:2 pulldown, and thus could be made progressive, aiding in compression (which I don't need) and video quality (which I do), the subtitles on the print are video generated, and thus are natively 30fps. If I keep the video interlaced, as in the first screencap, I have combing artifacts and need to rely on my DVD player to fix it. If I make the video progressive, I have the same problem - but, only from time to time - on the subtitles themselves. What is a twitchy amateur restoration guru to do?

Typically what you would do in this situation is let the MPEG encoder try to use a reverse 3:2 pulldown (IVTC) algorithm to create a progressive video file, defaulting only to interlaced frames when the subtitles left it no other choice. It was designed specifically for anime titles that have 30fps editing, so that you could keep the progressive and interlaced frames in the same file without needing to edit them in later. For titles that combine traditional 24fps animation with 30fps footage, either from live action material/CG material (Genocyber, Rurouni Kenshin) or occasionally dip into native 30fps digital animation (Azumanga Daioh!, Shin David no Hoshi), "hybrid" 24/30fps encoding offers a solution that, in theory, compromises absolutely nothing.

Notice the "in theory" in the above sentence? Unlike an IVTC, which converts 30fps into 24fps, you can't really do a 'hybrid' transfer manually, unless you want to pick and choose how each and every frame is stored. Passagen has nearly 90,000 of them. So I can either hand-pick what to do with each and every frame for weeks on end, or I can let my MPEG coder do the work for me. You guys know I'm OCD, but come on, I'm not retarded.

Having made a test encode last night, I found that CCE would randomly interlace frames even when the subtitles were static, or when there weren't any subtitles at all. The algorithm simply isn't very good at finding film frames, and the only 'sacrifice' I made in crafting the progressive transfer is occasional combing on the subtitles, which would have happened had I left the transfer interlaced anyway, so I'd rather be free of combing on the film footage and let the video generated subtitles my target audience (by which I mean "me and the guy who sent me the tape", mostly) can't much read anyway. If I ever go full blown crazy and subtitle this, I could just create subtitles in black boxes to cover the kanji subtitled anyway, so there will be little to no interlacing on a "finished" DVD when everything is said and done.

I kind of wish I'd done this with Giger's Alien/Giger's Necronomicon, too. Then again, I wish I'd recorded all three of them with PCM audio and via S-video to an external HDD so I didn't have to deal with two layers of MPEG artifacts, too. Doesn't mean kicking myself in the face over any of it will make a better DVD. I did have to change the deblocking filter, but using similar settings to what I had previously used as a part of MPEG2Source() I can barely tell the difference. If anything BlindPP() is preferable, because it doesn't do that freaky temporal deblocking, where the I-frame will be perfect and the P-frames will look like a VCD. I can understand why people like that, but I'd rather have slightly softened I-frames just so the whole transfer looks consistent.

For now I'm off to compare DVD Recorder specs. The Toshiba D-R400 is so far sounding like the best compromise between price and quality, offering an S-video input and Linear PCM audio recording for less than I paid for my Lite-On. It's also region free, just like my Lite-On, and offers 1080i/p upscaling, which my Lite-On does not. The only major downside is that the D-R400 doesn't convert PAL titles to NTSC, or have a built-in NTSC/ATSC TV tuner, so I'll basically have to keep my Lite-On around to play PAL DVDs in mediocre quality and potentially record anything playing on TV. Not that I ever do the latter, and I often watch PAL stuff on my PC, but that's still a potential deal killer. I could just buy a PAL<->NTSC signal converter, sure, but spending another $200 bucks on another block in my hardware chain when even a shitty $50 DVD player performs a similar function just seems like a waste.

These days I could theoretically just rip anything PAL to my HDD and then let my PS3 Media Server handle the rest, but it's still frustrating that one of the best DVD players on the planet flatly rejects any title from outside of the US. I know, I really should just buy a damn Oppo DV-981/DV-983, and then all of my region free/PAL based worries are gone. I'm not a fan of the units' subtitle bug, as the Lite-On has it too, but everything else about those two players is just too goddamn sexy to pass up forever. But I can worry about fancy playback after I have fancy recording taken care of.
at 3:02 PM