I can't believe it took 30 hours to encode this son of a bitch. I really need to make a back-up PC which does nothing but encode. It can take a week, so long as my main PC is free in the meantime. Ever tried decoding and upscaling a DVD via FFDShow while your P4 is already at 66%? The answer is "no". Or if it is "yes" you didn't do it more than once, now did you?

Anyhoo, this completely progressive and filtered to Hades and back is, without any shadow of a doubt, as good as the original MPEG file I was given is ever going to look - the Kentai Films remaster of RUN, MELOS: 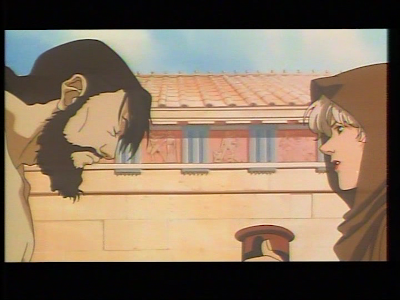 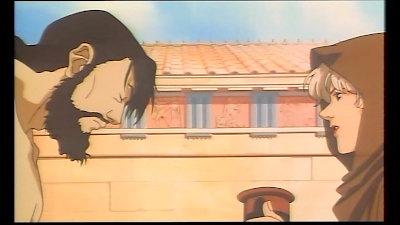 Remastered DVD-R Transfer
5200 kbps, 3-pass DVD ready encode (CCE SP), 256 kbps AC-3 (Soundforge), and more AVISynthery than any one man should ever have to ever use on a single source.
I chose this shot because it actually sums up the strengths and weaknesses of the Kentai Remaster perfectly: while the background is now kind of smudged and the saturation is slightly overblown (which is bad), the flesh tones are more lifelike, the black level and contrast are more natural, rainbows have been thoroughly beaten into submission and mosquito noise is almost a non-issue (which is good). My transfer is sadly not flawless compared to the source, and I'll be the first to admit it, but I'm still fairly proud of what I managed to craft. I was handed a steaming pile of shit, and successfully turned it into a respectable piece of crap. I'd like to see any other "legitimate" studio do better.

A word of unexpected insanity: the "Emotion" logo at the start is preserved as it was on the original encode, though it'll now be stretched to 16:9. It was animated at a jaw-dropping 30fps, so scaling it was going to destroy it one way or another. So, I did the one thing nobody expects... I didn't. Yeah, it'll look fat and hilarious, but I'm sure you'll learn to forgive me for it. I might even re-encode it later (if I can find a safe way to do it!) if it bothers me, but after having tumbled with this bastard for months, I doubt I care nearly enough to...

It's progressive, it's minimized all obvious compression and composite artifacts, it's anamorphic, and I defy anyone else to make something better and still squeeze it down to a single-layer DVD-R. I've already deleted the source files - yes, that's how committed to this version I am - and in a glorious stroke of hilarity, the guy who originally asked me to do the transfer had a friend of his make a DVD-R of it for him in the meantime. I'm not mad, I'm better than that, but I am very curious how his transfer stacks up against my own. Of course, starting fresh from the LD itself he'll have a major advantage, but unless he's crazy enough to manually IVTC the whole thing the way I did, I think I'll still have a leg up on him.

Layer upon layer of IVTC, cropping, scaling, denoising, deblocking, color correction and even sharpening went into this project. It's easily the most complex restoration I've ever done. It may not be my best work, but I didn't start with the best of sources either, so it doesn't make a lot of sense to beat myself up over it. I came, I saw, I experiemted, and the results were, as Nabeshin once put it, "some success". If that's good enough for him, then damn it, it's good enough for me.

(More screencaps are available HERE, for those interested. What am I, made of bandwidth? And Jewish now, already? Oy.)
at 6:30 PM

Labels: DVD Image Comparison, Fuck AVISynth and the Horse it Rode in on, Melos, Rapidshare, Remaster

Is the project still on? would love to see it.