Tetsuo vs Kaneda: ROUND THREE, FIGHT!!

Record the same sequence, using the same LD player and recorder settings, swapping out S-Video terminals for Composite terminals, to establish what - if any - improvements are made in the process of accessing or bypassing the Toshiba D-R400's own internal 3D comb filter.

After saving lossless PNG screenshots of the test materials, they will be cropped and upscaled to (roughly) the equivalent of a 720p HD video file, so that the results of the experiments can be easily and plainly seen by the naked eye. 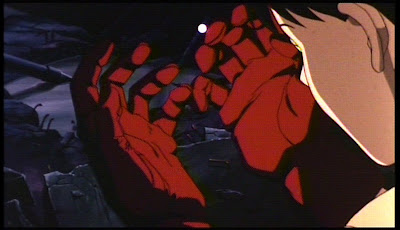 (Recorded via S-Video, cropped and upscaled) 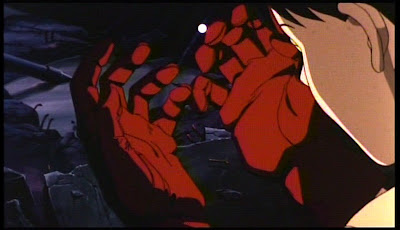 (Recorded via Composite, cropped and upscaled)
It is official, ladies and gentlemen:

Composite video wins!
The dot-crawl infecting Kaneda's gloves literally just disappears via composite. The background details, outlines, and awful moire pattern on Kaneda's face (that pattern is nothing but old fashioned analog noise, by the way) are ever so slightly softened, but it does so much damn good here that I'm not about to complain. And once more, the S-video color looks washed out, blowing out the highlights in his face ever so slightly. Without doing an A/B comparison I doubt I ever would have noticed, but that's exactly why I do these things. Moire patterns like you see in the relatively flat areas of Kaneda's face and gloves are common on 80s and 90s video transfers, and if you're unlucky you'll even find them on older DVD releases, like the Sony R2 of Vampire Hunter D and... well, pretty much any Image Entertainment LD dump, like Bay of Blood or, yes, Akira. The only way to get rid of it is to make a new telecine, which is exactly what Pioneer - and later Bandai Visual - would do with Akira in particular.

I also got some snaps of the color-bar pattern on Akira, but the aboce comparison says so much I won't bother posting them. Once more, S-Video had dot-crawl and was washed out, composite was slightly softer but more natural. All there is to add is that there was NO temporal analog noise, so my suspicion that Wanna Be's was simply a noisy pile of crap thanks to Image Entertainment (and, quite possibly, Sony Music Entertainment) seems all the more likely.

I'll admit that I am slightly disappointed to see that this is how "good" the (arguably) very best American made anime LD ever pressed looks, but this is an issue I have to take with a 30 year old composite video format. I know that I could improve the results - slightly, at least - by adding a Monster hardware comb filter ($500) and an Algolith 3D-NR box ($1500 and up), but considering that this entire rig probably cost 1/10th of that expendature, I'm still very happy.

And so, let the LD transfers flow like a fine wine, and the VHS transfers flow like delicious Monster brand energy drinks! Trust me, if you ever saw the leaning tower of tapes hiding in what should be my linen closet, you'd realize that I'm going to need both. And lots of them, too.
at 1:54 AM