That Magical Girl Was Too Sexy For JapanAnime 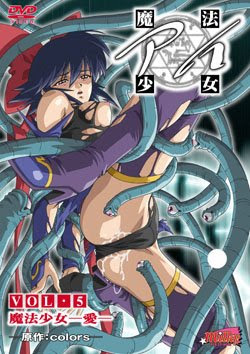 US based cartoon pr0n peddler JapanAnime have released quite a few great titles in the US market, in particular the 4 episode Jiburiru* series, and the first four episodes of SEXY MAGICAL GIRL (who's original Japanese title 魔法少女アイ/Magical Girl Ai, apparently, just wasn't sexy enough for them). The show managed to tickle my fancy by being at once a pandering number of expected ponrographic - and transforming school girl - shennanigans, but consistently lulled the viewer into a false sense of security before pulling everything from gay rape to bloody and brutal magical-girl beatdowns, leaving the viewer unprepared as to if they're supposed to laugh or cringe. It was one of Milky's better looking titles, at that, and ranks (easily) as one of the very best supernatural hentai titles since Hininden Gausu and Inma Seiden.

*That title should be 'Jibriel', a pun on the biblical name "Gabriel", but by the time the show came out it was far too late. Kitty Media is currently boxing with incompetent Japanese corporate sponsors for the second half of Jiburiru 2, but who knows how that'll all turn out? Also, JapanAnime bugged the second episode of Jiburiru 2, but stopped immediately thereafter and did a new encode without it on the eventual collection. Good for them. Too bad missus Kentai and I are stuck with the single version...

JapanAnime released episodes 1-4 of Mahou Shoujo Ai from 2005 to early 2006, starting about a month before the final episode was released in Japan. Solicitations for the final episode were made, and delays from JapanAnime weren't unexpected, so everyone who cared just sort of assumed that everything, y'know, everything was cool. Delays happen, especially when crazy Japanese executives are watching like hawks over their most expensive properties, and it wasn't like JapanAnime just went into hibernation and stopped release titles completely - that'd come in mid 2007, and they'd only snap back to attention in mid 2008.

Anyway. Late 2006. JapanAnime releases AFTER CLASS LESSONS/放課後 ～濡れた制服～ episode 3, a charming, attractive and just subversive enough remake of the Isaku series to catch my attention... but not all was well with the US release. This particular DVD was zoomed in to delete a potentially "obscene" shot of a girl holding a torn off penis in the series' gruesome and, for the genre at least, terribly ironic finale. The Japanese DVD had to pixelate out the junk in question to avoid Japanese obscenity laws, of course, and now the shot didn't even have anything obscene left in it. As if solely to blow my mind, JA included a screenshot of the missing footage on their website: 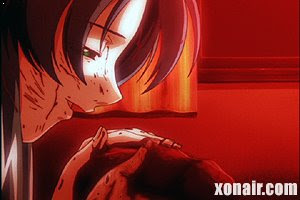 Yum!
When Sexy Magical Girl 5 was delayed again... and again... and again, it was assumed that either Japanese owners Milky were afraid that American reverse importation would kill Japanese sales of the censored and overpriced local version, or that JA simply couldn't afford it. I'm here to show why both theories are bullshit, and there's a very simple reason why JA never released the final episode in the United States.

...oh yeah! Spoilers below. I also spoiled the living shit out of After Class Lessons already, didn't I? Sorry 'bout that folks. But, at least now you don't have to buy it and then wonder why that scene is all blurry.

Best fucking penis-biting that anime has ever known, and we'll never see it uncensored. Ever. Not in a million years, even. Nope. Not a chance. I mean, unless Germany, Spain, France or Italy pick it up. But then it'd be an NTSC-PAL transfer, at the very least. And we all hate those, right? (Which reminds me, I really need to buy the Spanish DVDs of Bondage Game and Corpse Washer one of these days.)

Frustratingly, JapanAnime would later remove a sex scene involving an underage girl in MISTREATED BRIDE/肉嫁 ～高柳家の人々～ as recently as last summer, so there's not much of a reason to assume they're willing to change their stance on graphic castration any time in the future. It's really a shame, since this is one of my absolute favorite adult titles to be released in the last few years, and as it stands I have a lot of trouble supporting the distributor for pussy-footing around controversial content. Sadly, every US based hentai distributor has cut the crap out of a title as one point or another for fear that the offensive content will get somebody riled up and get the owner imprisoned for selling 'Lolita Guro Scatfest 2: Futanari Piercing Love' to an undercover cop with a grudge or a 12 year old boy with a fake ID, so I can't even single JA out as being the root of all evil here. They made it very clear that - at least - After Class Lessons was a title edited to avoid potential obscenity suits, and they had no plans to release it any other way. If After Class Lessons 3 unedited is out, then clearly Sexy Magical Girl 5 (at least without being edited) is off the table for having the exact same content.

I guess I commend them for not editing the title, but only by default. In terms of extras, they didn't have much, and their subtitles - while certainly better than Adult Source Media quite literally stealing their subtitles from existing Chinese bootlegs - were on the "Engrish"side of things. If it weren't for the fact that the show were so spectacular, I wouldn't actually recommend you buy it from them, but the first 4 episodes are so incredible that I advise you to see them - rent them, borrow them, whatever must be done, make it happen. Sadly, you'll never see the last episode... not from them, anyway. As an alternative, you could always buy the Compliation Version on the cheap, which basically cuts all 5 episodes into a single movie. Sure, it's not ideal, but at almost half the price of the final episode alone I can't find a reason not to recommend it.

And yeah, it's pixelated, but good fucking luck finding a copy of vol. 5 that isn't.

Pay no mind to the DVD quality screencaps of an expensive Japanese release, which I may or may not have a subtitle translation, and may or may not be currently timing to said Japanese DVD. I mean, come on, that'd just be crazy! Imagine, me, subtitling a spectacular controversial adult anime with zero chance of a US release and potential commercial name recognition... you guys are just too much.
at 2:11 AM