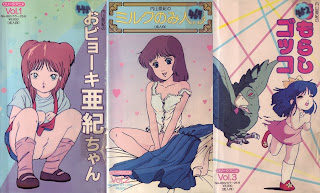 Dusting off translations I made an age ago, not to mention positively ancient VHS recordings, the next Kentai Films project is Nikkatsu's still brow-raising LOLITA ANIME trilogy. The adult OVA series was released in 1985, and managed to share the title with a completely unrelated series produced by the now-defunct Wonder Kids. While the Wonder Kids series was revolutionary for being the first widely distributed pornographic animation ever made, the Fumio NAKAJIMA material was all fairly tame. It was cute, it was sexy, and it was even hardcore, but the stories were never particularly fantastic. In a sense, they were animated pornography solely for the sake of its' novelty, never using the freedom of the medium to push the boundaries and explore fetishes and concepts that were simply impossible in live action adult film.

Nikkatsu's titles, based on the psychadellic mind-babies of Aki UCHIYAMA, are in that sense the complete rejection of Wonder Kids' enjoyable, but safe experimentation. Despite the protagonist of each episode being a young girl named 'Aki', the episodes otherwise share absolutely nothing in common. The story for each episode is as follows:

Vol. 1, Sick Aki-chan - A young child plays in the park, and begins her journey home. Along the way she falls into a rabbit hole to her subconscious, and is assaulted by giant flying sperm tentacles, is force-fed by a two-faced Colonel Sanders, a future revealing R2-D2 with a microphone-penis teaches her that she'll grow up to be a slut, and finally she goes down on a herpahoridite adult version of herself. I'm actually making this out to be far more sane than it really is.

Vol. 2, Milk Drinking Doll - A girl on the edge of adolescence begins to have strange feelings for a fellow teen girl. Realizing her body has changed, she begins to have haunting nightmares of her own repressed desires, among them her crush on a girl, and the bond she wishes she had with her estranged father. WARNING: If you think porcelain dolls are creepy, stay as far away from this OVA as you can.

Vol. 3, Pee Play - A toddler is pawned off on her uncle while, her parents go off on a trip. Her uncle's creepy parrot scares her, and she takes revenge by tormenting the evil bird, but when the girl goes too far, her uncle snaps and tortures the child. Includes a literal pornographic take on the final reel of 2001: A Space Odyssey. And no, I wouldn't lie to you about something like that.

There have been various online "releases" of these titles, but none of them have been subtitled or looked exceptionally good, with Omorashi Gokko (Vol. 3) in particular being VCD resolution on all downloads I've found, and I think that holds true for Milk Nomi Ningyou (Vol. 2), but having the tape before the download became available I never actually checked. There's also an LD sourced version of Obyouki Aki-chan (Vol. 1), but overzealous noise reduction and low bitrate compression have made the whole thing look pretty crumby, if you ask me. Remember kiddies: resoluion is NOT everything. Under the circumstances I'd rather try my luck filtering the VHS copies I have now, and will do just that once the subtitles are finished.

Frustratingly, the final episode has a lot of those vertical stability errors that crop up from time to time on my JVC, which basically make the image shift up and down one frame at a time. Having seen it on several tapes, and often over specific (by which I mean "sexy") sequences therein, I can only assume it's an error that was more often than not caused by some wanker rewinding/pausing/slow motioning the crap out of a certain spot over and over, literally stretching and ruining the tape in the process. (Or maybe they just had really, really cheap VCRs?) I'm dealing with tapes that may have been rented a hundred times over, so minor wear and tear errors like this are something I just have to live with. I also have yet to see any proof that an LD for the third episode even exists, and considering how rare/expensive the VHS tapes go for, it just doesn't seem worth playing a game of video roulette, buying a second copy and merely hoping it's better than the last copy.

Subtitles for episode 1 and 3 have been finished. Episode 2 is in the works, and the whole project should be completed in the next week or two.
at 2:31 AM