The Ultimate Attack in the War on Laser Grain 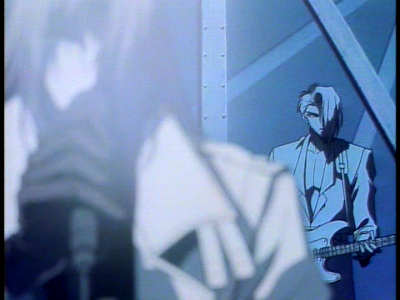 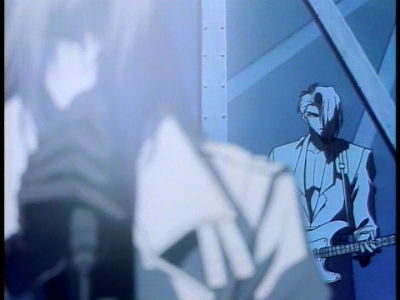 Cathexis LD (Noise Reduction + Comb Filtering)
The grid-like layer of static chroma-noise has all bit disappeared after a level of filtering that, in my eyes, is pretty powerful stuff. But as you can see, despite using a 3D temporal/spatial smoother, fine static details like the guitar strings and rivets remain intact. The left over chroma noise in really dark shots is still pretty blatant, but had Shueisha released this on DVD themselves, I don't think the results would be drastically different. There's some frame blending going on, but it's that very subtle, evil kind that ALMOST has 3:2 cadence, and at the very least the "Image Crip" at the end of the disc was edited on video, so I wouldn't be shocked if some of the cuts in the music videos themselves were made the same way. No progressive transfer this time. Sorry folks.

EDIT: Confirmed that some of the pan shots and "live action" special effects were indeed shot at 30fps.

The only regret I have is that when I use NR and get rid of the glittering chroma noise, it makes what's an MPEG compression artifact all the more visible. But I really dislike having constant analog grain even more, so it's a compromise I'm willing to live with.

In other news, I've done a pretty dramatic overhaul of the RUN, MELOS transfer, upon realizing that Telecide() was screwing the pooch pretty hard for absolutely no good reason. I guess I should learn not to trust programs that rhyme with "genocide", huh? The new transfer will have corrected gamma as well as black/white levels, a different noise reduction scheme entirely, and will be 100% progressive to boot. Once I re-encode it, and am satisfied with the bitrate-to-quality ratio, it'll be a done deal and ready for the masses.

I've also recorded another Image/CPM Laserdisc. After the horrors of WANNA BE's I wasn't expecting much, but this title looks so good that I can't believe the same guys responsible for that virtually unwatchable pile of girl-on-girl violence had really ever touched it. Look forward to that.
at 2:45 AM