William Friedkin Must Not Be Trusted

Don't get me wrong, I really like Friedkin. The Exorcist is, easily, one of the very best horror films of all time. Cruising, after all its' controversy, is a damn good combination of gritty under cover cop drama and uncomfortable sexual ambiguity. I'll admit that I haven't seen Bug yet, but I am very much looking forward to it. 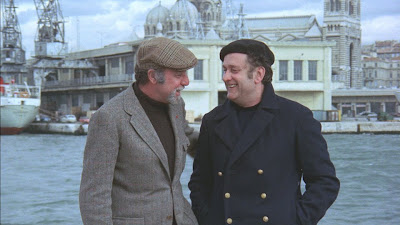 What you see here is a resized snapshot from the camera negative of his 1971 Academy Award winning best picture/best director, THE FRENCH CONNECTION. 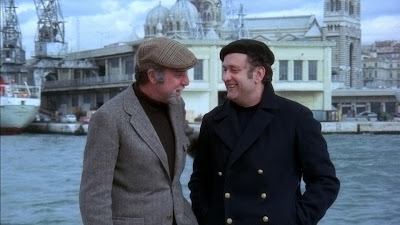 This is what this shot looks like when graded to look like the DVD releases the film has had over the years. The black levels have been crushed slightly, but it makes the shadows under the dock look nice and inky. There's also been a slight blue push, which considering the overcast sky and dockside location seems like a natural choice. Even Friedkin himself says that "most people" probably thinks this looks pretty good. "Most people" are perfectly right in feeling that way. 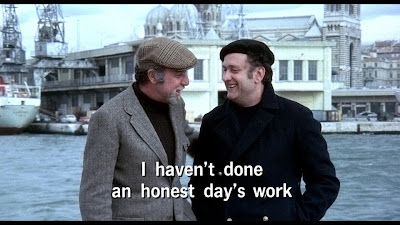 ...you have got to be shitting me.

Friedkin himself explains on a featurette on the new Blu-ray that he was never satisfied with the way the film looked. He argues, perhaps legitimately, that the make-up looked artificial, and that the inexpensive film stock was too gritty to look high budget, so this new Director Approved transfer is a compromise that was made to hide the limitations of the original production.

What he doesn't explain, sadly, is when he lost his fucking mind. The "restoration" on display here is literally nothing more than cranking the contrast and color saturation to the point where the clouds have been obliterated, and nothing but the underlying noise in the film's grain structure is left. It's like a restoration made from a badly worn and faded drive-in reel, except that the Coppola approved The Godfather Blu-ray restoration has already proven that even elements in absolutely horrific shape can be restored to high quality, with enough TLC and money in the mix, at least.

Skin tones have gone from slightly rosy to one step short of decayed, the tops of buildings have disappeared into the bleeding, blooming contrast, and the sharpening filter that went with the color tweaks has only serviced to make a perfect camera negative look absolutely nothing like 35mm film. This is even worse than the dark-as-hell and desaturated HD remaster given to Bram Stoker's Dracula, and is probably just as terrible as the HD remaster given to Suspiria. You don't have to take my word for it, though. Owen Roizman, original director of photography on The French Connection, has this to say:

"Billy [Friedkin] for some reason decided to do this on his own. I wasn't consulted. I was appalled by it. I don't know what Billy was thinking. It's not the film that I shot, and I certainly want to to wash my hands of having had anything to do with this transfer, which I feel is atrocious."

He later went as far as to call it "horrifying", "emasculated", and added "it would be a travesty to see The Exorcist transferred in this fashion." And yes, not only is The Exorcist supposedly coming out on Blu-ray this year, but it was another film that Roizman acted as DP on with Friedkin. Understand that the DP is the guy in charge of checking the lighting, changing lenses, selecting film stock, and usually approve the video transfer since they're assumed to have the most intimate knowledge of how the finished film 'should' look. In many cases, they're just as responsible for 'the look' of a movie as the director himself is (and leaves me doubly impressed when one guy can do both). Here, the DP was a complete non-issue, and for whatever reason Friedkin destroyed the already competent work done for the DVD in favor of something more... well, awful.

The only other Friedkinized video release I can think of is Cruising, which had exceptionally high contrast, a lot of heavy grain, and some rather strange looking psychedelic drug themed optical effects which (as I understand it) were not in the original version of the film. Then again, a disclaimer saying that, 'no, not all homosexuals are perverts or serial killers' was also cut, so nobody was trying to pass it off as the original version of the film. At the time there was talk that the negative was in major disrepair, and this was the best they could do, so I didn't think a lot of it... but I did notice that the trailer looked a hell of a lot better. Evidently Friedkin has grown wary of properly made transfers in favor or a more "gritty" lo-fi look... perhaps because he secretly wishes to helm a Saw sequel?

Much like Perfect Blue, Dragon Ball Z, Dracula and Suspiria, this is an HD "restoration" so shockingly screwed up that I'll be happy to buy it on DVD instead.

I'm now really, really glad that I picked up the "original" DVD release of The Exorcist for peanuts, so I can have a digital frame of rererence for what the film looked like before Billy lost his mind. I doubt the single-layer transfer from 1998 looks particularly good, but I'm still confidend that it looks better than my old letterboxed VHS.
at 9:02 PM