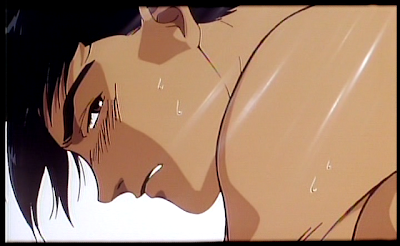 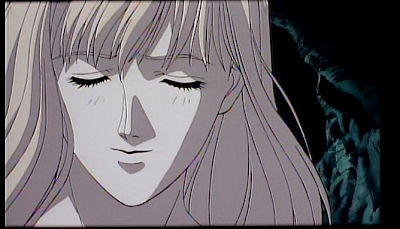 One of many Kentai Archives projects a friend has handed my way, I originally grabbed SHOU Kitagawa's island paradise flight-of-fancy OVA B.B. Fish in the hopes that it could establish if my LD player was even capable of producing a stable, sharp, crap-free image. I'm sure I could point out a host of analog video errors - among them chroma noise, massive ringing, composite rainbows and ghosting* - but compared to every other LD recording that's so far graced this blog, this thing is a goddamn reference title.

I'm torn on wither or not to do a progressive upscale or not. The problem is that despite essentially being a theatrical quality 35mm production, there was clearly a lot of post-production video tinkering. This leaves shots that, even when properly deinterlaced using 3:2 cadence, end up looking like this: 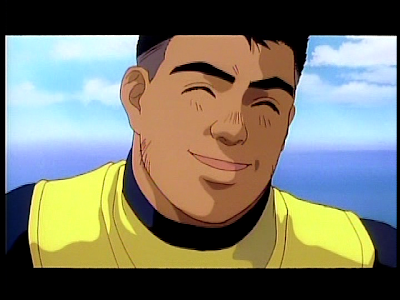 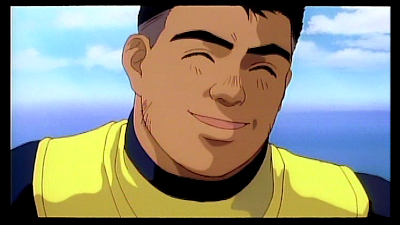 The flipside is that the aliasing is still there on the 4:3 master, it's just less blatant, in part because you'll be deinterlacing it to begin with and adding aliasing in the process. There's no actual combing during any of this (one special effects shot excluded), just horrific aliasing, so as much as I don't like it I don't think I'll let it stop me either. My options are "the whole thing looks like crap" or "certain scenes look like crap"... when you break it down like that, worrying about a little aliasing seems rather pointless.

I think the only thing holding me back is the fear of restoring something with a flaw this obvious (wither I can fix it or not) as 'remastered'. And then I remember that I have no street cred to begin with, and thus have nothing to lose. I've applied some fairly effective de-rainbowing to the upscale, and had to window-box the whole thing slightly to get the aspect ratio to look right, nothing major this time. I could apply some temporal noise reduction and deblocking filters just for good measure, but I think this source and initial compression was stable enough that it would do just as much harm as it would good, so I'm doing my damndest to keep this just the way it is now.

I do have a brand spanking new Kentai DVD finished, but I'm holding off on announcing it until I get all the bugs worked out. Nothing worse than bragging about finishing a disc, only to realize one of the menus doesn't work, or the audio is out of synch, or the subtitles are bright green and too low. If only I were making up any of those problems.

I'm kind of laying low anyway, while I work out the kinks in the process of what may be my biggest "legit" project yet. I won't say much here (do I ever?), but it's not a subtitling gig in any way... it's something much, much more complex than that. Something that could forever change what I do with all my time. It's a little nerve wracking, but I think if it works out the way I'm hoping, it'll be a really good thing for me in the long run.