Fist of the Eastern Star

I got my copy of Discotek/Eastern Star's upcoming FIST OF THE NORTH STAR DVD a little early. It seems as if I have a bit more free time than I'd bargained for, so I figured I'd share both the good and the bad news... 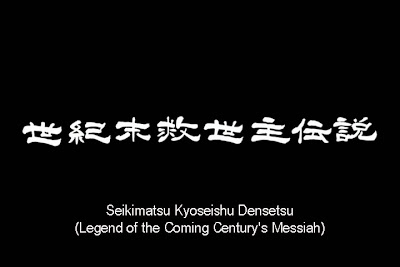 If you can already spot what's wrong you might consider stopping now, just to avoid the SEETHING RAGE!! the rest of this entry will likely cause you.

The same exact transfer used on the Toei Limited Edition Japanese DVD is present on the R1 Discotek Media/Eastern Star DVD. I don't mean "this is a new transfer taken from the same Digibeta", I mean the actual M2V encode and AC3 files appear to be copied and pasted from the Japanese "Multi-Ending" DVD transfer, with new menus and subtitles like built aronud them. Don't mistake this for a complaint: aside from some relatively minor contrast boosting and some noise reduction, Toei's HD remaster for Fist of the North Star is very nice . The original Japanese stereo track is also fantastic. It could probably be a little sharper, but the progressive open-matte 4:3 transfer looks worlds better than any prior video release, even with the minor complaints I have toward the restoration itself. The Japanese stereo mix is equally powerful, and sounds clearer than any incarnation I can remember - though I'll admit I've since sold the Toei LD with digital stereo sound. By comparison the English dub sounds muffled and scratchy, but likely all that has more to do with Streamline Pictures than Toei or Discotek.

The English subtitles are... well, not very good. They're servicable for newcomers, and never so off that the translator just seems to be making shit up as they went along, but compared to the fantastic work done by Neil Nadelman for the TV series - those curious can go to Satan's Bathroom (aka Crunchy Roll) and see his work for free - this translation is awkward at best, and doesn't seem to know what it's talking about at worst. I won't claim to be anywhere near fluent in 日本語 or anything, but certainly I know enough of it to typically tell when a translator is lying right to my face.

But surely it'll get better from here... right? 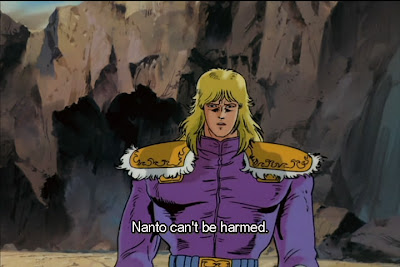 In Japanese, Shin mutters "南斗獄殺拳", or 'Nanto Gokusatsu Ken'. This is a strange (yes, strange in Japanese) combination of Kanji - Chinese characters that Japan appropriated a millenia and a half ago - that means something like 'South Dipper Prison-Butcher Fist'. HARA Tetsuo and Buronson made up these massive kanji clusterfucks to emulate traditional Chinese martial art names, and had characters shout them out as they unleashed these devastating attacks.

The movie mostly did away with these, though the TV series would have at least one example per episode, with the action literally stopping for a moment to let the attacker shout out the name with massive kanji covering the screen. I'll admit it's a strange thing for anyone not intimately familiar with the series to find a proper English equivalent for, but 'Nanto can't be harmed' is most definitely not it. 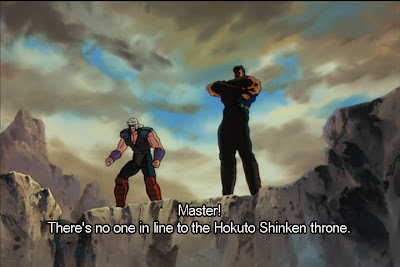 Whoa... what the crap? No, Jagi just said "兄上", or 'aniue', which is a particularly respectful form of "Big Brother". He also calls him simply "Ani", an even less formal word for brother. The four Hokuto Shinken trainees - Kenshiro, Jagi, Raoh and Toki (who's absent in this film adaptation) - were all oprhans raised by Ryuuken as literal siblings. Yes, I am a Flaming Hokuto no Ken fan and all that, but there's nothing about "ani" that shouldn't be translated as brother.
Translating as 'master' doesn't even make sense! I won't even get into "Hokuto Shinken throne" as there isn't one. The Successor is given the title as the sole use and total master of the Hokuto Shinken style, and must uphold the traditions which it stands for. There's no kingdom, no glory, they even sit on the damn floor... in what way is being the damned wandering heir of a killing style a "throne"!? 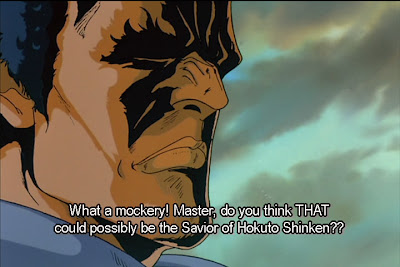 Hey look, they're talking about 伝承者 again! I don't think 救世主 (kyuseishu) - or "Savior" in English - is even mentioned after the opening credits, and much of the translation seems to use "Savior" to mean "Successor". Whoopsie. Once more, a better translation could have been made easy enough. Maybe something like "Brother, does that look like a worthy Master of Hokuto Shinken to you?" Also note the multiple question marks, ALL CAPS WORDS, and Random Capitalized Words. Get used them. They crop up through the entire script. Along with nonsense like "Ooooh".

Adding insult to injury, Jagi's explanation that Hokuto Shinken trainees who fail to become successor is completely misinterpereted. In the dialog, Jagi is effectively telling Raou that if Kenshirou is still considered Master of Hokuto Shinken, then the two of them will have their first broken and their memories erased. The subtitle translation suggests that it's the act of Hokuto and Nanto clashing that would lead to them being crippled!

In the hopes that this scene was merely a botched sequence in the long run, I skipped forward to the scene where Raou shows his power to Ryuuken, beginning his campaign to literally destroy the 2,000 years of Hokuto tradition. The exchange is clunky, but seems all right... for a little while:

This might not seem like a big difference at first, but remember that Japan is primarily a nation of Shinto/Buddhists, and don't have any ingrained belief in a single all-knowing entity. Infact, the first episode of the Hokuto no Ken TV show was titled 神か悪魔か!? 地獄にあらわれた最強の男, or "God or Devil!? The Mightiest Man to Appear in Hell." Raou doesn't believe in God; if anything, he thinks of himself as one, and says in the next scene that he will fight Gods and Devils alike to make the heavens - and by association, everything they look down upon - belong to him.

To be fair, what I've watched so far has been well timed and mostly free of spelling errors, so at least the purely technical side of the subtitles was well done. All I wish was that I'd had the chance to proof-read them... 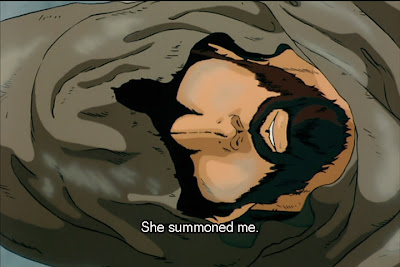 Summon: Kenshiro Lv. 50!
He makes even Neo Bahaumut look like a bitch. 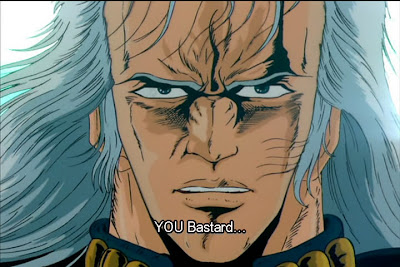 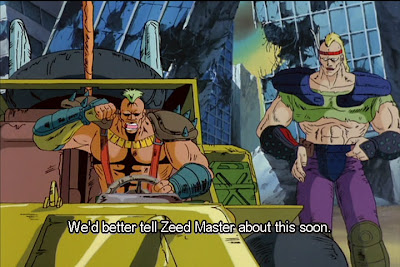 Totally not Engrish in any way. 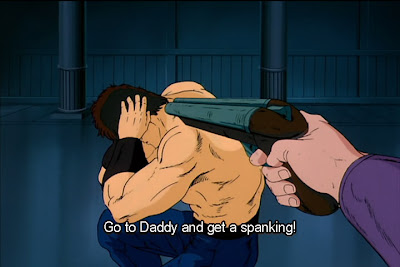 This here is just the freakiest yaoi anime I've ever seen...

When it's not talking about martial arts, family values, or Chinese legends, the subtitle translation seems at least serviceable. For example, the scene where Zeed's forces attack Lin's village and Kenshiro retaliates was almost without issue: there were a couple of poor choices, but it wasn't unjustifiably wrong like so many other scenes around it. Even the bit where the narrator briefly explains the principles of Hokuto Shinken was... well, honestly it's oversimplified almost to the same level as Carl Macek's vintage English dub, but at least it's not pulling anything out of it's ass or reading between lines that never existed to begin with.

And then I found a single subtitle, one so awkward, unintentionally hilarious, and just plain homoerotic that it literally made me hit stop, eject the disc, and decide I'll torture myself with the rest of this mediocre translation another day: 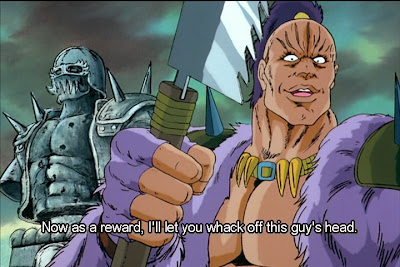 (If only this translation weren't so bad, I'd think that was intentional...)

The extras on the R1 DVD are a letdown too, though at least Toei is solely to blame on that end; Discotek included everything they were allowed, of that I'm certain. We get English text character profiles with included design sheets, a promotional image gallery, vintage TV spots (featuring unique animation!), and finally the theatrical trailer that many fans will recognize from the old Toei LD, and the subsequent Manga International bootleg.

The cover art is very nice, featuring a rather nostalgic spread on the reverse, and a classy collage on the front playing heavily on the brutality of the source material. I'll admit that France wins in the design department with its' stoic blood-splattered black slipcover, but they've had multiple prior releases to get the recent Collector's Edition just right. Menus are still, but well designed and feature the original score to great effect. As with all of the Discotek DVDs I've had the chance to see, the overall presentation is top notch... which makes the very disappointing English subtitles for the feature even more of a surprise.

The Eastern Star release of Fist of the North Star is a mixed bag, though the only thing they can really be faulted for is the subtitles. On the one hand the audio-video presentation are fantastic, and the extras that are included are nice. On the other, the subtitles are mediocre, and are really the one thing on this release NOT featured on the stellar Toei Limited Edition Japanese DVD. If you already bought the LE import, there's little reason to buy this full priced and slightly stripped down port of the same materials. If you didn't, this release is nearly the same thing, but without the multi-ending, promo film (basically a LONG trailer) and booklet. For the $17.24 it's selling for on DVD Pacific, owning a copy of the most fantastic MANime experience ever is still quite a deal, and anyone who doesn't already own a half-dozen copies of this film is urged to pick up a copy... it's jut not the 2 disc liner notes toting perfectly subtitled special edition I've been waiting 8 years for, and for that, I'm a bit disappointed.

My opinion of Discotek has always been one of a dedicated company who releases the very best product possible. Fist of the North Star hasn't changed my opinion of their output, even if it might not be their best release. Eastern Star is off to a frustrating but primarily positive start, and I'm looking forward to their upcoming Crying Freeman box set, and anything else they can license in the world of Japanese animation. The DVD marketplace sucks, and even a flawed release is like a gift from the retail Gods these days, so I'm looking forward to Eastern Star's potential future if titles like this do well.

And don't worry, Crying Freeman already has a competent subtitle translation they can use. 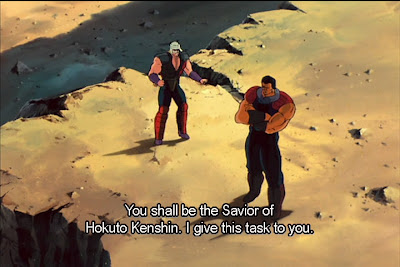 Discotek also get major bonus points in my little black book for releasing Star of David: Beautiful Girl Hunting with an exclusive commentary track, and the first ever anamorphic release of Ebola Syndrome complete with deleted scenes. But that's another entry...
at 4:09 AM

This is a great review. I am just like you in my frustration at what might seem like small things to some people but to me can result in wanting to hit stop. I do not speak Japanese but I can tell when subtitles take the piss. It would be great if you released your corrections as a txt file. That way anyone who owns it could at least watch it on their computers with better subtitles.

Would you ever be willing to go through Akira and uncover anything not right? there are many parts which seem off to me.