Just a little something, to show everyone I'm still doing something besides sitting on the couch and eating bonbons all day long... 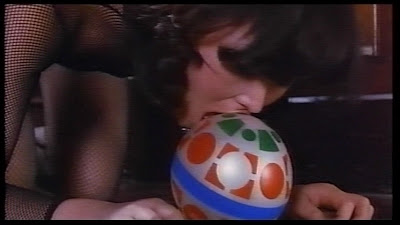 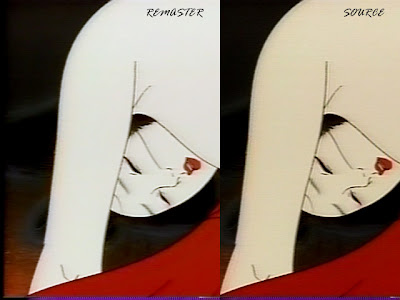 Before/After script results for THE SENSUALIST, Daiei VHS.
Of these two, I think I'm happiest with The Sensualist so far. The color correction has made an okay source into a very good source, and the only real hurdle I can't pass is a matter of noise. Using a more powerful temporal filter would only help the image, which is mostly made up of slow-moving pans and simple animation, but doing so utterly destroys the underlying layer of chroma noise in the dark scenes, turning them into freakish blotchy Rorschach patterns that squiggle with a mind of their own. The current combination of light deblocking and a 3D script intended for broadcast material is passable... not perfect, but as you can see in the skin especially, it's quite a dramatic improvement.

Dorei Keiyakushuu is yet another Nikkatsu VHS; it's grainy, has some temporal smearing, minor tape dropouts and rainbows that refuse to die. In other words, it's nothing out of the ordinary. At least this was a later title from the 1980s, and thus its' presented in its' original 1.85:1 aspect ratio instead of being cut down from scope like the usual vintage epics I work with. The fact that I was able to keep the fine mesh pattern you see above is proof of my love and decication to you, ladies and gentlemen. Expect this up on the usual club soon enough.

A more extensive remaster from a source better than VHS is on the way, but I'm afraid you'll have to wait until I've worked a kink or two out of it. Look forward to that... it'll be a fun comparison.
at 12:04 AM

Greetings,
I just registered and wanted to pop in and introduce myself to the people. Let me just say that it is a fantastic website that you have here.

Here are some other web sites and blogs that might be of interest to you.

I delight in, cause I discovered exactly what I used to be looking for.
You've ended my four day lengthy hunt! God Bless you man.
Have a great day. Bye