Blurring the Line Between Improvement and Insanity

THE GUYVER: OUT OF CONTROL (or "Out of Standard" if you prefer the original Engrish title) is kind of a neat summary of the way in which the anime industry repeats itself for the otaku of each concurrent decade. This hour long OVA from 1986 was a fast paced and exciting adaptation of Bio-Boosted Armor GUYVER/強殖装甲ガイバー manga series created by TAKAYA Yoshiki the year before. It loosely followed every page of the story published up to its' creation, takes quite a few liberties both stylistically and with the plot, but it's an intense, exciting adaptation full of over the top violence and gratuitous manly pop music videos. It's the sort of awesomely ridiculous trash that could have only have come from the Japan in the mid 1980s... it's a period that will be forever missed.

1989. Bandai figures enough time has passed that they can take a second whack at the franchise, and start the OVA series which would be known as The Guyver: Bio-Boosted Armor. A total of two "Acts" were created, each compromising 6 episodes, released 2 per tape. This take was less over the top, and clearly produced on a smaller budget, but it was a more faithful adaptation of the material targeted squarely at fans. The franchise runs for 3 years, which under the circumstances is quite respectable. It also fails for not including bio-rape, but that's a given.

1991. Hollywood takes a crack at the franchise. I'd talk about "The Guyver" (or Mutronics, as our British readers may know it), but I think it's more fun to let YouTube do the talking for me:

Yeah... the fact that this was co-directed by a special effects guru named "Screaming Mad George"is probably cooler than anything that actually happens in the film. But that's all right I guess, it's still better than the live action Devilman movie. (As is a brick to the skull.) Shockingly, this thing got a sequel in 1994, but direct to the Sci-Fi Channel where it could stew in its' own shame alongside the similarly themed Fist of the North Star "inspired" train wreck.

Finally the franchise is dusted off again in 2005. The latest incarnation is darker, more pensive, less graphic than any other incarnation, and features some fascinating use of CG. It also starts with the first chapter, yes, again, and fails to adapt all of the now-epic 25 volume original manga as hard as the last two tries did.

All of these adaptations were drastically different, though I'd argue that all hold their unique charm. Regardless, my favorite was the furiously creative original OVA. And guess what I just recorded fresh from the Japanese LD? Go on, guess! 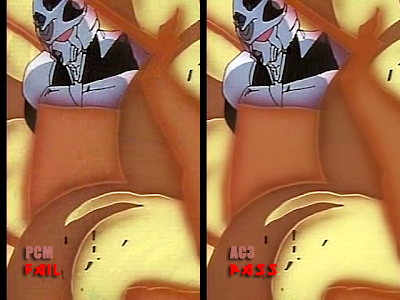 As I've mentioned in the past, the ultimate difference between a video bitrate of 6.3 mbps with PCM and 9.1 Mbps with AC3 is largely negligible, and the real difference is in how the two store their data. The lower bitrate tends to be blocky, as you can see in the explosive clouds, but the higher bitrate tends to be noisier, since it's trying to preserve the source as-is. Of far more importance is wither or not we're looking at an I-frame (less compressed) or a P/B-frame (more compressed), though as those are generated randomly by the real-time encoder there's nothing I can do to control them. 5 years ago, I would have killed for LD capture quality half this good, so I think it just might be time to acknowledge that I'm quite thuroughly licked. Still, wither I want to admit it or not, there's a very slight increase in both sharpness and compression quality using AC3 audio... so, why bother using PCM? For the CD quality audio, right?

CLICK ME! GO ON... DO IT!!
I give you the ultimate test: a short music video from this OVA, featuring both PCM (uncompressed) and AC3 (1:6) audio. You can open this in Media Player or PowerDVD or whatever and decide for yourself if the audio quality is substantially different. Honestly? I'm not feeling it. I know my current cheap-ass-earbuds are hardly reference, but they're sufficient to tell the difference between a 320kbps MP3 and a lossless WMA, so I'm going to consider them "good enough". I'm using Windows Media Player, FFDShow Tryouts and AC3Filter. Seriously, you should too.

Actually getting PCM audio from my recorder is a chore anyway; once recorded and demuxed I have a file that claims to be 64kbps and running several hours long. The flags are just flat out WRONG, and I can't just re-write the flags and wind up with a working file, I actually have to re-encode it using BeSweet. I then have to re-encode the audio a second time in MPEG Video Wizard, for when I remove the extra frames (start/end of a side), for a total of two minimum re-encodes to get what should have been standard goddamn audio in the first place.

Now, re-encoding WAV to WAV is uncompressed to uncompressed, so there shouldn't be any audiable problems (though if there were, I'd never know.) Perhaps the bigger problem is how I'm getting that audio in the first place. LD players only had "digital" audio outs in their later and more expensive incarnations, requiring guys like me using middle of the road players to access the player's DAC, or Digital Analog Converter. It takes the digital PCM audio encoded on the disc and spits out an analog wavelength roughly equalling 48kHz, which my DVD recorder can capture as wither PCM or AC3. But not all DAC's are created equal; not only am I converting the digital signal from analog to get it out of the player, but I'm converting it back to digital once it's going in to the recorder. If either one of the DAC's in the chain is cheap - and God knows they both probably are - that means the sound quality is going to get gimped. By how much? Who knows? But even IF I could output digitally it would be at 44.1 kHz, which is the synch rate used by CD, rather than the 48 kHz used by DVD. In short, it's impossible to keep the synch 100% while keeping the chain digital all the way through, and I'd have to slow it down slightly to match the source video. Doing that would probably eliminate whatever minor audio upgrade I'd have from going "all digital" to begin with.

Much to my disappointment, the glory of uncompressed audio on a DVD recorder isn't all that and an angry H.J. It's still nice that Toshiba included it, and on paper it's a no-brainer, but real-world usage only degrades the video quality slightly and gives only the slightest increase in audio quality.
at 1:43 AM