While I was - and in many ways, still am - quite satisfied with the results I got from playing with The Untold Story, I may have just found a valuable new tool in my fight against god-awful telecines. This is still on a trial basis, mind you, but I think the following results speak for themselves: 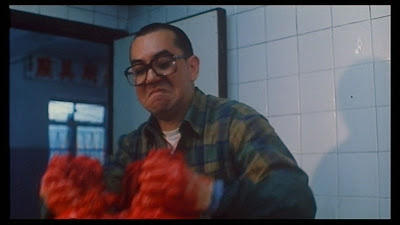 Old Frame
(Note the glue in the upper right corner) 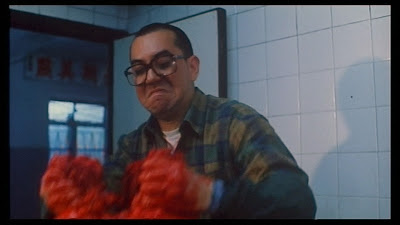 The RemoveDirtMC function has the somewhat pleasant side-effect of subtly de-noising the image, interpreting compression garbage (or, if the source had any, film grain) as "damage", but with The Untold Story being a heavily DNR'ed master devoid of natural film texture in the first place it's only serving my bottom line to get rid of a little bit of the random noisy crap hiding in each and every frame.

The only flaw I'm finding is in that little hole in the wall to the right of Wong's shoulder. Since the camera moves several times in this sequence, any automated program will interpet it as "damage" when it really is not. Unfortunately, the spot disappears and reappears even before I use any dirt removal filters, so merely enhancing the damage that was already done seems a very small price to pay for a chance to automatically remove the larger, more obtrusive spots of film damage from a telecine crawling with it.

Also keep in mind that I'm using very conservative strengths to get rid of what - mathematically speaking - is "clearly" damage. I can crank this thing all the way up to 255, but a setting of 4 (shown above) works pretty well. Setting it up to 10 can do wonders on getting rid of obvious film damage, but it's also hell on the gridwork behind Wong. I'd much rather have to paint away film damage by hand than destroy camera pans, though had this scene involved a plain white backdrop, I probably could have cranked it up with impressive results. A pity.

Special thanks goes to Lyris, who's endless patience with my rambling questions has given me more answers than I probably deserve.
at 4:47 PM