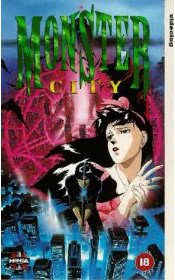 There, I knew that completely retarded UK title wasn't just my imagination!
Well... fuck. Up until recently, the high price of DVD+R DL media had convinced me to back-up dual layer DVD images as a pair of DVD-R discs containing the ROM data. All I'd have to do is put both discs back into the same folder on my HDD, and then either watch, burn, split, or recompress as needed. Seemed like the perfect crime...

Until I realized that I'd not burned one of the VOB files for Demon City Shinjuku. D'oh!

I still have the R2 DVD, I still have the English subtitles I prepared, so creating a new English subtitled version wouldn't be very hard. It just sucks to finally have a couple spare DVD+R DL kicking around and then find that you don't actually have the data I wanted to burn in the first place. So, consider Demon City Shinjuku a Kentai Films title that's currently MIA. And no, the ADC version isn't quite the "final" version, though the differences between the two are minimal if I remember right. 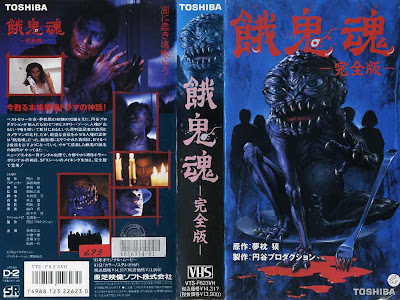 Who wants a hug?
But on to happier news. I've just patched the 55 minute long monster movie 餓鬼魂 GAKIDAMA, a hungry spirit evidently based on the Buddhist legends of the Preta, or Ravenous Ghoul. It was released by Video Search of Miami as "The Tasty Flesh" (LOL WUT? indeed VSoM!), and even had a non-English subtitled VCD in Hong Kong ages ago with the English subtitle THE EVIL WITHIN. But, yeah, just call it Gakidama. Decent little flick, with a lot more psycho-sexual subtext and plot twists than I'd have expected. Yes, I'm talking man-throat-birth. Enjoy that.

Expect another psuedo-horror patch by the end of the week.
at 12:42 PM